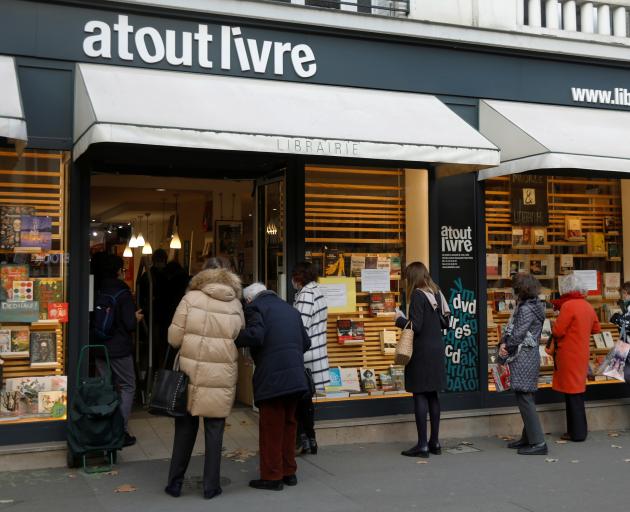 People queue at the 'click and collect' service of a Paris bookshop. Photo: Reuters
France will start easing its Covid-19 lockdown this weekend so that by Christmas, shops, theatres and cinemas will re-open and people will be able to spend the holiday with the rest of their family, President Emmanuel Macron says.

In a televised address to the nation, Macron said the worst of the second wave of the epidemic in France was over, but that restaurants, cafes and bars would have to stay shut until January 20 to avoid triggering a third wave.

After curfew measures in major French cities in mid-October failed to produce the results the government had hoped for, it enforced a one-month lockdown on October 30, though it was less strict than a lockdown that ran from March 17 to May 11.

Positive trends including a decline in hospitalisations for Covid-19 infections, combined with pressure from business lobbies who say they are facing ruin, have led to calls to start loosening the lockdown as soon as possible.

Macron's government is keen to stress to people they should expect only a gradual reopening of the economy.

On Saturday, shops will reopen but people will still need a document to venture out. They will now be allowed to exercise for three hours instead of one, and within a 20km radius of their homes, versus the 1km allowed now.

In mid-December, the lockdown will be lifted if the number of new cases has fallen to around 5000 a day, Macron said, but a curfew would be imposed from 9pm. France registered over 9,000 cases on Tuesday, and crossed the 50,000 deaths milestone.

Many French likely let out a sigh of relief as Macron said people will be free to travel across the country to see their loved ones during the end-of-year holiday and leave home to socialise on Christmas Eve and New Year's Eve, despite the 9pm curfew around these dates.

But no public gatherings will be allowed these evenings and ski resorts won't reopen before January.

"The Christmas holidays won't be the same as before, that's for sure," Macron said.

French officials say people began disregarding social distancing rules too quickly after the first lockdown, leading to one of the most rampant second waves of the virus in Europe.

Critics of the government say it has failed to put in place an efficient test-and-trace system and to instil a sense of personal responsibility among the public, relying on arcane rules decided from the top.

Acknowledging the shortcomings of the testing system, Macron said it would be reorganised so that test results will be available no later than 24 hours after being taken. He also said the government and parliament will have to discuss ways to make the isolation of infected people mandatory.

France will be ready to start a vaccination campaign at the end of December or beginning of January, Macron said, starting with the most vulnerable and older people.

The vaccine, which he called "a glimmer of hope", will not be mandatory, he said.

The government is treading carefully on a future vaccination programme, aware that the French, following a series of public health scandals in recent decades, have some of the lowest levels of trust in vaccines in the world.

PHASE ONE - FROM NOVEMBER 28

• Lockdown will remain in place, but people will be able to exercise outside for three hours a day, versus the one hour at the moment, and within a 20km radius of their homes, versus the 1km radius allowed now.

• Shops selling non-essential good such as clothes, shoes and toys will be allowed to re-open

• Indoor religious services will be allowed to resume, but the number of worshippers will be capped at 30 people.

• A curfew will be in place between 9pm and 7am daily.

• Cinemas and theatres will be allowed to re-open

• Bars, restaurants and cafes can re-open