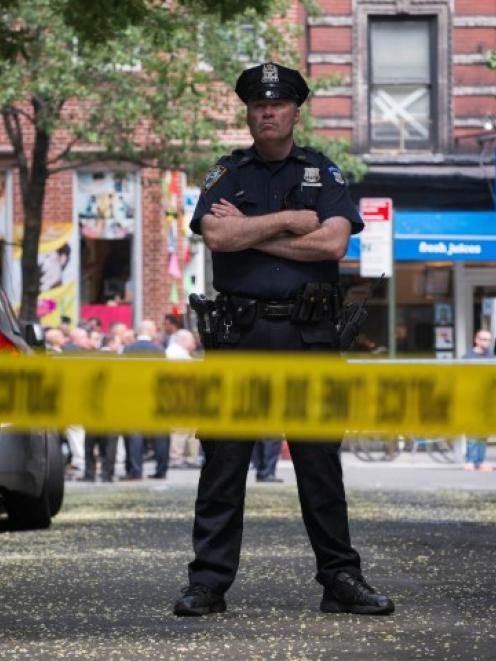 A New York Police Officer stands guard inside a cordoned area at the site of a shooting in Greenwich Village, Manhattan. REUTERS/Darren Ornitz
A suspected child molester from the San Diego area who had been a fugitive for two years has been killed in a shootout in New York City that also left three law enforcement officials wounded, officials said.

Two US marshals and a New York Police Department detective on a US marshals' fugitive task force were hospitalized after being shot in the West Village after trying to "engage" a suspect, Police Commissioner William J. Bratton told reporters.

"What we know at this point is it appears the injuries to the officers are not life-threatening," said Mayor Bill de Blasio at the same news conference, adding that officials were still getting information about what happened.

Local news media in New York reported that the shooting happened in a head shop called Smoking Culture. The Coronado, California, Police Department has identified the suspect as Charles Mozdir of Coronado, who was wanted after skipping a court date for a 2012 child molestation charge.

Mozdir was profiled on CNN's "The Hunt" with John Walsh, which reported that Mozdir was facing allegations of molesting a friend's child.

The parents of the child told CNN that their 7-year-old son told them that Mozdir, a close family friend, had molested him while he was in the same bed as his sleeping mother. Her husband, who was away at the time, had suggested to his wife that she call their friend to help her care for their son. The boy was ill with a high fever at the time and the mother needed to focus on caring for the couple's newborn daughter. Mozdir stayed by the bedside keeping an eye on the feverish child, the father told CNN.

Mozdir posted bail after his arrest and then missed his arraignment on June 15, 2012. A few days later, his car was discovered in Georgia with its license plate torn off, and Mozdir was nowhere to be found, CNN reported.

In New York, Bratton said a gun had been recovered from the scene.

Bratton and de Blasio's remarks came at an unrelated news conference in which both men discussed the need for more police training and better relations with the community after a Staten Island man died after being put an apparent chokehold by police officers.