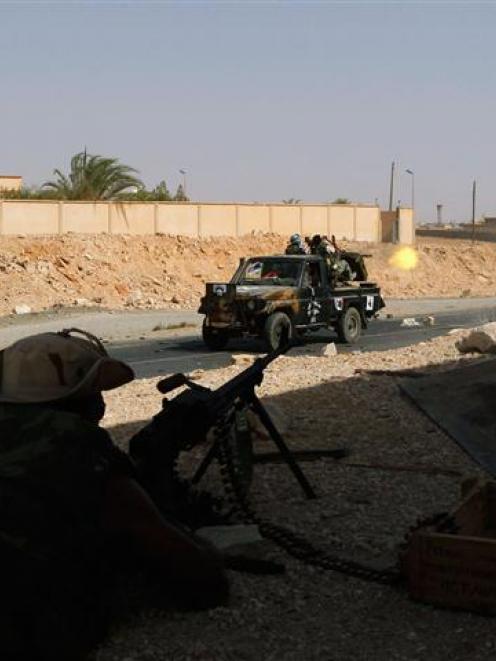 An anti-Gaddafi fighter (front) guards with his machine gun as fellow anti-Gaddafi fighters fire their heavy machine gun towards pro-Gaddafi forces, in the besieged city of Bani Walid. REUTERS/Youssef Boudlal
Diehard loyalists of Muammar Gaddafi unleashed barrages of rockets and mortars to beat back an assault by interim government forces on one of their last bastions in Libya's desert and also held off an advance into his home town.

Forced to retreat from Bani Walid by a heavily armed, well dug-in force estimated at several hundred, columns of fighters in pick-up trucks raced back out of the interior desert town on Friday after a day that began with talk of ending the siege and capturing senior figures from the old ruling elite.

At Sirte on Libya's central Mediterranean coast, forces of the National Transitional Council (NTC) seized the airport on the outskirts of Gaddafi's home town and moved toward pockets of resistance scattered across built-up areas.

But by nightfall, Gaddafi loyalists were still holding out strongly in Sirte and there was no sign of a rapid end to a siege which has dragged on for weeks.

"Gaddafi's troops are between the houses, there are a lot of snipers on the roofs," NTC fighter Mabrook Salem said.

"We attack them with rockets, it makes a lot of damage but it is the best way to control them," he said.

Explosions, staccato gunfire and the whoosh of rockets echoed from the centre of Sirte and black smoke curled into the sky above. NATO planes roared overhead.

Nearly four weeks after the rebel coalition overran Gaddafi's capital Tripoli, the reverse at Bani Walid was a blow to the new leadership, which has said a timetable for drawing up a democratic constitution and holding elections will not start until all of Libya's vast territory is "liberated".

"We have received orders to retreat. We have been hit by many rockets. We will come back later," Assad al-Hamuri, one of the fighters pulling out of Bani Walid, said amid a frantic withdrawal, marked by shouting, anger and disappointment.

"We need to reorganise troops and stock up on ammunition," said another fighter, Saraj Abdelrazaq, as fighting followed a rhythm of ebb and flow familiar since the uprising against 42 years of maverick personal rule by Gaddafi began in February.

"We are waiting for orders to go back in again."

Gaddafi's spokesman, Moussa Ibrahim, in hiding like his leader, was quick to speak after the fighting on Friday, bragging to Syria-based Arrai TV about the NTC retreat and again warning that pro-Gaddafi forces were gathering arms and equipment in preparation for a "long war".

"The battle is far from over," Moussa Ibrahim said. "We assure everybody that the Sirte and Bani Walid fronts are strong, despite the heavy, unbelievable and merciless NATO bombardment on hospitals, families and schools."

Despite the frustrations of trying to capture remaining territory, as well as Gaddafi himself and several of his sons, the North African state's new leaders are getting on with the business of government, seeking to impose order on various irregular armed forces and revive the oil-based economy.

Those efforts received a lift on Friday when the U.N. Security Council eased sanctions, including those on Libya's national oil company and central bank, to enable key institutions to resume operations.

The 15-nation council voted unanimously for a resolution that also establishes a U.N. mission in Libya.

The latest foreign visitor was Turkish Prime Minister Tayyip Erdogan, who hailed the fate of Gaddafi as an example to Turkey's neighbour Syria whose autocratic president has resorted to tanks and troops to try to crush popular unrest.

Erdogan also called on the people of Sirte to give up the fight and make peace.