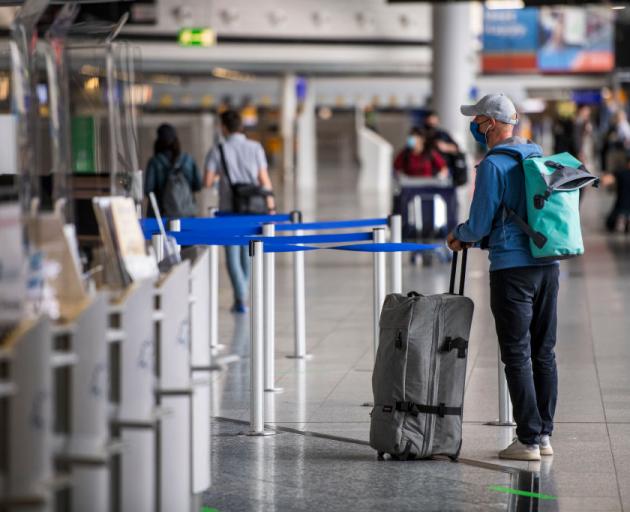 A passenger waits at Germany's Frankfurt Airport. Photo: Getty Images
Germany has lifted its blanket warning against travelling to all countries outside the European Union, although little is likely to change for most travellers under the new regulation.

The cautious reopening on Thursday, agreed by the German cabinet three weeks ago, comes as Europe faces an uptick in Covid-19 cases, with many warning the continent is on the cusp of a second wave of the coronavirus pandemic.

Germany imposed a global travel warning in March this year, when the virus was raging in northern Italy, but lifted it for most European countries in June.

In September, Berlin began reissuing warnings for regions within Europe when infections rose above the level of 50 cases per 100,000 people over a week.

In future, the same standard will be applied to the rest of the world. This means that provided the prevalence of the virus is below that threshold, travellers will be able to return to Germany without going into quarantine pending a negative test.

At present, entry and exit without restrictions will only be possible in parts of Europe and Georgia.

But with more warnings being lifted in the near future, the change could prove significant for non-European tourist destinations that have traditionally received large numbers of visitors from the EU's most populous country.

Special provisions for Turkey, with which Germany has close ties as a result of being home to almost 4 million citizens of Turkish ethnic background, will remain in place.

Travel to several coastal destinations will be permitted so long as travellers take a coronavirus test in Turkey before returning.

The foreign ministry will continue to warn against travel to countries which have imposed restrictions on people arriving from Germany due to their own low prevalence of coronavirus. These include Australia, China, Canada, Rwanda and Uruguay.