Submerged freeways from the effects of Hurricane Harvey are seen during widespread flooding in Houston. Photo: Reuters

Tropical Storm Harvey caused widespread flooding in Houston that inundated homes and submerged highways on Sunday as residents of the fourth most populous US city hunkered down in anticipation of several more days of "unprecedented" rainfall.

Harvey came ashore late on Friday (local time) as the most powerful hurricane to hit Texas in more than 50 years and has killed at least two people.

The death toll is expected to rise as the storm triggers additional tidal surges and tornadoes, with parts of the region expected to see a year's worth of rainfall in the space of a week.

The storm has caused chest-deep flooding on some streets in Houston as rivers and channels overflow their banks. More than 64cm of rain have fallen in some parts of the city, the National Weather Service said, forcing some residents onto their rooftops, while others sought refuge at emergency shelters.

Scenes of rising floodwaters in the sprawling metropolis recalled the devastation that struck New Orleans during Hurricane Katrina in August 2005.

Total precipitation could reach 127cm in some coastal areas of Texas by the end of the week, or the average rainfall for an entire year.

The centre of Harvey was still 200km from Houston and was forecast to arc slowly toward the city through Wednesday. Harvey was downgraded to a tropical storm on Saturday because its winds had slowed, but days of torrential rain are forecast. Texas Governor Greg Abbott told a news conference that new tornado warnings were expected later on Sunday.

President Donald Trump planned to go to Texas on Tuesday to survey damage from the storm, a White House spokeswoman said on Sunday.

The storm struck at the heart of the country's oil and gas industry, forcing operators to close several refineries and evacuate and close offshore platforms. The Gulf is home to about nearly half of the nation's refining capacity, and the reduced supply could affect gasoline supplies across the US Southeast and other parts of the country.

The swift rise of floodwaters surprised authorities, and Houston residents with boats were asked to help with rescues. Emergency services told the city's 2.3 million inhabitants to climb onto the roofs of houses, if necessary, to escape the water. People in Houston and other areas of Texas were asked not to leave their homes, even if they flooded, as roads were impassable.

"The water was right at our door," said Jasmine Melendez, a 23-year-old Houston mother of three, including a week-old infant. "We were also worried about the kids, especially the baby."

Melendez was sheltering at the downtown George Brown Convention Center, where hundreds of people had already shown up for water, food and baby supplies. 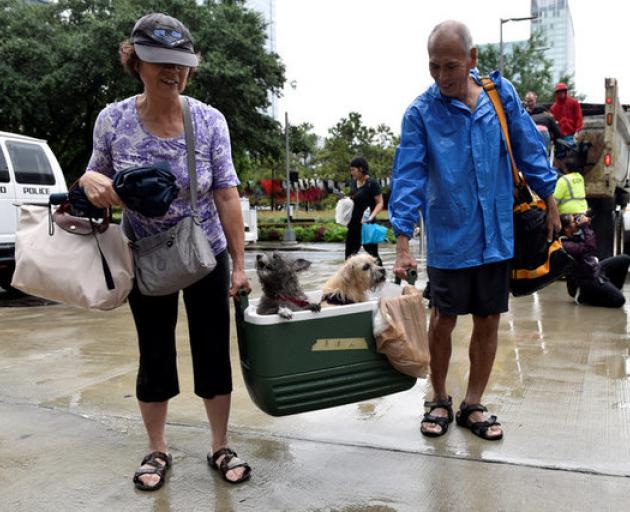 A couple of evacuees carry their dogs into the the George R. Brown Convention Center after Hurricane Harvey inundated the Texas Gulf coast with rain causing widespread flooding. Photo: Reuters

The Harris County Flood Control District said Harvey's impact rivaled that of Tropical Storm Allison, which dropped more than 102cm of rain in Texas in June 2001, flooded 70,000 homes and caused $US9 billion in damage.

"This event is unprecedented and all impacts are unknown and beyond anything experienced," the National Weather Service said on Twitter.

Harvey slammed into Texas as a Category 4 hurricane with winds of 210kph, making it the strongest storm to hit the state since 1961. Harvey ripped off roofs, destroyed buildings, flooded coastal towns and had cut off power to about 280,000 people in Texas as of Sunday.

"Within less than a half hour, we had 7 to 8 inches of water in our first floor," said Brian Hoskins (25) a petroleum engineer who lives in Houston.

Many people were stuck in vehicles on raised highway sections with dips in the roads ahead of them flooded.

Submerged freeways from the effects of Hurricane Harvey are seen during widespread flooding in Houston. Photo: Reuters

"There are a number of stranded people on our streets, calling 911, exhausting needed resources. You can help by staying off the streets," Houston Mayor Sylvester Turner said on Twitter.

Two deaths had been confirmed so far - one in Rockport, 48km north of Corpus Christi, and in west Houston on Saturday.

Millions of barrels per day of fuel production have been halted, and gasoline prices rose ahead of the storm. Benchmark gasoline futures were likely to rise again as shutdowns extended from to the refining hub of Houston, including Exxon's Baytown refinery, the second largest US refinery.

Houston's Bush International and William P. Hobby airports canceled all commercial flights on Sunday. The Ben Taub Hospital in Houston's Medical Center was being evacuated on Sunday. An American Red Cross emergency shelter was forced to shut due to flooding and the group opened two more.

Abbott said 1800 members of the military would help with the statewide cleanup. A further 1000 people were conducting search-and-rescue operations, and several other states were sending emergency personnel.

The size and strength of Harvey dredged up memories of Katrina, the 2005 hurricane that killed 1800 people in a disaster made worse by a slow government emergency response.

Jose Rengel, a 47-year-old construction worker who lives in Galveston, was helping with rescue efforts in Dickinson, Texas, southeast of Houston, where he saw water cresting the tops of cars.

“I am blessed that not much has happened to me, but these people lost everything. And it keeps raining," he said