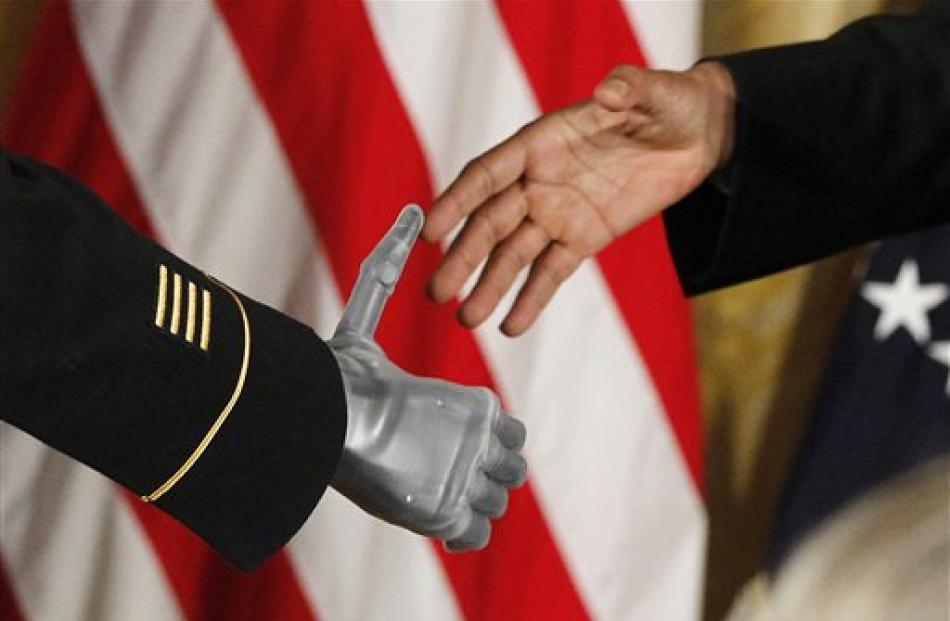 US President Barack Obama shakes the prosthetic hand of Sergeant Leroy Arthur Petry, who received the Medal of Honour for his valour in Afghanistan, in a ceremony at the White House in Washington. (AP Photo/Charles Dharapak) 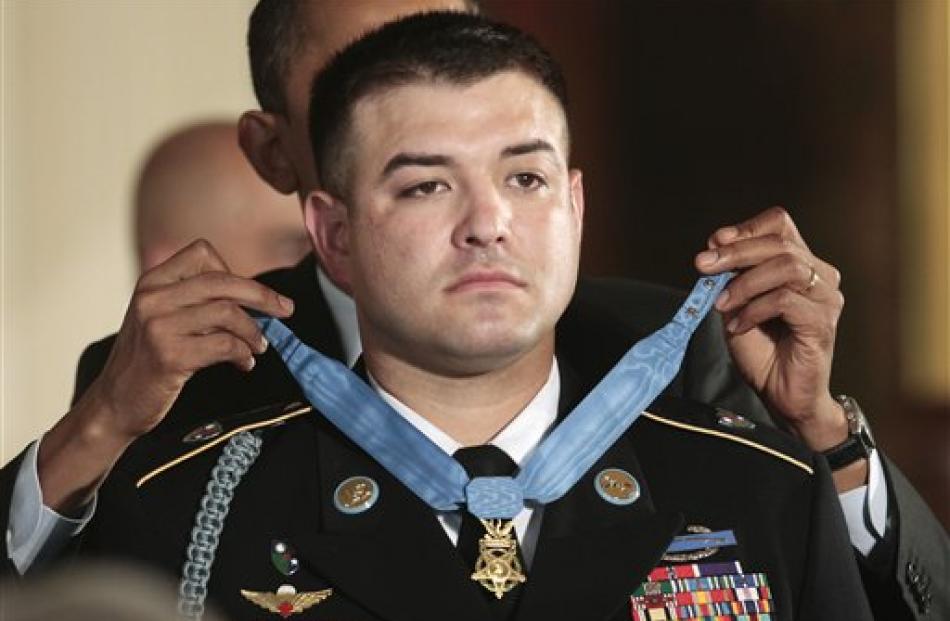 The soldier in uniform extended his prosthetic hand after losing his own in battle. And the commander in chief reached out to clasp it.

It was a sobering moment toward the end of a moving ceremony at the White House, as President Barack Obama awarded the nation's highest military honour to Sergeant First Class Leroy Arthur Petry for his brave actions to protect his comrades in the firefight that cost him his right hand.

"This is the stuff of which heroes are made," the president declared, before reaching out and shaking Petry's gray, robotic hand, which helped the soldier to remain active in the military and even redeploy to Afghanistan despite his serious injury.

Later, Petry, a Santa Fe, New Mexico, native who now serves with the 75th Ranger Regiment at Fort Benning, Georgia, sought to turn attention away from himself and toward other service members and military families.

"To be singled out is very humbling. I consider every one of our men and women in uniform serving here, abroad, to be our heroes," Petry told reporters outside the White House. "They sacrifice every day and deserve your continued support and recognition."

Tuesday was just the second time that a living, active-duty service member from the wars in Iraq and Afghanistan has received a Medal of Honour. Petry looked on from a stage in the East Room with his wife and children in the audience as the president described his heroics that day.

It unfolded on May 26, 2008, in the remote east of Afghanistan, as Petry - then a staff sergeant - and other Rangers choppered toward an insurgent compound, the president said. As soon as they landed they came under automatic weapon fire, and Petry was hit in his legs. He fell, but as grenades came flying toward him and his comrades he picked one up

"This 28-year-old man with his whole life ahead of him, this husband and father of four, did something extraordinary," Obama said. "He lunged forward, toward the live grenade. He picked it up. He cocked his arm to throw it back."

But before Petry could release the grenade it exploded. Petry's right hand was blown off. But two of his fellow soldiers were saved.

Still Petry kept going, applying his own tourniquet and issuing orders to help his unit fight and win, the president said.

Even after the incident in Afghanistan, Petry didn't seek to leave the army, instead staying enlisted and even returning to Afghanistan for an eighth deployment last year, the president said before hanging the Medal of Honour around Petry's neck.

Petry had been assigned to Joint Base Lewis-McChord near Tacoma, Washington, before deploying to Afghanistan. He is still assigned there and works helping wounded soldiers return to civilian life.

Obama also described seeing Petry's prosthetic limb up-close as they met privately in the Oval Office prior to the Medal of Honour ceremony. Petry has bolted a small plaque to his arm with the names of fallen Rangers from the 75th Regiment.

"They are, quite literally, part of him, just as they will always be part of America," said Obama.

The first living, active-duty service member who fought in Iraq or Afghanistan to get the Medal of Honour was Staff Sgt. Salvatore Giunta, who received the honour last fall for his actions chasing down the Taliban in Afghanistan in 2007.