Hiker 'spies' arrive back in US 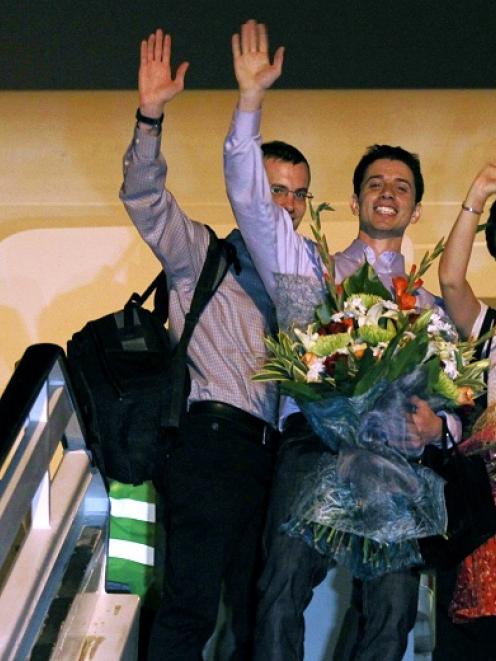 Shane Bauer (L), Josh Fattal (C) and Sarah Shourd wave before boarding a flight in Oman back to the US. Photo: REUTERS/Jumana El Heloueh
Two US citizens sentenced in Iran to eight years in jail for spying have arrived in New York accompanied by family four days after being released by Iranian authorities.

Shane Bauer and Josh Fattal made the last leg of their journey home from Oman, where they had flown after officials there secured their release from Iran with $1 million bail.

Authorities at John F. Kennedy International Airport said the two men would leave from an exit not open to the media.

At the Fattal family home in suburban Philadelphia, neighbours hung a big blue "Welcome Home" banner and posted other homecoming messages in potted flowers. It wasn't clear if or when Fattal might arrive there.

The two men were to appear at a news conference in New York Sunday afternoon.

Bauer and Fattal were arrested in July 2009 near Iran's border with Iraq along with a third American, Sarah Shourd, who was freed last year on medical grounds.

The trio, in their late 20s and early 30s, said they were hiking and denied being spies.

Shourd, who is Bauer's fiancee, was released on $500,000 bail a year ago and allowed to fly home, but the two men were sentenced to eight years in prison last month after a trial behind closed doors.

Iranian President Mahmoud Ahmadinejad agreed to their release last week, saying it was a humanitarian gesture before his annual trip to the U.N. General Assembly in New York.

Bauer and Fattal were first reunited with loved ones in Oman on Sept. 21.

Before departing the Gulf state for home, the hikers expressed gratitude for efforts that led to their release.

"I can't express our joy enough of being here in Oman after the experience we have been through. The joy will stay with us forever," Bauer told reporters at Muscat airport.