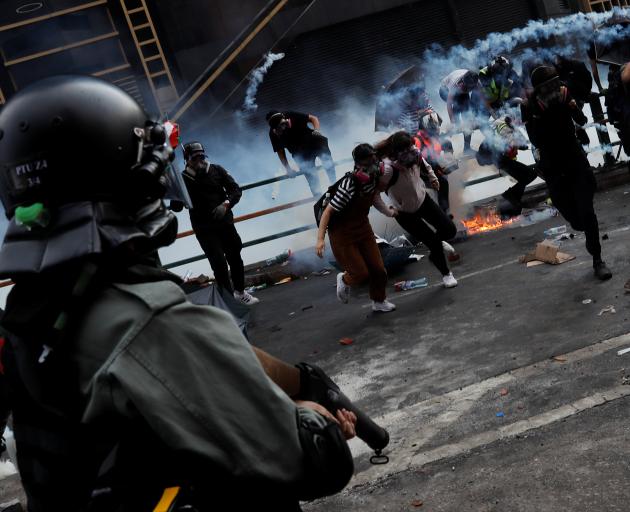 Riot police are seen as protesters attempt to leave the campus of Hong Kong Polytechnic University (PolyU) during clashes with police in Hong Kong. Photo: Reuters
Hong Kong police on Monday trapped hundreds of protesters inside a major university and demonstrators rampaged through a tourist district, after almost two straight days of standoffs that have raised fears of a bloody showdown.

Defiant protesters inside Hong Kong's Polytechnic University faced off against a police water cannon and armoured vehicles  in raging battles that lasted an entire day and through the night.

Morning has broken in #HongKong at Poly U and it’s an awful start - at least hundreds of students are inside that campus... which is on fire. Small explosions every minute. The middle of the campus is quite open so hopefully students can take refuge there pic.twitter.com/4wb95bRUh4

In the Nathan Road area away from the campus, black-clad protesters roamed streets before dawn on Monday, many carrying petrol bombs, while three young women pushed a trolley of petrol bombs down one of the city's busiest tourist districts.

Others dug up paving slabs and used bricks to block roads, some chanting: "Liberate HK, revolution of our time."

A police officer was shot in the calf by an arrow as anti-government protesters, many of them students, responded to police with salvos of petrol bombs and bricks hurled by homemade catapults.

Police threatened to fire live bullets if "rioters" did not stop using lethal weapons in the latest flare-up in anti-government protests that have convulsed the Chinese-ruled city for more than five months.

Scores of protesters were injured, some with scalding burns from chemicals in the jets fired from the water cannon.

The protesters at Polytechnic University had blocked one of Hong Kong's major highways, the Cross Harbour Tunnel linking Hong Kong island to the Kowloon peninsula for much of the past week, with authorities desperate to restore the link yet encountering tenacious resistance from the trapped activists.

As police approached the barricaded front gate of the university in the predawn hours, protesters retreated into the campus while starting huge fires at the gate as well as on a footbridge. 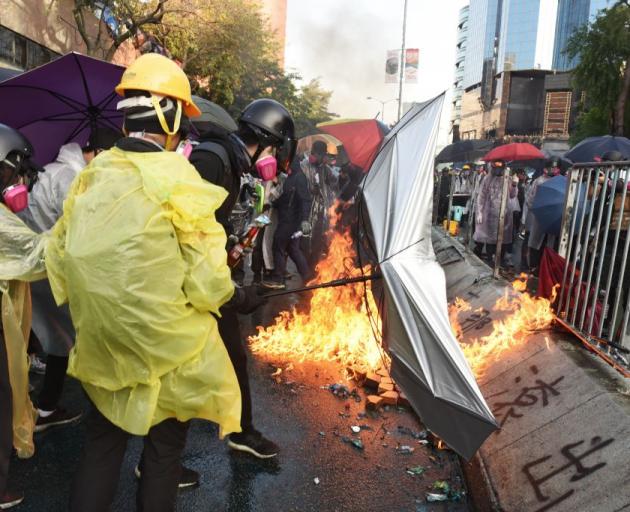 Protesters clash with police during confrontations at the Polytechnic University in Hong Kong on Sunday. Photo: Getty Images

The campus was a flurry of uncertainty and activity on Monday morning. Some protesters discussed trying to leave, while others reinforced barricades and carried boxes of petrol bombs to positions around the complex.

Thousands of residents and protesters flocked overnight to various districts around the university including Tsim Sha Tsui, Jordan and Yau Ma Tei, to try to penetrate the riot-police lines to rescue the trapped students.

"If we can only hold on till dawn, more might come," said one young activist in the university who was close to exhaustion.

The violence in the Asian financial hub has posed the gravest popular challenge to Chinese President Xi Jinping since he came to power in 2012. Xi has said he is confident Hong Kong's government can resolve the crisis.

In Monday's statement, police warned people whom they described as rioters to stop using lethal weapons to attack officers and to halt other acts of violence, saying officers would respond with force and possibly live bullets if necessary.

Demonstrators, angry at what they see as Chinese meddling in the former British colony that has had autonomous status since returning to Chinese rule in 1997, have said they are responding to excessive use of force by police.

"The protesters have been reacting to the police," said Joris (23) a civil engineer who like others did not give his full name. "We haven't fought back as much as we could. I would be prepared for jail. We are fighting for Hong Kong."

Beijing denies interfering in Hong Kong's affairs and has blamed foreign influences for the unrest.

Many others trapped on the sprawling red-brick campus close to the city's harbour, said they would never surrender.

"We’ve been trapped here, that’s why we need to fight until the end. If we don’t fight, Hong Kong will be over," said Ah Lung, a 19-year-old protester.

Many protesters wore gas masks or tied handkerchiefs over their mouths and noses to protect themselves from clouds of tear gas. Some stripped down to their underwear, after earlier dousings from water cannon that witnesses said contained an irritant.

An armoured police vehicle that was set ablaze by petrol bombs in Sunday's violence was towed away early on Monday.

The spectre of a bloodier standoff has caused some international concern.

Former British Foreign Secretary Malcolm Rifkind said in a statement: "Hong Kong's Chief Executive has the responsibility to do everything possible to prevent a massacre. She must order the police to use restraint."

Chinese soldiers in a base close to the university were seen on Sunday monitoring developments with binoculars, some dressed in riot gear.

Chinese troops in shorts and T-shirts, some carrying red plastic buckets or brooms, emerged from their barracks on Saturday in a rare public appearance to help clean up debris.

The presence on the streets of soldiers from China's People's Liberation Army (PLA), even to clean up, risks stoking the controversy about Hong Kong's status as an autonomous area.

Chinese troops have appeared on Hong Kong's streets only once since 1997, to help clear up after a typhoon last year.