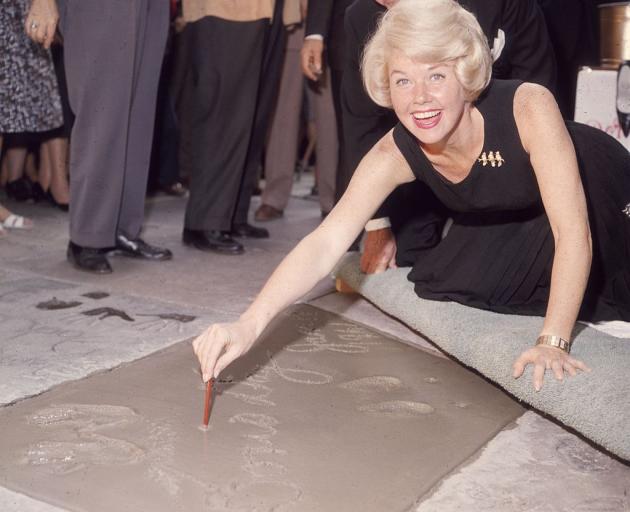 Doris Day signs her name in cement on the Hollywood Walk of Fame in 1961. Photo: Getty Images
Actress Doris Day, who became one of the greatest box-office attractions of her time as the cheery, freckle-faced personification of wholesomeness, died on Monday at the age of 97, her foundation said.

Day, who co-starred with 1950s and '60s superstars such as Rock Hudson and Cary Grant, died at her Carmel, California home after a bout with pneumonia, the Doris Day Animal Foundation said on its website.

Her shiny girl-next-door image was built on a series of innocent romantic comedies, including Pillow Talk, for which Day received an Oscar nomination, That Touch of Mink and The Thrill of It All.

Day also had hit records, most notably Que Sera, Sera from the movie The Man Who Knew Too Much. It became her theme song, even though she had initially been reluctant to record it.

“Doris Day isn’t so much timeless as ageless -- forever remembered as the fresh-faced star with a smile to match.” The legendary actress and recording star from the “Golden Age of Hollywood” died at 97 on Monday. @LeeCowanCBS looks back https://t.co/xAz8Qdru0C pic.twitter.com/9PeB9Rn2A5— CBS Evening News (@CBSEveningNews) May 13, 2019

Day's life was not always as sunny as her movie roles. She married four times, was divorced three times and widowed once, suffered a nervous breakdown and had severe financial trouble after one husband squandered her money.

"My public image is unshakably that of America's wholesome virgin, the girl next door, carefree and brimming with happiness," she said in a memoir, "an image, I can assure you, more make-believe than any film part I ever played. But I am Miss Chastity Belt and that's all there is to it."

"She's the girl every guy should marry," a critic wrote in the Saturday Review. "Marilyn Monroe, Elizabeth Taylor, Kim Novak? They'd all be trouble. Doris Day would be true blue, understanding, direct, honest, and even a little sexy."

Tributes to her memory poured in from fellow entertainment giants.

Former Beatle Paul McCartney said Day was a "true star" who had "a heart of gold."

"I will miss her but will always remember her twinkling smile and infectious laugh," McCartney said on his website.

"She was a wonderful friend to us and a lovely and very talented lady," singer Tony Bennett said on Twitter. "We will miss her beautiful smile."

Doris Day in New York in 1946. Photo: Library of Congress/Handout via Reuters

Day was born Doris von Kappelhoff on April 3, 1922, in Cincinnati and headed to California at age 14 to be a dancer. She abandoned that dream after her right leg was broken in an auto accident.

She then concentrated on singing and at 16 had a job with Les Brown, one of the top orchestra leaders of the day, and recorded her first hit, Sentimental Journey, with him. She changed her surname at the suggestion of a band leader who heard her sing Day by Day.

At 17, Day married Al Jorden, a trombone player who she later claimed beat her. Her only child, son Terry, was born in 1942, and the couple divorced the following year.

A series of musicals followed with Day often playing a singer trying to break into the entertainment world: My Dream Is Yours in 1949, It's a Great Feeling in 1949 and Tea for Two in 1950.

In 1953, she landed the title role of Calamity Jane, and success continued in 1955 as she teamed with Frank Sinatra for the musical Young at Heart and with James Cagney for the drama Love Me or Leave Me. She expanded her range again in Alfred Hitchcock's remake of his own The Man Who Knew Too Much, which co-starred Jimmy Stewart.

Day returned to light comedy in 1957 with The Pajama Game and two years later first joined forces with Hudson for Pillow Talk, her most popular movie and the one that earned her an Oscar nomination.

She and Hudson made some of the most popular - and profitable - movies of the early 1960s, including Lover Come Back, Move Over Darling and Send Me No Flowers. 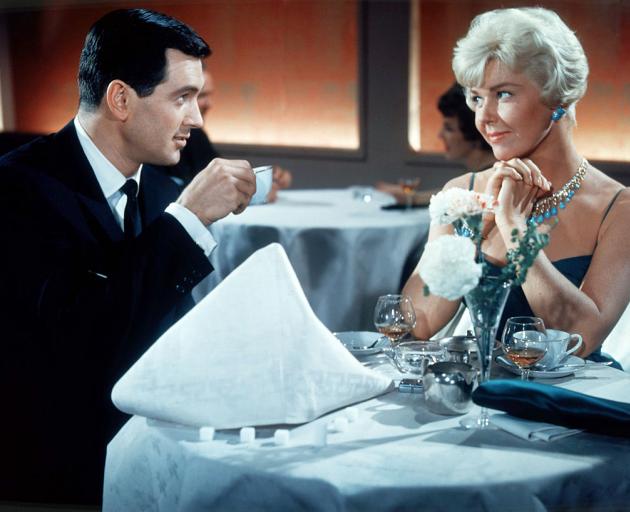 In 1951 Day married agent Martin Melcher and after his 1968 death, she found he had left her nearly penniless.

She had a nervous breakdown in 1974 and then won $US22 million ($NZ33 million) in damages from Melcher's attorney and other associates who had mismanaged her money.

New success came, however, with The Doris Day Show on television, which ran for four seasons. Day did not learn until after Melcher's death that he had committed her to do the show and she was initially reluctant to do it.

She stayed away from entertainment circles for more than 20 years after accepting a lifetime achievement honour from Golden Globe organisers in 1989 but released a CD in 2011.

Proceeds from the recording went to her animal foundation.