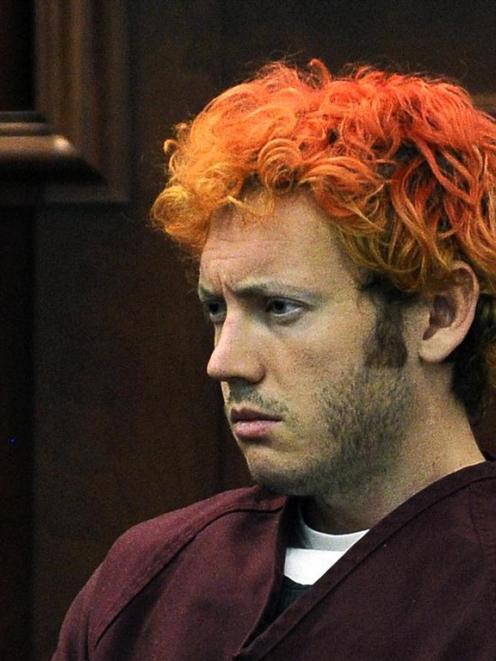 Colorado shooting suspect James Eagan Holmes at his court appearance on July 23. REUTERS/RJ Sangosti/Pool/Files
Accused Colorado gunman James Holmes had conversations with a classmate in March about wanting to kill people, four months before the suburban Denver rampage in which he is accused of shooting dead 12 moviegoers, a court document showed.

"Evidence gathered so far indicates ... the defendant had conversations with a classmate about wanting to kill people in March 2012, and that he would do so when his life was over," prosecutors wrote in the filing.

Holmes, a former neuroscience Ph.D. student, is accused of opening fire on July 20 at a midnight screening of the recent Batman movie "The Dark Knight Rises" in Aurora. In addition to those who died, 58 people were wounded in the attack.

The new document builds on a picture that prosecutors have painted in court of Holmes as a young man whose once promising academic career was in tatters as he failed graduate school oral board exams in June and one of his professors suggested he may not have been a good fit for the competitive Ph.D. programme.

Prosecutors told the court on Thursday in a hearing on whether they can have access to his university records that Holmes had been "making threats and those threats were reported to police."

In the newly published court document, prosecutors added that he lost his access to the University of Colorado Anschutz Medical Campus after making unspecified threats to a professor on June 12, after which he began a voluntary withdrawal from his program.

Prosecutors said Holmes began "a detailed and complex plan" to commit murder and obtain an arsenal of guns and protective armor after he was denied access to the campus.

University spokeswoman Jacque Montgomery said on Thursday that Holmes was not banned from the campus but that withdrawing students typically have their access badges deactivated, effectively denying them access to facilities such as laboratories.

Holmes' attorney Daniel King has said his client suffers from an unspecified mental illness and had tried to get help before the shooting.

Holmes, charged with 24 counts of first degree murder and 116 counts of attempted murder, is being held without bond in solitary confinement at the Arapahoe County jail. Prosecutors have not yet decided whether they will seek the death penalty.