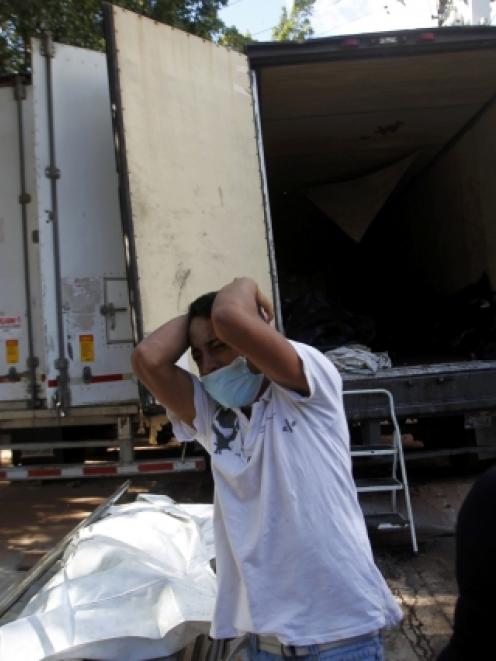 A relative of a prison inmate reacts after seeing body bags containing dead inmates, who died in a Comayagua prison blaze. REUTERS/Jorge Dan Lopez
A devastating prison fire that killed 360 inmates in a Honduran penitentiary was likely caused by a candle or cigarette that set a mattress alight, a Honduran prosecutor said.

Danelia Ferrera, a senior official in the attorney general's office, said an investigation involving Honduran and U.S. agents had found no signs that arsonists set the fire in the Comayagua prison north of the capital, Tegucigalpa.

One of the worst jail block fires in history spread through the prison on Feb. 14, burning prisoners alive or asphyxiating them as they were trapped in their cells.

"The local and international experts that have investigated this episode have concluded that the origin of the fire was an accident, that there was no gasoline, explosions or short circuits," Ferrera said.

"It is suspected that somebody was smoking or had a candle that started the fire. There was no criminal hand."

Honduras requested help from the U.S. Bureau of Alcohol, Tobacco, Firearms and Explosives to assist with the probe, but the agency said it could not yet comment on its findings.

"It's standard practice that ATF teams not comment on details about ongoing investigations," said Lisa Venbrux, a spokesperson for the U.S. Embassy in Honduras. "The U.S. will continue to provide support as the Honduran people deal with the aftermath of this tragic event."

The explanation given by Honduran officials was rejected by some grieving family members camped out near the morgue in Tegucigalpa waiting to identify the bodies of their loved ones.

Suyapa Tejeda, whose husband died in the prison, said she was not convinced that a cigarette or candle could have caused such a catastrophic blaze.

"This was premeditated and they are not going to convince me otherwise," Tejeda said. "They were murdered and they should find those responsible."

Family members have pointed to a number of suspicious circumstances around the fire.

In a video taken by a resident living close to the prison, gunshots could be heard rattling out while the fire blazed.

Police said they were firing warning shots in the air to stop inmates escaping. However, one prisoner told Reuters he saw police officers firing at prisoners.

The local fire chief also said police in charge of the prison did not let his crew enter the penitentiary for about 30 minutes to fight the blaze.

Honduras suffers from the highest murder rate per capita in the world and has more than 13,000 inmates in prisons designed for 8,000 people.

The Central American country has experienced deadly fires in its overcrowded prisons in the past.

In 2003, 68 people died inside a prison in northern Honduras when a fire broke out during a riot and investigators later found guards had killed inmates with machetes and guns on the inside. A year later, more than 100 inmates died in another prison fire in the city of San Pedro Sula.