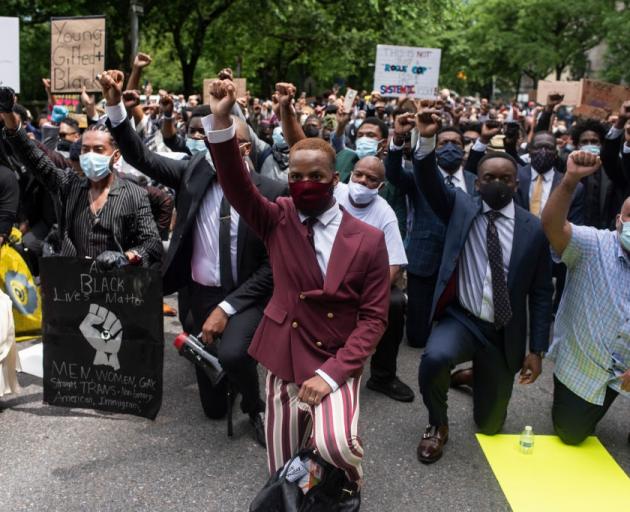 Protesters march to George Floyd's funeral. Photo: Getty Images
Hundreds of mourners in Minneapolis remembered George Floyd today, the black man whose death in police custody set off a wave of nationwide protests that reached the doors of the White House and ignited a debate about race and justice.

Philonise Floyd, one of Floyd's brothers, told a memorial service at a chapel in the Minnesota city's North Central University that their family was poor and that he and George would wash their socks and clothes with soap in the sink and dry them in the oven because they did not have a dryer.

“It’s crazy man, all these people came to see my brother, it’s amazing he touched so many hearts,” said the brother, wearing a dark suit and a badge with a photo of his brother and the words "I can't breathe" on his lapel.

Floyd's death on May 25 has become the latest flashpoint for rage over police brutality against African Americans, propelling the issue of race to the top of the political agenda ahead of the US presidential election on November 3.

Derek Chauvin (44) was fired from the Minneapolis police force and charged with second-degree murder after being filmed in a widely circulated video kneeling on Floyd's neck for nearly nine minutes as Floyd gasped for air and repeatedly groaned, "Please, I can't breathe."

Police say they suspected Floyd (46) of using a counterfeit bill to pay for cigarettes.

Huge crowds have defied curfews and taken to the streets of cities across the country for nine nights in sometimes violent protests that prompted President Donald Trump to threaten to send in the military.

Ben Crump, a lawyer for Floyd's family, told the memorial service that the police action that day was evil.

On Thursday, the three officers charged with aiding and abetting the murder of Floyd made their first appearances in court, where bail was set at $1 million but would be lowered to $750,000 if they agreed to certain conditions, including forfeiting any personal firearms.

In New York City, which has been hit by looting during the protests, thousands of people attended a memorial event in a Brooklyn park for Floyd.

Many knelt in the grass in the afternoon sunshine in a symbol of protest against police behavior and chanted, "No Justice. No Peace."

US Representative Hakeem Jeffries urged people to continue their protests, saying the tragedy has awakened a cross-section of people who would bring lasting change.

US Attorney General William Barr said on Thursday there had been evidence that foreign interests and "extremist agitators" affiliated with left-wing movements like Antifa were taking over the protests. But he offered no details.

The Reverend Al Sharpton, a television political commentator and civil rights activist, told the Minneapolis service that the overwhelming majority of protesters were peaceful.

"There have been protests all over the world. Some have looted and done other things. None of us condone it - looting and violence," Sharpton said.

Services for Floyd are expected to stretch across six days and three states, including memorials in North Carolina and Houston. A funeral is planned for Tuesday.

In another racially charged case that has gained national attention, a court heard on Thursday that one of the white men charged in the Georgia murder of another black man, Ahmaud Arbery, used a racial slur.

"Mr Bryan said that after the shooting took place before police arrival, while Mr. Arbery was on the ground, that he heard Travis McMichael make the statement: fucking nigger," Dial said in testimony to the court.

The protests against Floyd's killing came close to the White House on Monday night when baton-swinging police used heavy handed tactics to drive demonstrators away.

Trump has threatened to send US troops to stamp out civil unrest against the wishes of state governors. That alarmed current and former military officials.

Trump's former Defense Secretary Jim Mattis, after long refusing to explicitly criticize his former boss, denounced any militarization of the response to protests. The US military rarely clashes with the president.

"Donald Trump is the first president in my lifetime who does not try to unite the American people — does not even pretend to try," Mattis, who resigned as defense secretary in 2018, wrote in a statement published by The Atlantic.