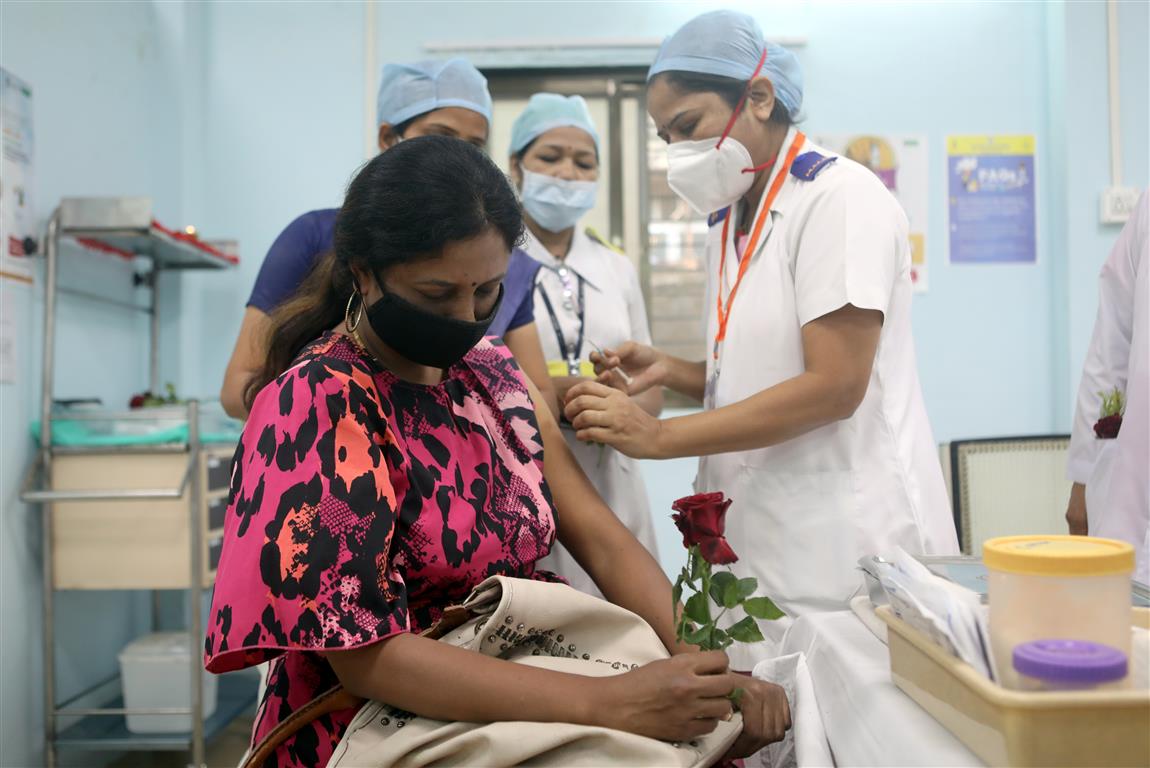 A healthcare worker receives a Covid vaccine shot at a medical centre in Mumbai. Photo: Reuters
Hospital cleaning worker Manish Kumar became the first person in India to be vaccinated against COVID-19 on Saturday, as Prime Minister Narendra Modi launched one of the world's largest immunisation campaigns to bring the pandemic under control.

Kumar received his shot at Delhi's premier All-India Institute of Medical Sciences (AIIMS), one of 3,006 vaccination centres established around the country.

"The vaccine will give me strength and motivation to serve my hospital which has been at the forefront of taking care of coronavirus patients," Kumar said. "Since I'm feeling relieved after taking the vaccine, I think everyone should go for it."

India is prioritising nurses, doctors and other frontline workers, and Modi had tears in his eyes as he addressed healthcare workers via video conferencing.

AIIMS Director Randeep Guleria and V.K. Paul, a top Covid-19 adviser to Modi, were also given the shots in the presence of Health and Family Welfare Minister Harsh Vardhan.

The government is calling its immunisation campaign the biggest in the world and hopes around 300,600 people will be vaccinated on the first day - a first step in administering around 300 million people with two doses in the first six to eight months of the year.

With a population of nearly 1.4 billion people, India is the world's second-most-populous country after China. Some 10.5 million people in India have been infected with the coronavirus, the highest number of infections after the United States, and more than 151,000 have died, though infection rate has come down from a peak in mid-September.

India is using the Oxford University/AstraZeneca vaccine and a government-backed vaccine developed by India's Bharat Biotech whose efficacy is not yet known. People will not be able to choose which of the vaccines - both of which are being produced locally - that they get.

First in line are some 30 million health and other frontline workers, such as those in sanitation and security, followed by about 270 million people older than 50 or deemed high-risk because of pre-existing medical conditions.

The government has already bought 11 million doses of the AstraZeneca COVISHIELD shot, produced by the Serum Institute of India, and 5.5 million of Bharat Biotech's COVAXIN.

COVISHIELD is 72% effective, according to the Indian drug regulator, while Bharat Biotech says COVAXIN's last-stage trial results are expected by March.

While nationalist politicians are cheering COVAXIN, some health experts consider it rushed, as the vaccine has only limited, "clinical-trial mode" approval.

In addition to efficacy concerns, the close monitoring required for its use will be a massive challenge.