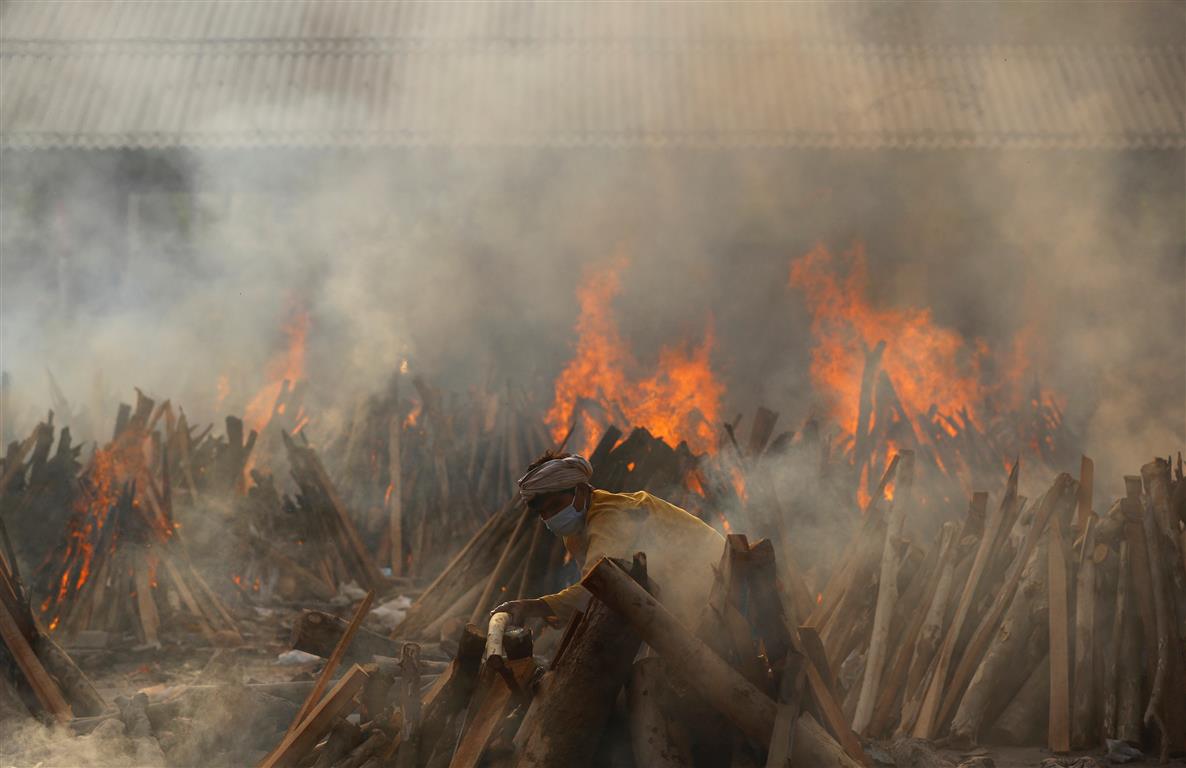 A man prepares a funeral pyre during a mass cremation of coronavirus victims at a crematorium in New Delhi. Photo: Reuters
India on Saturday recorded more than 400,000 new Covid-19 cases for the first time as it battles a devastating second wave, and the country's massive new vaccination drive was hampered in some areas by shortages of the shots.

The surge in infections has overwhelmed hospitals, morgues and crematoriums and left families scrambling for scarce medicines and oxygen. And while India is the world's biggest producer of Covid-19 vaccines, shortages of the shots in some states hindered the opening of vaccinations for all adults.

West Bengal state was unable to start a drive aimed at adults aged between 18 and 45 due to a shortage of shots and urged the federal government to provide more supplies, a senior state health official said, declining to be named as he was not authorised to speak with media.

Arvind Kejriwal, the chief minister of the hard-hit state of Delhi on Friday urged people not to queue at vaccination centres, promising more vaccines would arrive "tomorrow or the day after".

Eastern Odisha state said on Friday it had received a consignment of 150,000 shots but would only allow a few people to get shots due to lockdown restrictions preventing movement.

In Ahmedabad, the main commercial city in Prime Minister Narendra Modi's home state of Gujarat, hundreds of people lined up for their shots.

"I took my first dose and I am appealing to all students to take the vaccine and be safe," said Raj Shah, a 27-year-old student in the city.

Shortages of medical oxygen have plagued the medical system.

In New Delhi's Batra Hospital, local media reported that eight people including a doctor died on Saturday after the facility ran out of oxygen.

At a hearing on Saturday, the Delhi high court took note of the deaths at Batra Hospital and told the federal government to make arrangements for the allocated supply of oxygen to be given to Delhi.

The federal government's counsel told the court: "We are doing maximum to what human limit can go."

Desperate coronavirus patients continued to arrive at hospitals despite a shortage of beds.

Gasping for air, 62-year-old Vijay Gupta was turned away by Holy Family hospital, a non-profit private facility in the southeast of the capital, as all of its 385 beds were full.

His family and friends debated what to do try next.

"We have been roaming around since 6am looking for a bed," said Gupta's friend Rajkumar Khandelwal. "Where shall we go?"

A fire in a hospital about 190km south of Ahmedabad killed 16 coronavirus patients and two staff, the latest in a series of deadly accidents at hospitals.

The Delhi government said it will extend for another seven days a lockdown it first imposed for a week on April 19.

Daily infections have soared since the start of April. Some experts blame mass religious gatherings and political rallies for the severity of India's second wave, which caught the government unprepared.

A forum of scientific advisers set up by the Modi administration warned officials in early March of a new and more contagious variant taking hold in the country, five scientists who are part of the forum told Reuters.

Four of the scientists said that despite the warning, the federal government did not seek to impose major restrictions to contain the spread of the virus. Millions, largely unmasked, attended religious gatherings and election rallies that were held by Modi, leaders of the ruling Bharatiya Janata Party and opposition politicians.

The surge in India has come as many countries are seeing the pandemic ease.

US President Joe Biden on Friday banned most travel from India in restrictions that will take effect from Tuesday.

Other countries and territories have also imposed travel restrictions on India, including Australia, Britain, Germany, Italy and Singapore. Canada, Hong Kong and New Zealand have suspended all commercial travel with India.