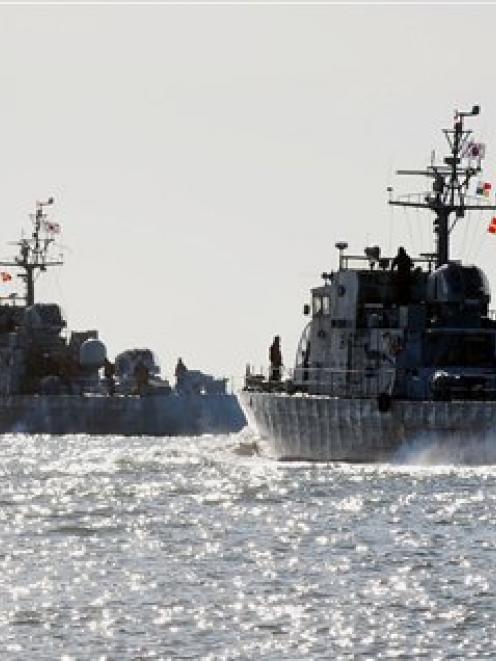 South Korean Navy ships sail near Yeonpyeong Island, South Korea this week. (AP Photo/Yonhap, Kim hyun-tae)
The prosecutor of the International Criminal Court said on Tuesday his office is starting a preliminary examination of possible war crimes by North Korea in response to complaints from South Korean students and citizens.

Moreno Ocampo's office announced on Monday that he had opened a preliminary investigation into the November 23 shelling of South Korea's Yeonpyeong Island and the sinking of a South Korean warship in March, but it was unclear where the complaints came from.

He said his office will now conduct a preliminary assessment to determine whether a full-scale investigation of possible war crimes by North Korea should be carried out.

"We have a duty to assess if the court should intervene or not," Moreno Ocampo said.

He said prosecutors must determine whether the incidents constitute war crimes, whether the court has jurisdiction, and whether the South Korean government is taking legal action.

The International Criminal Court, which began operating in 2002, is the world's first permanent war crimes tribunal. Under the treaty, the court can step in only when countries are unwilling or unable to dispense justice themselves for genocide, crimes against humanity or war crimes.

South Korea is one of 114 countries that have ratified the Rome Treaty that established the court, but North Korea doesn't recognize its authority.

Moreno Ocampo said the goal of the preliminary examination is "just to collect information, to understand what's happened."

How long will that take?

He said his office will offer all parties an opportunity to send information about the incidents "if they want".

The shelling of Yeonpyeong Island killed two South Korean marines and two civilians. Forty-six South Koreans died in the sinking of the warship, the Cheonan. Moreno Ocampo's statement Monday said it was "hit by a torpedo allegedly fired from a North Korean submarine."