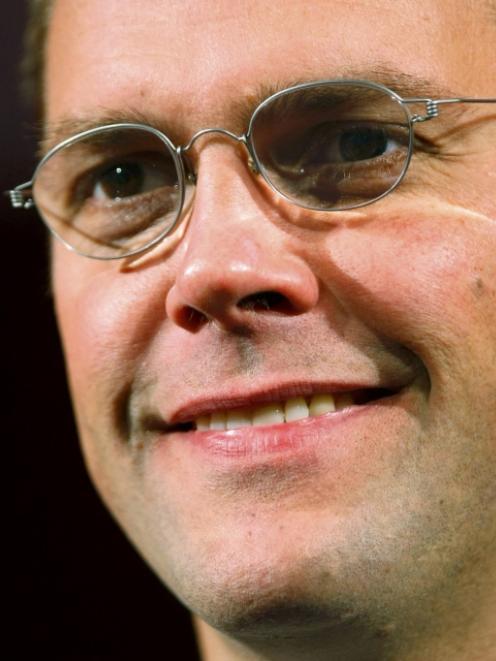 James Murdoch. Photo Reuters
James Murdoch has resigned as executive chairman of News International, raising new doubts he can succeed his father Rupert as CEO of parent company News Corp in the wake of a phone hacking scandal at the unit he oversaw.

It also raises the possibility that one of his older siblings -- Elisabeth or Lachlan -- could emerge as an eventual contender for the top job, according to people familiar with the matter.

Other sources suggested a contrarian view of James' departure from News International, interpreting the move to focus him on operations based out of corporate headquarters in New York as Rupert defying his doubters by bringing his embattled son closer to the company's power centre.

That would dovetail with another counterintuitive move the elder Murdoch made recently: launching a Sunday edition of his tabloid The Sun newspaper in London last week amidst an investigation that had led to the arrest of staff of that paper in addition to those of the now-defunct News of the World.

The younger Murdoch, once seen as heir apparent to his 80-year-old father, has been under pressure since the phone-hacking scandal erupted last summer at the British newspapers. His resignation is the latest in a flurry of senior executive resignations from News International since the scandal came to light.

On James' watch, thousands of celebrities and everyday citizens had their voice mails hacked by journalists at News International newspapers. The company has paid out millions of dollars in settlement fees to date with more expected to come.

James will remain deputy chief operating officer of News Corp with a focus on its international TV business, a New York-based post he was promoted to last year.

The move appears to further strengthen the position of News Corp President Chase Carey, who is now favored by investors to take the top job at the Murdoch family controlled media conglomerate.

"It clarifies the management hierarchy and clarifies Chase Carey as the person who's both No. 2 and No. 3 behind Rupert Murdoch," said Collins Stewart analyst Thomas Eagan. "That's a good thing. I think the operations are going well."

News Corp's shares hit a new 52-week high on Wednesday morning of $US20.35. Analysts and investors have remained ambivalent to the phone hacking scandal throughout the last year, noting that newspapers make up only a tiny portion of News Corp's overall business.

News Corp Chairman Rupert Murdoch said in a statement his son would still play a key role at the company.

The elder Murdoch has spent most of the last two weeks in London overseeing The Sun's Sunday launch. The move was seen as an effort to boost staff morale following an ongoing internal investigation into his newspapers' journalistic operations.

"I think it is clearly regrettable that any of this happened but it did and as a shareholder I believe the company has behaved very responsibly to find the people who were responsible," said Larry Haverty, a portfolio manager at Gabelli Multimedia Funds.

A source familiar with internal company machinations said that even before Rupert Murdoch left for his latest trip to London it was becoming apparent that James Murdoch's prospects to succeed his father at the head of the News Corp empire were fading.

According to the source, powerful company insiders close to the internal investigation News Corp set up to clean up the company's newspaper properties in Britain have come to question James' record heading the unit and his responses to the phone hacking scandal as it unfolded.

As a consequence, Rupert's eldest son, Lachlan, who dropped out of contention as heir apparent as a result of a brutal corporate power struggle that forced him out of the company in 2005, appeared at his father's side when in London last week. But James was nowhere in sight even though he nominally remained executive chairman of the British newspaper interests.

Company sources cautioned, however, that Lachlan is content to continue building his own business back in his native Australia and is uninterested in returning to News Corp at the moment. Still, his father has repeatedly tried to entice Lachlan back into the fold with numerous job offers.

Sources said that daughter Elisabeth Murdoch, whose independent London-based television production company, Shine, was acquired by News Corp last year, has been waiting quietly in the wings and is regarded by some as the current favorite to succeed her father, if any family member ultimately is allowed to make that move.

James Murdoch's resignation comes after a new spate of embarrassing revelations in London at the judge-led Leveson Inquiry into press standards, which was ordered by British Prime Minister David Cameron in the wake of the phone hacking scandal.

A police officer heading three criminal inquiries into reporting practices at News International testified on Monday that there was a "culture of illegal payments" to corrupt public officials at the company's flagship Sun newspaper.

The Inquiry also brought to light an email from a top in-house lawyer at News International that showed senior managers had been told as far back as 2006 that illegal phone hacking was not confined to one "rogue reporter," as the company maintained for years afterward, but was likely to have been far more widespread, as later proved to be the case.