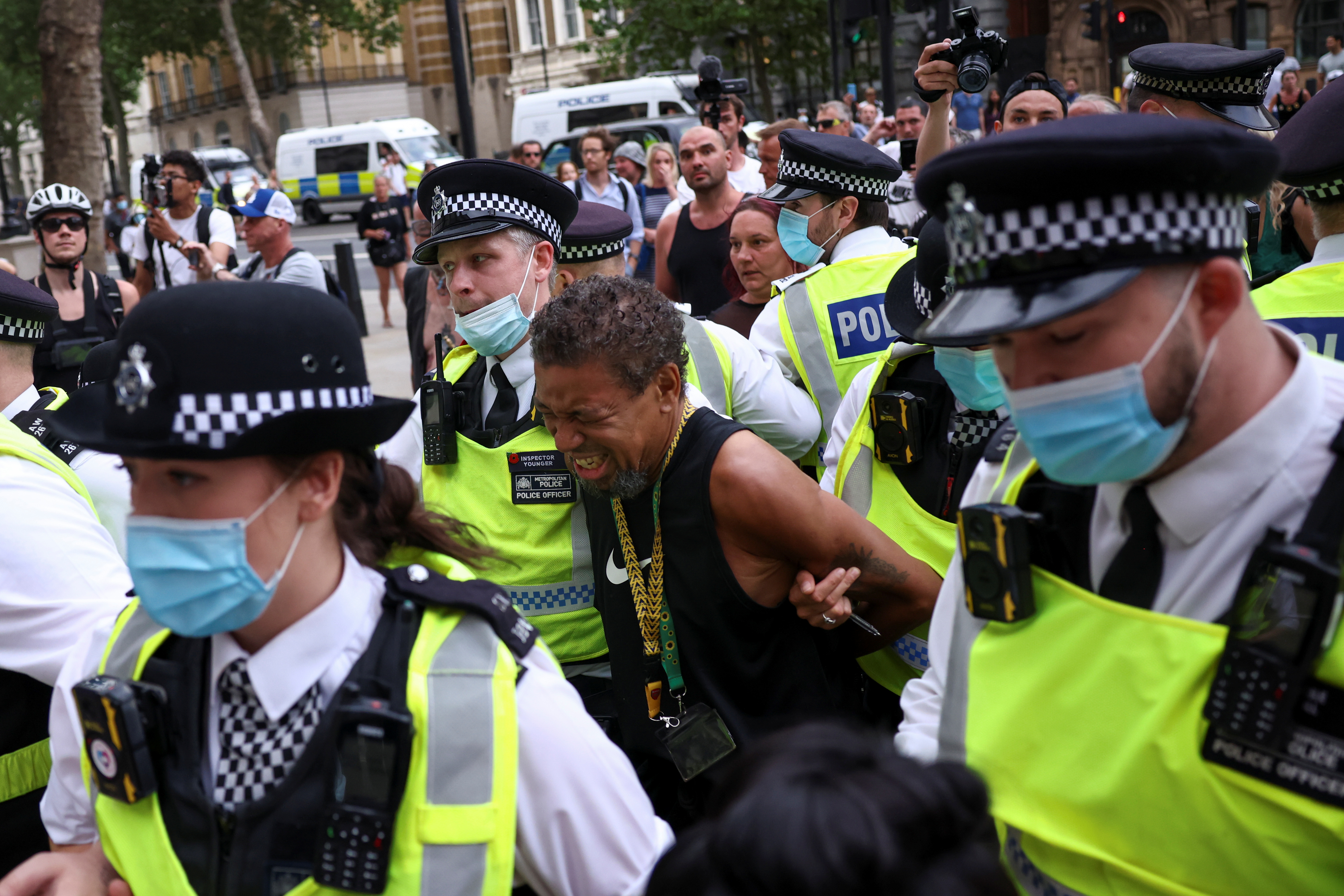 Police apprehend a demonstrator during an anti-lockdown and anti-vaccine protest in London on Monday. Photo: Reuters
Britain's Prime Minister Boris Johnson has delayed his plans to lift most remaining Covid-19 restrictions by a month, warning that thousands more people might die if he did nothing because of the rapid spread of the more infectious Delta variant.

Under the final stage of a plan outlined by Johnson in February this year, he had hoped to lift most social restrictions on June 21, meaning pubs, restaurants, nightclubs and other hospitality venues could fully reopen.

That much-anticipated step was pushed back to July 19.

"I think it is sensible to wait just a little longer," Johnson told a news conference. "As things stand, and on the evidence that I can see right now, I'm confident that we will not need more than four weeks."

The extra time would be used to speed up Britain's vaccination programme - already one of the world's furthest advanced - by shortening the recommended time between doses for those aged over 40 to eight weeks from 12 weeks.

The situation would be reviewed on June 28, which could allow the reopening to be brought forward, although Johnson's spokesman said that was considered unlikely.

In recent weeks there has been fast growth in new cases caused by the Delta variant, first discovered in India.

Health officials believe it is 60% more transmissible than the previous dominant strain and scientists have warned that it could trigger a third wave of infections.

The opposition Labour Party blamed the government for the delay, saying it had been too slow to close borders to travellers from India.

On Monday, Britain recorded 7,742 new Covid-19 cases and three deaths. Johnson said the number of cases was growing by about 64% per week and the number of people in hospitals' intensive care units was rising.

"By being cautious now we have the chance in the next four weeks to save many thousands of lives by vaccinating millions more people," he said.

Britain has officially reported almost 128,000 deaths since the start of the pandemic, the seventh highest number globally.

Monday's decision was based on scientific modelling which showed that, if the reopening went ahead as planned, under some scenarios hospitalisations could match those in March last year when ministers feared the health system could be overwhelmed.

"The four week delay should reduce the peak - whatever it would be - by something between 30 and 50%," the government's Chief Scientific Adviser Patrick Vallance said.

Unlike in March 2020, the increase in hospitalisations was likely to be among younger people who require shorter treatment and are less at risk of dying.

Nevertheless, the risk of increased pressure on the health system meant that the tests the government set out for going ahead with the reopening had not been met.

Johnson sets Covid-19 restrictions for England, with devolved administrations in Scotland, Wales and Northern Ireland making their own policy.

There are no plans to extend new economic help to businesses as a result of the delay, Johnson said. He said current data on vaccines and infections showed no need to do so.

Britain's furlough programme supports just over 2 million jobs and is due to continue until the end of September. But from July employers will have to pay 10% of furloughed staff's wages, rising to 30% in September.

The hospitality industry has also called for an extension of other sector-specific aid. The Society of London Theatre and UK Theatre said thousands of jobs were hanging in the balance.

Despite Monday's delay, the government lifted some restrictions on the number of guests allowed to attend weddings, and will continue pilots of crowds at sporting events and theatrical shows.

Deutsche Bank estimated last week that a four-week delay would temporarily reduce gross domestic product by around 0.25% - a fraction of the historic 9.8% slump recorded in 2020.

It comes despite Britain having one of the fastest vaccine rollouts in the world. More than 41 million people have received their first shot and nearly 30 million have had both doses - about 57% of the adult population.