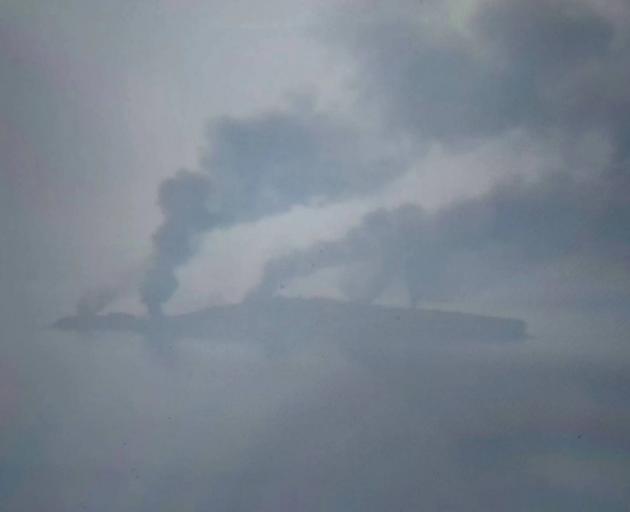 A general view of Snake Island, Ukraine, in this handout still image. Photo: Ukraine Operational Command South/Handout via Reuters
Russian forces abandoned the strategic Black Sea outpost of Snake Island in a victory for Ukraine that could loosen the grip of Russia's blockade on Ukrainian ports.

Russia said it had decided to withdraw from the outcrop off Ukraine's southwestern coast as a "gesture of goodwill" to show Moscow was not obstructing U.N. attempts to open a humanitarian corridor allowing grains to be shipped from Ukraine.

Ukraine said it had driven the Russian forces out after an artillery and missile assault overnight.

In contrast, however, a Ukrainian official in the heavily fought eastern province of Luhansk described difficulties for Ukrainian forces in the city of Lysychansk on Thursday.

"Residents have been told to remain in underground shelters indefinitely as it is very dangerous," Gaidai said.

An official from the pro-Russian separatist administration in Luhansk province told RIA news agency the Lysychansk oil refinery was now fully controlled by Russian and pro-Russian forces, and all roads to Lysychansk were also under their control. Ukraine says the main road out is largely impassable because of fighting, but the city is not yet fully cut off.

Russian forces have been trying to encircle Lysychansk since they captured Sievierodonetsk, on the opposite side of the Siverskyi Donets River, last week after weeks of heavy fighting.

Russia has focused its firepower on capturing cities and towns in the Donbas region, which comprises Donetsk and Luhansk provinces on the border with Russia.

Despite yielding ground and taking punishing losses in the Donbas in recent weeks, Ukraine hopes to inflict enough damage to exhaust Russia's advancing army. Ukrainian forces have been mounting a counter-attack in the south of the region.

Gaidai mentioned Russia's overwhelming advantage in equipment and artillery in the battle for Lysychansk. Ukraine's Western allies have been sending weapons and the Kyiv government was given another boost with the United States saying it would provide a further $800 million in weapons and military aid.

US President Joe Biden, speaking after a NATO summit in Madrid, said Washington and its allies were united in standing up to Russian President Vladimir Putin.

"I don't know how it's going to end, but it will not end with Russia defeating Ukraine," Biden told a news conference. "We are going to support Ukraine for as long as it takes."

Putin said during a visit to Russia's foreign intelligence agency (SVR) on Thursday that one of SVR's main tasks is obtaining information in a timely manner on foreign military and geostrategic plans that may threaten Russia, according to the Interfax news agency.

Snake Island was retaken by Ukraine after weeks in which momentum in the four-month-old conflict appeared to be shifting in favour of Russia.

The Ukrainian military posted an image on Facebook of what appeared to be the island, seen from the air, with several columns of black smoke rising above it.

"The enemy hurriedly evacuated the remains of the garrison with two speed boats and probably left the island. Currently, Snake island is consumed by fire, explosions are bursting," it said.

Ukrainian Brigadier General Oleksii Hromov said Ukrainian forces were not yet occupying the island but would do so.

Lifting the blockade has been a primary goal of the West. US Secretary of State Antony Blinken has accused Russia of deliberately causing world hunger as "blackmail".

Moscow denies blocking the ports and blames food shortages on Western sanctions it says limit its own exports.

"We do not prevent the export of Ukrainian grain. The Ukrainian military has mined the approaches to their ports; no one prevents them from clearing those mines and we guarantee the safety of shipping grain out of there," Putin said on Thursday.

Several military experts said that driving the Russians from Snake Island would not by itself be enough to unblock the ports.

"Does that mean that suddenly the grain flows? No it doesn't really," said Marcus Faulkner, a lecturer of War Studies at King's College London.

New weapons sent by the West made the Russian garrison even more vulnerable, especially HIMARS, a rocket system supplied by the United States which Ukraine began fielding last week. Russia's abandonment of the island was "likely a tangible result of NATO arms deliveries to Ukraine", said Rob Lee of the US-based Foreign Policy Research Institute.