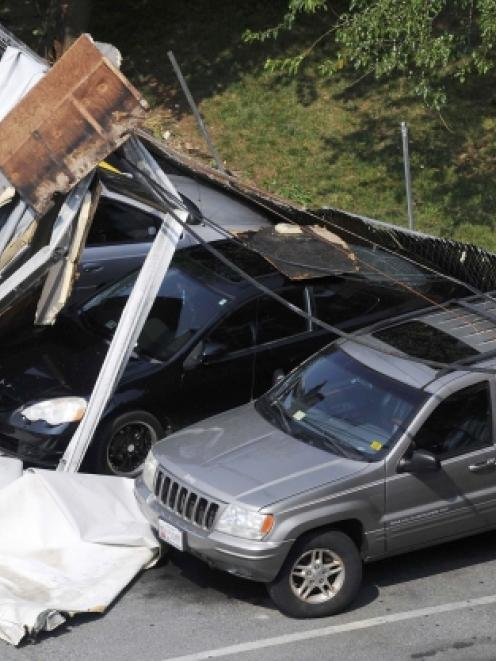 Debris from the storm-damaged Park Tanglewood apartments sits on cars and utility lines in the parking lot in Riverdale, Maryland. REUTERS/Jonathan Ernst
Millions of people across the eastern United States baked in record heat after deadly thunderstorms downed powerlines from Indiana to Maryland, killing at least 12 people and leaving over 3 million homes and businesses without power.

Emergencies were declared in Washington D.C., Ohio, Virginia and West Virginia because of damage from overnight storms, w hich unleashed hurricane-force winds across an 800-km stretch of the mid-Atlantic region.

The storms' rampage was followed by roasting temperatures t hat topped 100 Fahrenheit (37 Celsius) in several southern cities, including Atlanta, where the mercury hit 106 degrees (41 Celsius), and Charlotte, North Carolina, where it reached 102 F (38 C), according to Accuweather.com.

Restoring power in some areas could take up to a week. Utilities in Ohio, Virginia a nd Maryland d escribed s torm damage to their power grids a s catastrophic.

"It's going to be a while before some folks get power, and with the heat, that's our big concern," said Bob Spieldenner, a spokesman for the Virginia Department of Emergency Management.

Six people were killed in Virginia in storm-related incidents, and more than 1 million customers w ere left without power in the worst outage not linked to a hurricane in the state's history, he said.

Two Maryland residents died in the storm, one struck by a falling tree in Anne Arundel County, the other electrocuted after a tree crashed into a house in Montgomery County, said state emergency management agency spokesman Edward Hopkins.

In New Jersey, two cousins aged 2 and 7 were killed by a falling tree in a state park. And in eastern Tennessee, heat was blamed for the deaths of two brothers, ages 3 and 5, in Bradley County. They had been playing outside in 105-degree heat.

In Maryland, about 800,000 customers were without power with outages reported throughout the state, Hopkins said.

Several high voltage transmission lines that carry power long distances were significantly damaged by the storm, he said. "In many cases, it could take up to five to six days for the restoration of services to those lines," he added.

Ohio, where one storm-related death was reported, faced similar difficulties. Outages hit two-thirds of the state with about 1 million homes and businesses left without electricity. Governor John Kasich said it could take a week to fully restore power.

Further north, the storm caused outages from Indiana, where 135,000 customers lost power, to New Jersey where A tlantic County declared a state of emergency and at least 206,000 customers were without power.

The widespread power outages came as the National Weather Service forecast more heat and severe thunderstorms across the Ohio Valley, through the mid-Atlantic states and into New York.

Blazing temperatures in New York, where thermometer readings were in the 90s on Saturday, came ahead of a possible strike by 8,500 Consolidated Edison workers over a new contract.

The union membership has authorized its leaders to call a strike at midnight Saturday, when their collective bargaining agreement expires.

If the 8,500 Con Ed workers do walk off, that would leave managers and any crews the company can hire to fix whatever problems arise as 8.2 million New Yorkers crank up their air conditioners to beat the heat.

Up and down the East Coast, state and local officials urged residents to seek air-conditioned spaces, drink l ots of water and wear light-colored clothing. They also called on people to watch out for those most vulnerable to high heat - the elderly, small children and the mentally ill.

Records for June were broken on Friday in Washington, Atlanta, Nashville, Tennessee and Louisville, Kentucky. The temperature hit at least 104 F (40 C) in all four cities, according to the National Weather Service.

The high heat prompted the AT&T National golf tournament at the Congressional Country Club in Bethesda, Maryland, to close the competition to spectators and volunteers on Saturday.

A representative from Amazon could not be reached for comment. Netflix and Pinterest reported on their Twitter pages by early Saturday that they had resolved their problems.