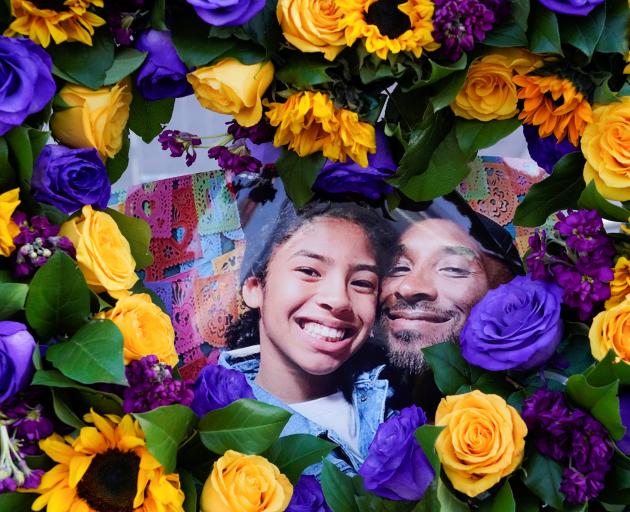 Flowers and photos of Kobe Bryant and his daughter Gianna have been placed near the Staples Center in tribute. Photo: Reuters
Moments before Los Angeles basketball great Kobe Bryant, his 13-year-old daughter and the seven others perished in a helicopter crash, the pilot had tried to climb out of layer of clouds, but the aircraft then banked sharply and lurched toward the ground.

The twin-engine Sikorsky S-76B slammed into a hillside in California, 60 seconds later and burst into flames, killing all nine people on board, according to details of Sunday's crash revealed by federal aviation safety officials.

The death of Bryant (41), an 18-time NBA all-star and one of the most admired athletes around the globe, has sent shockwaves through the sports and entertainment worlds.

Investigators with the National Transportation Safety Board (NTSB) estimated that Bryant's luxury passenger helicopter hit the ground at a speed of more than 2000 feet (610 metres) per minute.

"This is a pretty steep descent at high speed," NTSB board member Jennifer Homendy told a briefing in Calabasas, a town adjacent to the crash scene about 65km northwest of downtown Los Angeles.

"The time from descent to impact was probably about a minute."

Radar data showed that the helicopter had ascended to 2300 feet - "he was trying to climb out of the cloud layer at the time" - and then began a left descending turn before air traffic control lost contact it, Homendy said

Investigators have offered no explanation for what might have led the aircraft to bank abruptly to one side and then plummet to the ground. But Homendy said the estimated rate of descent "wouldn't be a normal landing speed."

"We know this was a higher-energy-impact crash," she said, adding that investigators had surmised that the helicopter was still in one piece before hitting the ground. 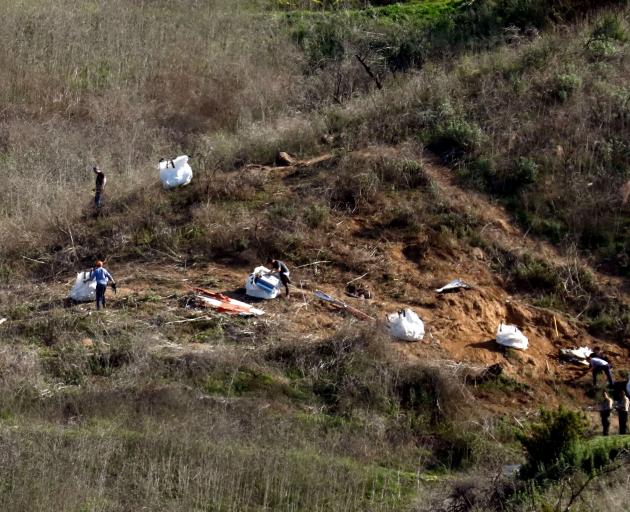 Homendy said that clouds, fog and limited visibility reported in the area on Sunday were a key focus of the investigation, which will take at least a year to complete.

The helicopter was not equipped with any kind of "terrain awareness and warning system," a device that might have alerted the pilot that the aircraft was dangerously close to the hillside, Homendy said.

Nor did the chopper carry a "black box" flight data recorder, which would make it easier to piece together the cause of the crash, she said.

NTSB recommendations that both devices be required equipment on helicopters like the one that crashed on Sunday have not been implemented by the Federal Aviation Administration, she said.

Homendy briefed reporters as authorities completed the on-scene phase of the investigation, clearing the tall, grassy slope of remaining wreckage and human remains.

Among items recovered were an iPad that investigators hope may have belonged to the pilot for use in tracking flight and weather information, Homendy said.

The NTSB team carted a truckload of debris wrapped in large, white tarp bags while medical examiners positively identified remains of four victims, including Bryant and the pilot.

Bryant, who retired from the National Basketball Association in 2016 after 20 years with the Los Angeles Lakers, was on his way to a youth sports academy with his 13-year-old daughter, Gianna. Her team that he coached was due to compete that day in a tournament.

NTSB officials privately briefed relatives of the dead by telephone on Tuesday, but Homendy declined to say anything about what was discussed or who took part in the call. 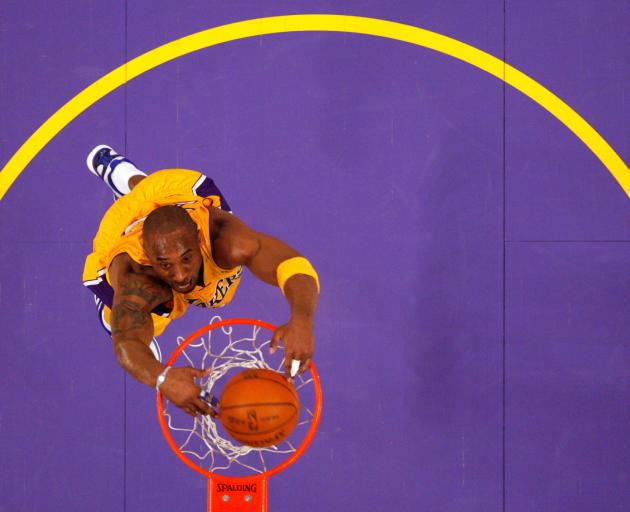 Speaking at the same news conference, Los Angeles County Sheriff Alex Villanueva said positive identifications had been made on four of the nine victims.

Besides Bryant and the pilot, Ara Zobayan, a commercial aviator and certified flight instructor with more than 8200 hours of flight experience, medical examiners confirmed the identities of John Altobelli, an Orange Coast College baseball coach.

A fourth positive identification was made for Sarah Chester, who died in the crash with her 13-year-old daughter, Payton, another basketball player involved in the tournament.

Altobelli's wife, Keri, and their 13-year-old daughter, Alyssa, a teammate of Gianna Bryant, were among the dead, along with an assistant coach, Christina Mauser.

Meanwhile, tributes for the Lakers five-time champion forward poured in, including from Lakers current superstar LeBron James, who surpassed Bryant as the NBA's third-highest all-time scorer the night before Bryant's death.

"I'm heartbroken and devastated my brother!!" James wrote on Instagram on Monday night. "I promise you I'll continue your legacy man!"

The NBA cancelled a game scheduled for Staples Center on Tuesday between the Lakers and the Los Angles Clippers, citing the need to give the Lakers franchise time to grieve. The Lakers will return to the court on Friday in a home game against the Portland Trail Blazers, a team spokeswoman said.

Separately, the Academy of Motion Picture Arts and Sciences said the February 9 Oscars ceremony would include a salute to Bryant.

Earlier in the day, Bryant received a tribute from his onetime basketball coach at Lower Merion High School in Philadelphia, where Bryant played before he was drafted directly into the NBA as a teenager.