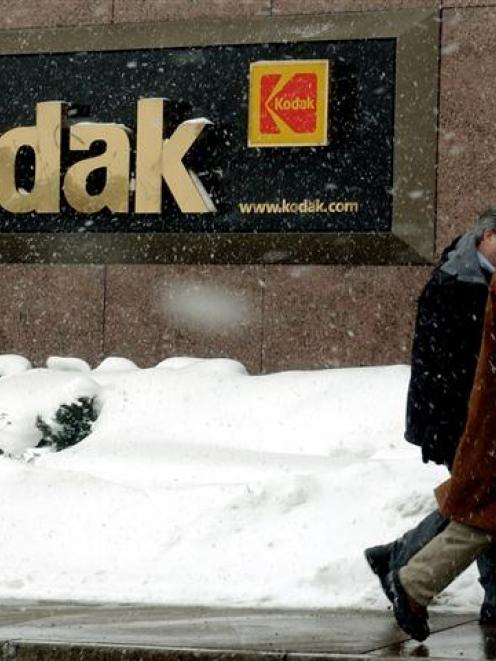 Kodak workers enter corporate headquarters in Rochester, New York, in this file photo. REUTERS/Stringer/Files
Its legacy spans 13 decades, and boasts many American firsts, but Eastman Kodak, best known for cameras and photography, may be running out of options and time.

Concerns about the company's future boiled over today, after it hired a law firm well-known for bankruptcy cases, sending its shares down 54 percent to 78 cents per share.

Although Kodak said it has "no intention" of filing for bankruptcy, the fact that its shares closed under $1, and market capitalisation shrank to less than $300 million suggests that even the most die-hard investors may have lost faith.

The picture began to fade in September 2003. Film sales were dying, and Kodak slashed its dividend by 70 percent, hoping to gain flexibility as it beefed up spending on commercial and inkjet printers, medical imaging devices and other digital systems. It stopped investing in traditional consumer film.

The next year, billionaire financier Carl Icahn ended a brief, but profitable stint as a Kodak shareholder, saying that the company's business model would not work, especially since it needed to shift gears while its primary revenue source, film, was in decline.

"(What Kodak is doing) certainly might not be enough," he said. "I think it is possibly too late."

Kodak has been an iconic name in American business. The company's history stretches back to inventor George Eastman's Eastman Dry Plate Company in 1881. By 1885 he had introduced the the first transparent photographic film. The "Kodak" camera hit the market in 1888, with the slogan, "You press the button - we do the rest."

It rolled out Kodachrome, the first commercially successful amateur color film, in 1935, but George Eastman was unable to see its debut. The ailing Eastman, a pioneering inventor and prolific philanthropist, committed suicide in 1932.

Nearly a century later -- 1981 -- its sales topped $10 billion. It even got in early to the digital camera movement, with its Professional Digital Camera System in 1991 that enabled photojournalists to take an electronic picture with a camera equipped with Kodak's 1.3 megapixel sensor.

Daniel Carp took over as CEO in 2000, right around the time that digital cameras started to become an affordable alternative to film cameras. Taking pictures without the use of film and the option to forgo printing proved a crippling blow to the company, which sold film, photo paper, and the systems that develop film into prints.

But some say that was already too late, since consumers had become enamored with the ease of digital cameras, which allowed then to snap hundreds of photos without film or the need to make prints.

Today, most snapshots are taken with phones and viewed on Facebook, and its tough to remember when Kodak's brand was stronger than that of the social media site. Most iPhone-toting teens have never purchased a roll of film, and have no interest in carting around a stand-alone camera.

In recent years the company has relied on licensing of patents related to photography and printing, as well as sales of commercial and consumer printing systems. In July, Perez said Kodak would sell part of its patent portfolio, which is estimated to be worth more than $2 billion in its entirety.

A dearth of news about the patent sale has contributed to the stock's weakness. The fact that no sale has been announced, shows that the patent's values are a fraction of Kodak's hopes, according to a source close to the matter.