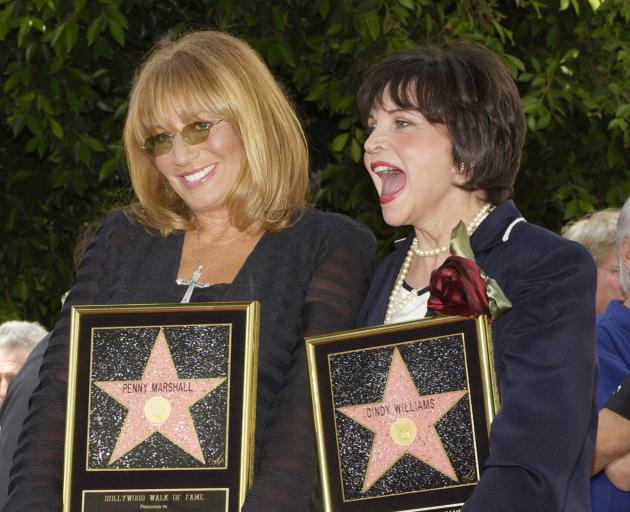 Penny Marshall, and Cindy Williams, who co-starred in the 1970s hit TV series 'Laverne & Shirley', at their Hollwood Walk of Fame ceremony in 2004. Photo: Reuters
Penny Marshall, who played an endearingly graceless character with a thick Bronx accent in US television's Laverne & Shirley before becoming a pioneering film director with hits including Big and A League of Their Own, has died at 75, her publicist said on Tuesday (local time).

Marshall died of complications of diabetes Monday at her home in Hollywood Hills, California, her publicist, Michelle Bega said in a phone interview.

Marshall played the unrefined but lovable Laverne DeFazio on Laverne & Shirley, a situation comedy that ran on the ABC network from 1976 to 1983, following the lives of two single women and their nutty friends in 1950s and '60s Milwaukee.

Marshall, known for her bluntness, described the success of the series this way: "We dared to be stupid."

Marshall, the younger sister of successful TV and film director and producer Garry Marshall, turned to directing after her series ended. Her first film was the underwhelming 1986 Whoopi Goldberg comedy Jumpin' Jack Flash, but that was followed by the charming 1988 hit Big, starring fellow former TV sitcom star Tom Hanks.

Hanks delivered a great performance in the wistful comedy as a 12-year-old boy whose wish to become an adult is magically granted. The film is known for its classic scene in which Hanks and Robert Loggia play duets by dancing on a toy store's foot-operated electronic keyboard.