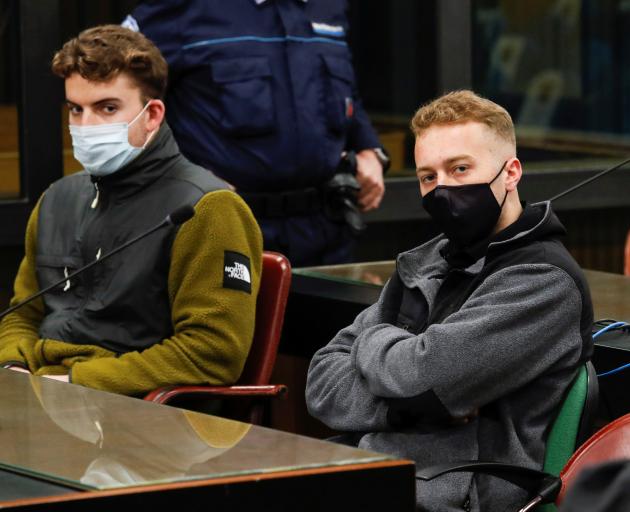 US citizens Finnegan Lee Elder and Gabriel Natale-Hjorth. Photo: Reuters
Two American tourists were sentenced to life in prison by an Italian court on Wednesday for the 2019 murder of a policeman near their Rome hotel in a case that shook the nation.

Finnegan Lee Elder, who was 19 at the time, had admitted to stabbing Mario Cerciello Rega in the early hours of July 26, 2019, while his friend Gabriel Christian Natale-Hjorth, then 18, was tussling with another police officer.

However, the pair say they had acted in self defence because they thought the two policemen, who were not in uniform at the time, were thugs out to get them after a botched attempt to buy drugs.

The court rejected their testimony and handed down the toughest punishment possible in Italy. Under Italy's penal code, criminals serving life terms can be eligible for parole after 21 years, if they have a good behaviour record.

The defence lawyers immediately announced they would appeal.

The two Americans, who come from California, were also found guilty of attempted extortion, assault, resisting a public official and carrying an attack-style knife without just cause.

The pair were quickly led out as soon as the sentence was delivered. Cerciello Rega's widow, clutching a photograph of her dead husband, was in the courtroom and sobbed after the verdict was announced.

Elder and Natale-Hjorth had come to Rome on holiday and tried to buy drugs from a local dealer in a tourist hotspot. They told the court that they were cheated, but managed to snatch a bag off an intermediary as he tried to get away.

They subsequently agreed to meet the dealer again to get their money back in exchange for the bag, but instead the two policemen showed up. Elder testified that the pair attacked them, forcing him and Natale-Hjorth to defend themselves.

The second policeman, Andrea Varriale, denied this and said they clearly identified themselves. He hugged his slain partner's widow following the verdict.

Police say Cerciello Rega, 35, was not armed at the time and was stabbed 11 times by Elder with an 18cm blade that he had brought with him from the United States.

The death of Cerciello Rega, who had only just got married, shook Italy and there was initial disbelief that two US teenagers could be responsible for such violence.

Italian media reported that the drug dealer was an informer who had asked the police to intervene to get his bag back. In a court appearance last September, Elder apologised for what he had done.

Natale-Hjorth initially told police he had not been involved in the killing and did not know his friend had a knife. However, his fingerprints were found on a panel in the ceiling of their hotel room where the blade had been concealed.

Under Italian law, anyone who participates even indirectly in a murder can face murder charges.

"This was a technically flawed sentence both in fact and in law, which cannot be confirmed at appeal, but which has left us shocked," said lawyer Francesco Petrelli, who was defending Natale-Hjorth.

The two Americans have the right to two appeals before their sentence becomes definitive.