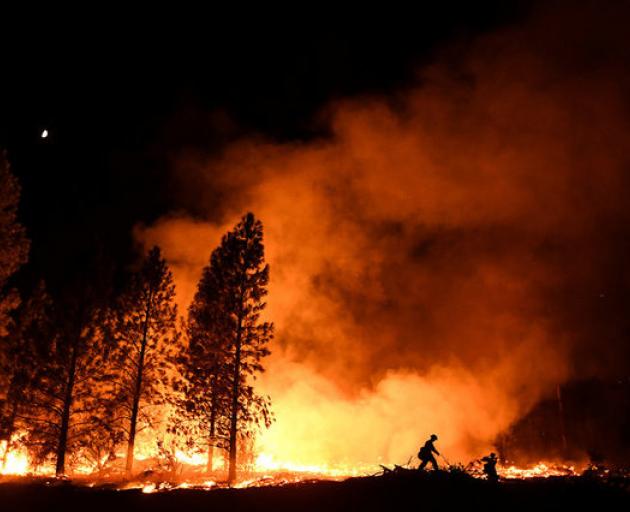 More than 45,000 fires have burned so far this year across the region, 15% more than in 2016, according to the National Interagency Fire Center. Photo: Reuters

Authorities have arrested a 29-year-old man for causing a fast-moving wildfire that has destroyed 10 homes and forced the evacuation of some residents in Northern California, fire officials said on Wednesday (local time).

John Ballenger of the town of Oroville is accused of "recklessly" starting a campfire outside a designated area and allowing it to spread out of control, Cal Fire Butte County Chief Darren Read said in a statement. Oroville is about 110km north of Sacramento.

No further information was disclosed.

Less than 24 hours after it began on Tuesday afternoon, the so-called Ponderosa Fire had consumed about 1000 hectares in Butte County, about 135km north of Sacramento, according to information on the Cal Fire website. In addition to the homes, the fire has destroyed 20 outbuildings.

Another 15 buildings have been damaged by the flames and 500 more are threatened, Cal Fire said on its website.

Photos on social media showed the fire turning houses into ash as smoke billowed into the sky and flames ripped through trees and vegetation.

"My grandparents' house is gone. Everything on their road burned and it feels like losing my grandma all over again," said a Twitter user.

A mandatory evacuation order was placed on residents who live in the remote area. It is unclear how many residents were evacuated. Two shelters were opened for displaced residents, county officials said.

Northern California is facing a heatwave over the next few days with temperatures expected to top 40degC, the National Weather Service said.

Since the beginning of the year, wildfires in the US West have burned more than 2.8 million hectares, about 50% more than during the same time period in 2016.

More than 45,000 fires have burned so far this year across the region, 15% more than in 2016, according to the National Interagency Fire Center.