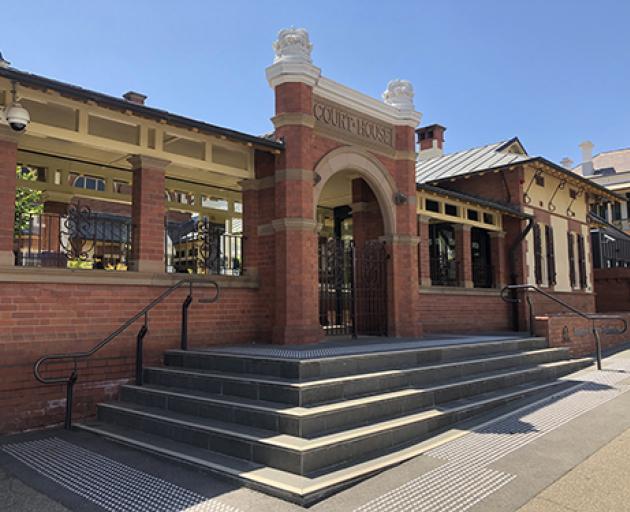 Wagga Wagga District Court. Photo: NSW Courts
Five naked and intoxicated Australian students walking back to their university late at night were threatened by a man with a pistol and hit with a piece of wood.

In jailing their assailant in the Wagga Wagga District Court on Friday, Judge Gordon Lerve said the ordeal must have been terrifying for each of the Charles Sturt University victims.

The male first-year students were taking part in a hazing ritual on the night of March 23, 2020 when confronted by Carl Derek Little at Gobbagombalin.

A jury in September last year found him guilty of detaining four of the victims with intent to obtain an advantage, namely psychological gratification, and occasioning them actual bodily harm.

The now 30-year-old was found guilty of recklessly wounding the fifth student.

Little also pleaded guilty to offences related to breaking into an adjacent motel room in Wagga Wagga in April 2020 and holding the terrified female occupant hostage.

Judge Lerve jailed him for nine years and nine months with a non-parole period of six years and four months.

The students had been taking part in a "Mott Walk" involving drinking excessive quantities of alcohol and after dark being deposited some kilometres from the university.

"Upon being dropped off they were required to surrender their clothes (other than shoes and socks) and also their mobile phones," the judge said.

"They then walk back to the university while naked while doing their best not be seen or detected."

Little and a female, who was not involved in the offending, had come upon the students and he demanded they get off the property.

"He produced what the victims describe and which on their evidence I am satisfied beyond reasonable doubt was a handgun or perhaps a replica handgun of some description," the judge said.

The judge found he detained four of the naked men for 35 minutes.

"During that detention the young men were obliged to be on their knees.

"There was a threat to kneecap them."

He struck each of them, in some cases a number of times, with a piece of wood causing injuries including lacerations to the back of the head.

"There was no planning and the events of the offending were spontaneous upon the offender seeing the naked victims," the judge said.

"Given the presence of the handgun (or replica) and the various threats the level of terror was considerable."

Little's criminal history included offences of assault, use carriage service to harass and drive in a manner dangerous in a police pursuit.

The judge cited a psychologist's report which said Little grew up in a household where he was exposed to domestic violence and substance abuse.

"His father was a violent man who was in and out of gaol and is currently serving a sentence at Goulburn "Supermax" for the murder of a prison officer," the report said.

"He has particularly vivid memories of being locked in a cupboard as punishment as a child."

Little said he had used methamphetamine and heroin on the day of March 23 and had perceived that the naked young men may have presented as a threat to his female companion.

"I note in this regard that there was not the slightest suggestion at the trial that they had been trespassing or that they presented any threat to that female," the judge said.

He accepted that on balance Little was remorseful and found there were some very positive signs so far as his long-term rehabilitation.