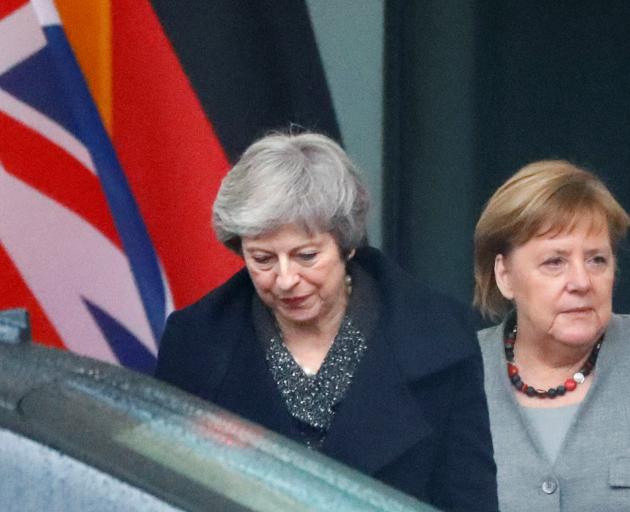 Theresa May (left) with Angela Merkel in Berlin. Photo: Reuters
An attempt to oust British Prime Minister Theresa May looked to be gathering momentum on Tuesday, a day after her decision to delay a vote in parliament on her Brexit deal for fear of a rout angered many in her Conservative Party.

With May on a tour of European capitals to try to secure "reassurances" to calm the crisis at home, the BBC and other media cited sources as saying the required number of letters calling for a no-confidence vote against her had been met.

There was little chance of getting confirmation of the leadership challenge - only one member of the Conservative Party knows how many lawmakers have submitted their letters - but her position looked more precarious than it has ever been.

Tricky exit? Theresa May appears to have trouble with her car door before #Brexit talks in Berlin [tap to expand] https://t.co/cLzjrOWFn4 pic.twitter.com/i4BgmPWZNb— BBC Politics (@BBCPolitics) December 11, 2018

Her removal - and it is not clear whether she would lose the vote of the whole party in parliament if the required number of letters had been received - could further complicate Brexit.

One aide described the situation as "ominous" after the BBC cited multiple sources as saying the required 48 letters to trigger the vote of no confidence in May's leadership had been reached.

The chairman of the Conservative Party's so-called 1922 committee, Graham Brady, has asked to see May on Wednesday after her weekly question session in parliament, the BBC's Political Editor Laura Kuenssberg wrote on Twitter.

May's move to postpone the vote on her deal to maintain close ties with the EU after leaving in March prompted an outcry by lawmakers on all sides of the debate - from hardline Brexit supporters to those who want to remain in the EU.

'I have never witnessed such an abject mess' - Labour leader Jeremy Corbyn slams the prime minister for "running away" from a vote over her Bexit deal in the Commons.Follow the latest on Brexit here: https://t.co/irdF5YmfFg pic.twitter.com/gPLY5fZbN2— Sky News (@SkyNews) December 11, 2018

Acknowledging that she faced "significant losses" if she had asked parliament to vote on the deal on Tuesday, May had told lawmakers she would seek ways to try to ease their concerns, particularly over the so-called Northern Irish backstop.

That took her on a tour of EU capitals on Tuesday. But the news was not good for those who want her to reopen the negotiations and do away with the backstop, an insurance policy that there will be no return to a hard border between Northern Ireland and EU member Ireland after Brexit. 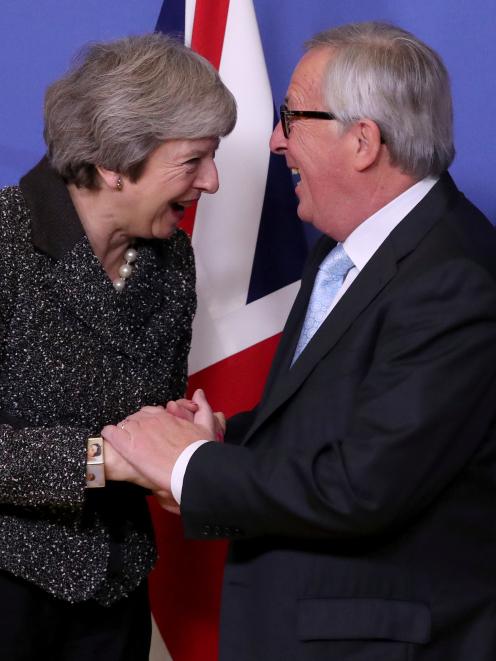 The message from the EU was clear: It can give legally-binding assurances about how it interprets the exit treaty, but will not countenance reopening the text itself.

Donald Tusk, who will chair an EU summit in Brussels on Thursday and Friday, tweeted after talking to May: "Clear that EU 27 wants to help. The question is how."

According to two sources, Merkel told her own German conservative parliamentary group there would be no more negotiations, but efforts were being made to give Britain reassurances.

May told Merkel that it was in nobody's interest for Britain to leave with no accord, the sources said.

European Commission head Jean-Claude Juncker said: "The deal we achieved is the best possible. It's the only deal possible. There is no room whatsoever for renegotiation ...

"But of course there is room enough to give further clarifications and further interpretations without opening the withdrawal agreement."

May's team has been pressing ahead with its work to try to get the vote through, with her ministers telling parliament that it will get its vote before January 21.

The pound, which has lost 25 cents against the U.S. dollar since the 2016 referendum, fell again amid the reports that May would face a leadership challenge.

The biggest obstacle to approval remains the Irish backstop.

May's critics say the backstop could leave Britain subject to EU rules indefinitely. The EU has said neither side wants the backstop to take effect, but it has to be part of the deal just in case.

With little hope of big changes from the EU, the options open to Britain range from a chaotic no-deal Brexit to risking the wrath of Brexit backers by calling the whole thing off.

Both May's Conservatives and the main opposition Labour Party have pledged to implement the result of the 2016 referendum, in which Britons voted narrowly to leave the EU.

But a rising number of backbench lawmakers, along with three of four living ex-premiers, say the only way out of the impasse may be a new referendum with an option to stay. The EU's top court ruled this week that Britain could abandon Brexit with no consequences up until the moment it finally leaves.

"It's clear we now need the most precious commodity of all: time. Time for serious and profound reflection by both parliament and people."