May presses on as lawmakers demand better deal 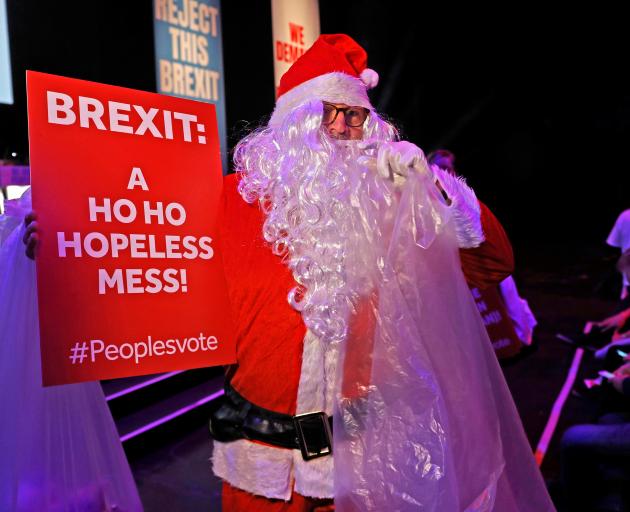 A pro-EU supporter at joint political rally by Best for Britain and the People's Vote campaign in London on Sunday. Photo: Reuters
Theresa May will push ahead with a crucial vote on her European Union exit deal, her Brexit minister said on Sunday, as senior lawmakers in her own party piled pressure on the British prime minister to go back to Brussels and seek a better offer.

May's deal, which would see Britain keep close economic ties with the EU, looks set to be rejected by parliament on Tuesday. That decision could throw plans for Britain's exit into turmoil and leave her own political future hanging in the balance.

The Sunday Times reported May was expected to say on Monday that she was delaying the vote to make a last-minute dash to Brussels to appeal to the EU to improve the deal. 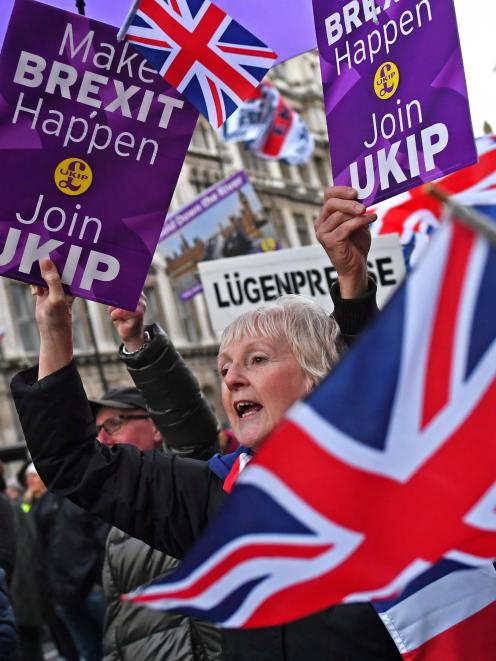 Pro-Brexit supporters also demonstrated in central London. Photo: Reuters
With the country deeply divided, thousands of protesters joined a pro-Brexit march in central London on Sunday to demonstrate against May's deal. To the east of the city the "People's Vote" group held a rally calling for a second referendum.

"The vote is on Tuesday, that is what we are focused on," Brexit minister Stephen Barclay told BBC TV on Sunday.

"The risk for those who say simply go back and ask again, the risk is that isn't necessarily a one way street, the French the Spanish and others will turn round, if we seek to reopen the negotiation, and ask for more," he added.

Barclay said Britain would enter "uncharted waters" if it loses the vote, but May could stay on as prime minister.

There has been speculation May might use an EU summit on December 13-14 to press for changes to the deal as Britain prepares to leave the EU at the end of next March.

While EU diplomats have said they could consider helping May with "cosmetic" changes to the non-binding political agreement that accompanies the deal, the legally binding text of the exit deal itself would be off limits to renegotiation.

European Council President Donald Tusk said on Sunday he had spoken to May by phone ahead of what he said was "an important week for the fate of Brexit".

The strongest opposition to May's deal centres around the so-called backstop, an insurance policy designed to prevent a hard border between EU member Ireland and British-ruled Northern Ireland.

EU supporters say Britain would become little more than a rule-taker, offering the worst of all worlds.

Several lawmakers, including DUP deputy leader Nigel Dodds, former Brexit minister Dominic Raab and former work and pensions minister Esther McVey, on Sunday called for May to go back to Brussels and seek to renegotiate the deal.

Former foreign secretary Boris Johnson, a leading Brexit campaigner, said lawmakers on all sides were united against the backstop and losing the vote in parliament would give May a mandate to ask the EU to remove it from the deal.

"Nothing is over until it is over," he told BBC TV.

"If the prime minister is able to go back to Brussels this week and say I'm afraid that the Irish backstop solution that you have come up with is very unpopular ... they will listen."

In the latest blow to her efforts to win parliament's backing, May's deal was condemned as "a huge step into the unknown" by a cross-party committee of lawmakers.

But in an interview in the Mail on Sunday, May said the choice was her deal or the risk of "grave uncertainty" for Britain and the chance of either no deal or no Brexit.

Ahead of the vote, the EU's top court will say on Monday whether Britain can unilaterally halt its exit from the EU, due to take place on March 29, 2019.

May said rejecting her deal would also risk the opposition Labour Party getting into power. Labour, who could seek to take control by calling a vote of no confidence in the government, said on Sunday they were ready to form a minority administration.

May also risks being ousted by her own lawmakers.

Leading pro-Brexit Conservative Jacob Rees-Mogg, who has previously called for a leadership contest, wrote in the Mail on Sunday that May should stand down, whether her deal is defeated in parliament's House of Commons or she seeks to delay the vote.

"The humiliation of avoiding a Commons vote is as much a reason for her departure as defeat in an actual vote," he said.

But Johnson, who is seen as a possible successor to May, said she could stay on and go back to the EU to renegotiate the deal if she loses the vote.