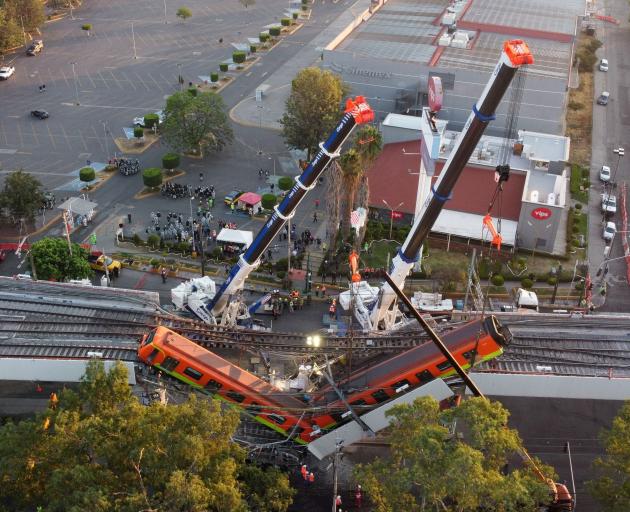 Mexico City's newest metro line collapsed on Tuesday, sending a train plunging onto a busy road below. Photo: Reuters
Mexico will punish those responsible for an overpass collapse that killed at least 24 people and injured dozens when a train on Mexico City's newest metro line plunged onto a busy road below, the government says.

Accompanied by officials involved in the construction and maintenance of the elevated metro line that collapsed, President Andres Manuel Lopez Obrador said the investigation should be done quickly and that nothing should be hidden from the public.

"There's no impunity for anyone," he told a news conference on Tuesday. The city has been governed since the turn of the century by former mayor Lopez Obrador and his allies.

Scores of people were killed and dozens more hospitalized in Mexico City overnight after a railway overpass collapsed and metro trains plunged onto a busy road, crushing cars under fallen carriages and rubble https://t.co/QDuA0fGnZM pic.twitter.com/cyr5Ho19VQ

The crash has raised wider questions about safety on one of the world's busiest metro systems, which carries millions of people daily across an urban sprawl home to over 20 million people.

Firefighters using heavy chains to stabilise the site pulled bodies and survivors from the wreckage before lowering one dangling carriage onto a truck in the afternoon. Some 79 people were injured, including three children, authorities said.

Video on social media showed the moment when the overpass suddenly plummeted onto a stream of cars near the Olivos station in the southeast of the city about 10.30pm on Monday (local time), sending up clouds of dust and sparks.

Monserrat (26) said she was at the back of the train wagon when she heard a loud noise and the lights went out.

"Everybody screamed and we fell on top of each other," she told Mexican radio, speaking from the Belisario Dominguez hospital where she was receiving treatment for an injured rib.

Outside hospitals, family members grew frustrated waiting for information on relatives, including some who were still missing.

Angelica Cruz Camino (31) said she had not heard from her husband since he was on his way home from work around 10:30 pm on Monday. She visited several hospitals and was told all victims were identified but she still had not located him by Tuesday afternoon.

"I called and called but he wasn't answering me. Then it was my son who realized the metro collapsed," she said outside Tlahuac public hospital. "I cannot find my husband."

It was the second serious accident this year, after a fire at a central control building knocked out service on several lines for weeks following budget cuts.

The overpass that collapsed was part of Linea 12, an addition to the network finished less than a decade ago and long plagued by allegations of corruption and structural weakness.

In 2014, just two years after it opened, several of the line's stations were closed for structural repairs.

Four people who live in the area told Reuters they observed the support structures below the elevated tracks visibly shaking when trains crossed. Some recalled warnings about the humid soil being unfit for major construction.

"Every time I saw the train, I saw the columns and beams shake," said Victor Lara, a daily commuter on the line. "They're not well made."

Investigations will be carried out by both the attorney general's office and an external auditor, the government said.

In 2020, two trains collided on another line of the network, killing one person and injuring dozens.

Lopez Obrador was mayor of the city in the early 2000s, and current mayor Claudia Sheinbaum and Foreign Minister Marcelo Ebrard, who ran the city when Linea 12 was built, are both senior members of his political movement.

After a powerful 2017 earthquake, government data show there were also damages to the line's support columns.

ICA shared a chart with Reuters indicating that CCICSA was responsible for construction on the section of the line that collapsed but declined to comment further.

A spokesman for CCICSA did not immediately respond to a request for comment on the chart, but said in an earlier statement to Reuters the company stood in solidarity with victims' families and those injured. "We are going to wait for the official expert opinion," CCICSA said.

Alstom said its involvement in the consortium was limited to certain aspects, including power supply and testing of some electromechanical work. The company said it would aid investigating authorities "in any way necessary."

Sheinbaum said it appeared a girder had given way on the overpass, which she said was inspected last year. At a later news conference, she said the collapse seemed to indicate a "structural failure."

"It is not possible to say categorically, but it seems this is what happened," Sheinbaum said.

Ebrard said it was the "most terrible" accident to have hit the local transport system, and that he was ready to cooperate with authorities in the investigation.

At the news conference with Lopez Obrador, Sheinbaum and Ebrard faced questions from reporters about who should be held accountable. Both urged the public to allow investigators to do their work before seeking to apportion responsibility.

The opposition Institutional Revolutionary Party said an investigation and punishment should be carried out "wherever it leads." 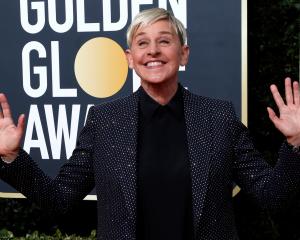 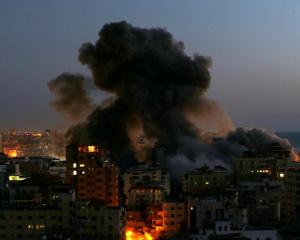