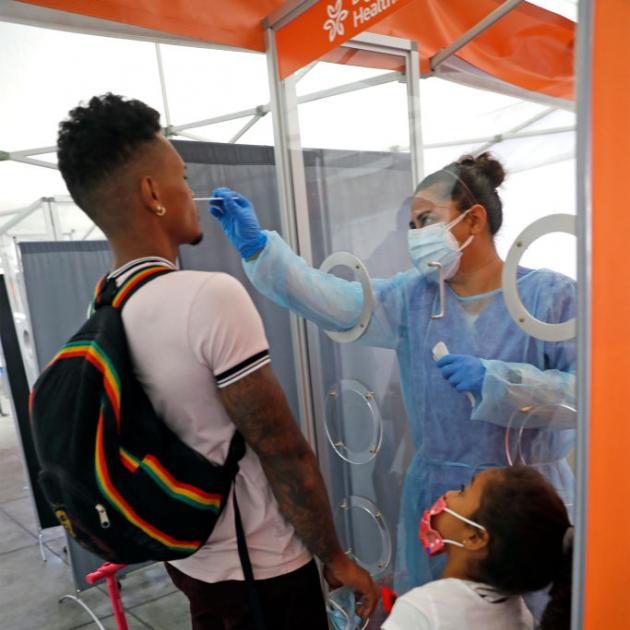 Before heading to Hawaii for Thanksgiving, Tommy Cooper has a Covid-19 rapid test administered by Shristi Aryal at San Francisco airport. Photo: Getty Images
Millions of Americans appear to be defying health warnings and traveling ahead of the Thanksgiving holiday, likely exacerbating a surge in Covid-19 infections before a series of promising new vaccines become widely available.

With US Covid-19 infections hitting a record 168,000 per day on average, Americans are flocking to airports against the advice of the Centers for Disease Control and Prevention (CDC), the US surgeon general and Dr Anthony Fauci, the nation's top infectious disease expert.

For Americans, the long holiday weekend, which begins on Thursday, is traditionally the busiest travel period of the year, and 2020 may prove to be no exception.

Some 1 million passengers passed through airport screenings on Sunday, the highest number since March. It was the second time in three days that passengers screened topped 1 million but screenings are down nearly 60% from the same time last year, the US Transportation Security Administration said.

Meanwhile, the seven-day average number of US Covid-19 deaths rose for a 12th straight day, reaching 1500 as of Monday, according to a Reuters tally of official data.

That has further taxed already exhausted medical professionals, as coronavirus hospitalizations have surged nearly 50% over the past two weeks and the United States has surpassed 255,000 deaths and 12 million infections since the pandemic began.

Pleading with residents to stay home and avoid gatherings during the holiday season, Governor Andrew Cuomo reminded New Yorkers of the grim early days of the pandemic when as many as 800 people died in a single day in the state.

Hospitalisations have spiked 122% in New York state over the last three weeks, Cuomo said, prompting the re-opening of an emergency medical facility on Staten Island.

Help could arrive soon. The head of the US campaign to rapidly deploy a vaccine said the first Americans could start receiving vaccinations as early as mid-December, and another global drug company on Monday unveiled promising trial results on a vaccine candidate.

'NOT LIVING IN FEAR'

Still, many Americans are refusing to follow the health advice that could save their lives.

In Pennsylvania, the number of Covid-19 tests coming back positive was 25% last week, according to data from The Covid Tracking Project. On Monday, Secretary of Health Dr Rachel Levine warned that the latest models indicated the state could start to run out of intensive care unit beds within a week.

Linda Lafferty, a nurse and the owner of a bed and breakfast in McConnellsburg, said family and friends gathered on the first Sunday in November to celebrate, as they do every year because she and others often have to work on Thanksgiving Day.

But Lafferty said her family would have assembled if they could.

"We are not living in fear and if we were able to get together on Thanksgiving Day we absolutely would," said Lafferty, 47. "We would still get together and we wouldn't limit the number of folks because if you are family you are family."

To be sure, many Americans said they would do their best to conform with health recommendations.

Donnalie Hope, a 78-year-old resident of Petersburg, West Virginia, is planning to make fresh cranberries, mash potatoes and her famous corn pudding for Thanksgiving, which she will spend with her daughter, who will be visiting, and a neighbour.

Hope said they would social distance as much as possible in her home, and that she planned to ready rubber gloves and hand sanitiser. She acknowledged that her guests might eventually take off their masks in the home.

"I'm trying very hard to comply with the regs because I want this country to get back to where it belongs," she said.

The White House plans to hold indoor holiday receptions in the coming weeks despite ongoing Covid-19 outbreaks and the advice of public health professionals.

While the White House has said President Donald Trump and his wife Melania will remain in Washington this week, skipping their annual Thanksgiving at Trump's private club in Florida, the first lady plans to hold a holiday reception a few days later on November 30, according to an invitation obtained by ABC News.

That follows a series of White House events in recent months that have been linked to a rash of outbreaks, including Trump's own bout with the disease from late September into early October. A White House aide and four others have tested positive in recent days.

Stephanie Grisham, a spokeswoman for the first lady, said the White House would provide the "safest environment possible" for the Christmas and Hanukkah celebrations with smaller guest lists than years past, masks "required and available," social distancing encouraged and hand sanitiser provided.

"Guests will enjoy food individually plated by chefs at plexiglass-protected food stations. All passed beverages will be covered," she said in a statement. "Attending the parties will be a very personal choice. It is a longstanding tradition for people to visit and enjoy the cheer and iconic decor of the annual White House Christmas celebrations."

Health professionals within the administration have advised against large indoor gatherings.

"We want everyone to understand that these holiday parties can be super spreader events," US Surgeon General Jerome Adams told ABC News in an interview on Monday, urging celebrations to be held outdoors with as few people as possible and pointing to recommendations by the US Centers for Disease Control and Prevention.