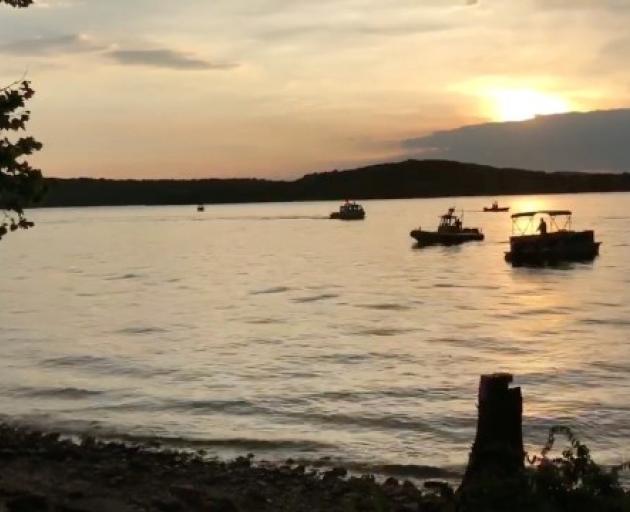 Divers on Friday (local time) recovered the last of the bodies from the wreckage of a "duck boat" that sank on Thursday during a storm on a Missouri lake, counting among the 17 who died nine members of a single family.

The World War Two-style amphibious vehicle was carrying 31 passengers including children when a microburst storm hit Table Rock Lake outside Branson, raising waves that battered the vessel and ultimately caused it to capsize.

More than three dozen people have died in incidents involving duck boats on land and water in the United States over the past two decades.

Eleven members of one family, nine of whom died, were among the passengers on the duck boat that sank on Thursday, according to Missouri Governor Mike Parson who called it a "heart-breaking tragedy".

"Emergency responders and civilian rescuers helped avert an even worse tragedy as people rushed to help in extremely dangerous conditions," Parson said in a statement. He said seven of the 14 survivors had been injured, one seriously.

On Thursday at around 7pm two duck boats were on the lake when thunderstorms rolled over it, churning the water. Both headed back to shore but only one made it. The driver of the other was among those killed, officials said.

"From what I understand there was life jackets in the duck," Rader said, but he declined to say if passengers were wearing them.

The National Transportation Safety Board and US Coast Guard were investigating, officials said.

The governor's spokeswoman Kelli Jones said the 17 victims were from six different US states.

Pat Cox, owner of a marina about a half mile from where the vessel went down, sent five boats and some 20 people to the rescue, most between the ages of 18 and 20.

"These people showed an amazing strength maybe that we don't always give them credit for," Cox said by telephone. "They had it and they took action. And they were good Samaritans."

The first boat's crew was able to pull two people from the waves, Cox said. "It was all hands on deck. We did everything we could."

Branson is a family-friendly tourist destination with attractions like "Dolly Parton's Stampede" dinner theater, the Amazing Acrobats of Shanghai and a Titanic museum with a model of the sunken vessel's front half.

Rick Kettles, owner of the Lakeside Resort General Store and Restaurant, said he had never before seen such conditions on the lake, which is a 174sqkm reservoir on the White River.

"I am 54 and I started coming here when I was 6 or 7 years old. I have been on my lake most of my life and I have never seen it like this," Kettles said. "I am trying to figure out why the boats were out there. I don't get it, having a captain's license myself."

A microburst is a severe, localised wind gust, blasting down from a thunderstorm, typically covering an area less than 4km in diameter and lasting less than five minutes.

The company that owned the duck boat, Ripley Entertainment, said it was working with families of the victims.

"Our number one priority is the families and our employees that were affected," spokeswoman Suzanne Smagala-Potts said on Thursday. The company did not reply to requests for comment on Friday.

Duck vehicles, modeled on landing craft that were used in the D-Day invasion of World War Two, are used on sightseeing tours around the world.

The company that builds ducks, Ride the Ducks International LLC, agreed in 2016 to pay a $1 million fine after one of the vehicles collided with a bus in Seattle, killing five international students.

Thirteen people died in 1999 when the duck boat in which they were riding sank near Hot Springs, Arkansas. Afterward, the National Transportation Safety Board warned that the boats' canopy roofs presented a hazard, making it difficult for people, even those wearing life jackets, to escape if one of the vessels capsized.

Two tourists died in Philadelphia in 2010 when the duck boat they were in was struck by a tugboat on the Delaware River.