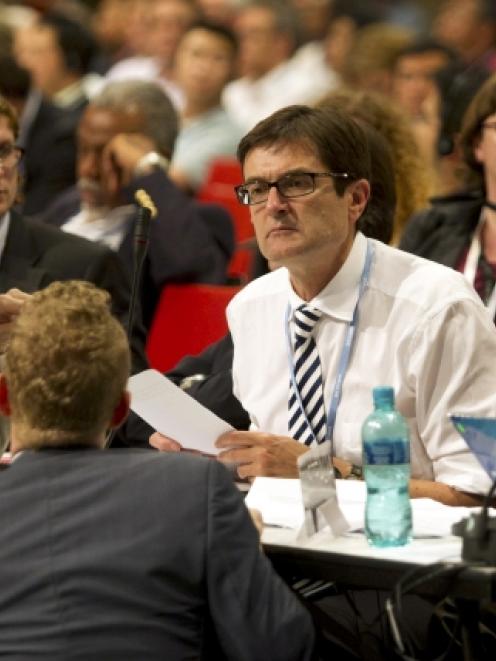 Australia's Minister for Climate Change Greg Combet speaks with other delegates during a break in plenary session at the United Nations Climate Change Conference in Durban. REUTERS/Rogan Ward (SOUTH AFRICA)
Climate negotiators have agreed a pact that would for the first time force all the biggest polluters to take action on greenhouse gas emissions, but critics said the action plan was not aggressive enough to slow the pace of global warming.

The package of accords extended the Kyoto Protocol, the only global pact that enforces carbon cuts, agreed the format of a fund to help poor countries tackle climate change and mapped out a path to a legally binding agreement on emissions reductions.

But many small island states and developing nations at risk of being swamped by rising sea levels and extreme weather said the deal marked the lowest common denominator possible and lacked the ambition needed to ensure their survival.

Agreement on the package, reached in the early hours of Sunday, avoided a collapse of the talks and spared the blushes of host South Africa, whose stewardship of the two weeks of often fractious negotiations came under fire from rich and poor nations.

"We came here with plan A, and we have concluded this meeting with plan A to save one planet for the future of our children and our grandchildren to come," said South African Foreign Minister Maite Nkoana-Mashabane, who chaired the talks.

"We have made history," she said, bringing the hammer down on Durban conference, the longest in two decades of UN climate negotiations.

Delegates agreed to start work next year on a new legally binding treaty to cut greenhouse gases to be decided by 2015 and to come into force by 2020.

The process for doing so, called the Durban Platform for Enhanced Action, would "develop a new protocol, another legal instrument or agreed outcome with legal force" that would be applicable under the U.N. climate convention.

That phrasing, agreed at a last-ditch huddle in the conference centre between the European Union, India, China and the United States, was used by all parties to claim victory.

"We've managed to bring the major emitters like the U.S., India and China into a roadmap which will secure an overarching global deal," he said.

US climate envoy Todd Stern said Washington was satisfied with the outcome: "We got the kind of symmetry that we had been focused on since the beginning of the Obama administration. This had all the elements that we were looking for."

Yet UN climate chief Christiana Figueres acknowledged the final wording on the legal form a future deal was ambiguous: "What that means has yet to be decided."

Environmentalists said governments wasted valuable time by focusing on a handful of specific words in the negotiating text, and failed to raise emissions cuts to a level high enough to reduce global warming.

Sunday's deal follows years of failed attempts to impose legally-binding, international cuts on emerging giants, such as China and India, as well as rich nations like the United States.

The developed world had already accepted formal targets under a first phase of the Kyoto Protocol, which runs out at the end of next year, although Washington never ratified its commitment.

Sunday's deal extends Kyoto until the end of 2017, ensuring there is no gap between commitment periods, but EU delegates said lawyers would have to reconcile those dates with existing EU legislation.

India's Environment Minister Jayanthi Natarajan, who gave an impassioned speech to the conference denouncing what she said was unfair pressure on Delhi to compromise, said her country had only reluctantly agreed to the accord.

"We've had very intense discussions. We were not happy with reopening the text but in the spirit of flexibility and accommodation shown by all, we have shown our flexibility... we agree to adopt it," she said.

Small island states in the frontline of climate change, said they had gone along with a deal but only because a collapse of the talks was of no help to their vulnerable nations.

"I would have wanted to get more, but at least we have something to work with. All is not lost yet," said Selwin Hart, chief negotiator on finance for the coalition of small states.

Tosi Mpanu-Mpanu, head of the Africa Group, added: "It's a middle ground, we meet mid-way. Of course we are not completely happy about the outcome, it lacks balance, but we believe it is starting to go into the right direction."

UN reports released in the last month warned delays on a global agreement to cut greenhouse gas emissions will make it harder to keep the average rise to within 2 degrees Celsius over the next century.

"It's certainly not the deal the planet needs - such a deal would have delivered much greater ambition on both emissions reductions and finance," said Alden Meyer of the Union of Concerned Scientists.

"Producing a new treaty by 2015 that is both ambitious and fair will take a mix tough bargaining and a more collaborative spirit than we saw in the Durban conference centre these past two weeks."