Myanmar accused of forcing survivors to toil for food 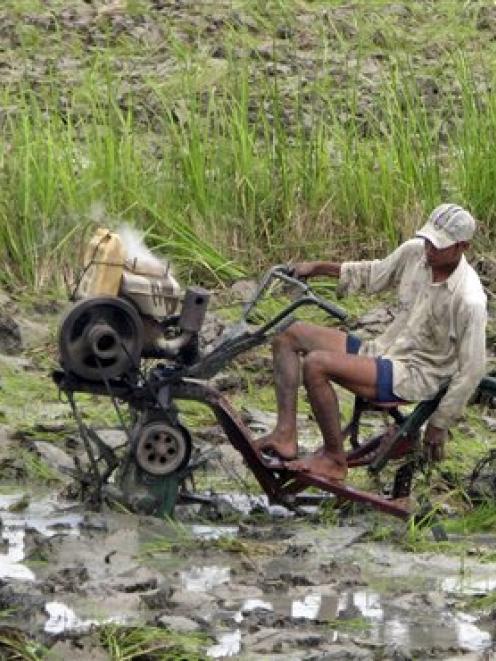 A farmer outside the village on Chaungtha beach in the Irrawaddy Delta region, Myanmar, ploughs a field with a home made machine. Photo by AP.
Myanmar's military regime has forced cyclone survivors to do menial labor in exchange for food and has stepped up a campaign to evict the homeless from aid shelters, an international human rights group says.

London-based Amnesty International also said authorities in several cyclone-hit areas continue to divert aid despite the junta's pledge to crack down on the problem weeks ago.

"Unless human rights safeguards are observed, tens of thousands of people remain at risk," Amnesty said in a report released on Thursday. "Respect for human rights must be at the centre of the relief effort."

More than a month after the storm, many people in stricken areas still have not received any aid and the military regime continues to impose constraints on international rescue efforts, human rights groups say.

US Navy ships laden with relief supplies steamed away from Myanmar's coast on Thursday, their helicopters barred by the ruling junta even though millions of cyclone survivors need food, shelter or medical care.

The USS Essex group, which includes four ships, 22 helicopters and 5,000 US military personnel, had been off the Myanmar coast for more than three weeks hoping for a green light to deliver aid to the survivors.

"The ruling military junta in Burma have done nothing to convince us that they intend to reverse their deliberate decision to deny much needed aid to the people of Burma," Lt. Denver Applehans said in an e-mail from the flotilla.

"Based on this, the decision was made to continue with previous operational commitments," Applehans said.

Adm. Timothy J. Keating, head of the US Pacific Command, said in a statement on Wednesday that the US had made "at least 15 attempts" to convince the generals to allow them to deliver aid directly to victims in affected areas.

Amnesty's report cites 40 accounts of Myanmar soldiers or local officials having confiscated, diverted or otherwise misused aid intended for cyclone survivors since the storm hit on May 2-3.

Although the junta has granted greater access to the hardest-hit Irrawaddy delta, "recent incidents of corruption and diversion of aid suggest a potentially serious threat to effective distribution of aid," the report said.

Most of the cases that were cited involved authorities confiscating aid from private donors or arresting them for refusing to hand the aid over.

A major UN agency on Monday, however, caught junta officials trying to divert their aid after the officials insisted on accompanying the UN workers who were delivering it, Amnesty spokesman Benjamin Zawacki told a news conference in Bangkok. He declined to give additional details.

The report also cites several cases of forced labour in exchange for food in the delta.

In mid-May, people near the hard-hit delta township of Bogale were forced to "break rocks and level a field" to construct a helicopter landing pad in exchange for biscuits sent by the UN's World Food Program, the report said.

Others in Bogale were given rice soup and shelter on condition that they cleared debris and built an official camp, the report said, adding that authorities told displaced survivors in nearby Labutta they would not receive food unless they worked.

Meanwhile, a campaign to kick homeless survivors out of temporary shelters in schools, monasteries and public buildings appears to have intensified.

"Movement has been increasingly widespread geographically," Zawacki said. "It violates the human rights of those people to food, to shelter, to health and, perhaps, the right to life."

The junta, which explicitly rejected the use of foreign military helicopters in the relief effort, still has not authorized the entry of nine civilian helicopters flying on behalf of the UN World Food Program, though they have been sitting in neighboring Thailand since last week.

Restrictions on visa and travel permission for foreign workers, as well as on entry of some equipment, continue to hamper the aid effort, despite a pledge made almost two weeks ago by junta leader Senior Gen. Than Shwe to UN Secretary Ban Ki-moon to allow foreign aid workers free access to devastated areas.

"The small number of visas and the short duration of travel permits for access" into the delta area "continue to impose serious constraints on the effectiveness of overall operations," the International Federation of Red Cross and Red Crescent Societies said.

Out of the 2.4 million people affected, only 1.3 million survivors have so far been reached with assistance by local and international humanitarian groups, the Red Cross and the UN, said the UN's Office for the Coordination of Humanitarian Affairs.