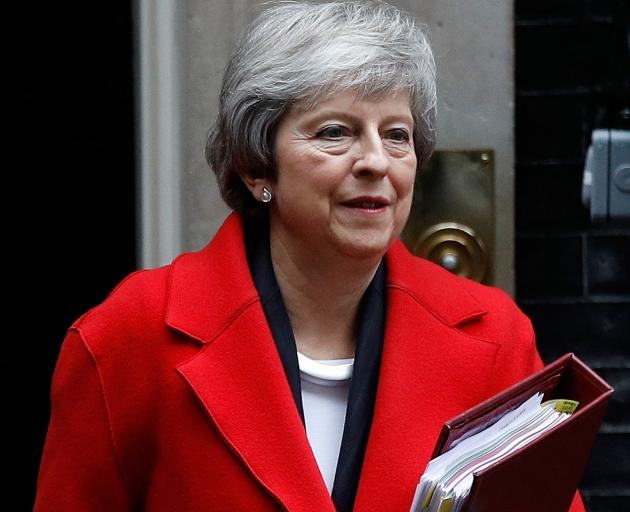 Theresa May is battling to get her Withdrawal Agreement with the EU through parliament in a vote next week that will define Britain's departure from the bloc and her future as a leader. Photo: Reuters
Three lawmakers loyal to Prime Minister Theresa May have proposed new Brexit safeguards to give parliament more say on the contentious issue of Northern Ireland in a bid to help her win a crucial vote to approve the government's exit deal.

May is battling to get her Withdrawal Agreement with the European Union through parliament in a vote on Tuesday that will define Britain's departure from the bloc and her future as a leader. Current forecasts suggest she will lose the vote.

The main vote is on a motion stating that lawmakers in the 650-seat House of Commons approve the Brexit deal. But lawmakers can also try to change the wording of the motion through a parliamentary device known as an amendment.

The latest amendment addresses the backstop, an element of the divorce deal that has angered lawmakers in May's party and her allies in Northern Ireland's Democratic Unionist Party.

It is intended to ensure there is no return to a hard border between British-ruled Northern Ireland and EU-member Ireland.

Critics say, however, it could leave Britain forced to accept EU regulations indefinitely, or it will treat Northern Ireland differently from the rest of the United Kingdom.

The BBC's political editor Laura Kuenssberg tweeted a photo of a signed amendment which would give parliament a vote on whether Britain should enter the backstop period, or whether an extension to the implementation period should be sought instead.

It adds that, should the backstop come into force, both sides would intend to agree a future relationship or alternative arrangement one year after the end of the implementation period.

That proposal would likely face opposition from European Union negotiators who have said the backstop is an insurance policy against a hard border, and cannot include a time limit.

Kuenssberg said government sources had suggested they would "come behind" this amendment. May's office did not immediately respond to a request for comment.

The amendment was proposed hours after May said she was looking at whether parliament could be given a greater role in deciding whether to trigger the backstop.

However, critics of May's deal within her party reacted with scepticism to the latest amendment, saying it did little new and would not be enough to win over lawmakers.

"Giving parliament the choice between the devil and the deep blue sea is desperate and will persuade very few," said pro-Brexit Conservative lawmaker Steve Baker.