Netanyahu 'moved' by US support 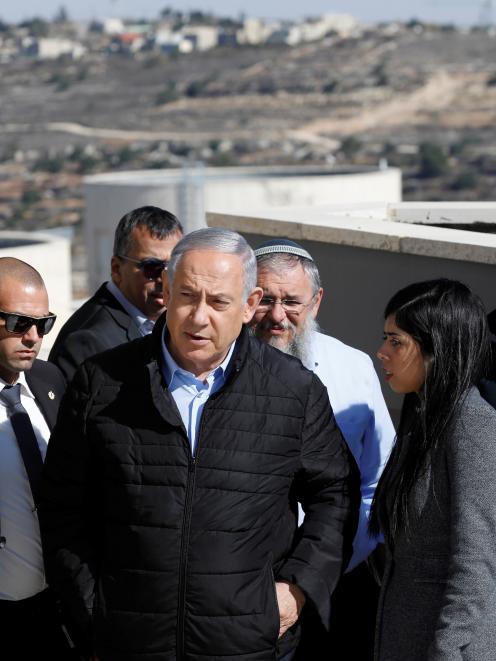 Israeli Prime Minister Benjamin Netanyahu (left) says the Trump administration has corrected "a historic injustice". Photo: Reuters
Israel's ruling right-wing government has moved swiftly to embrace US backing for Israeli settlements, even as Palestinians and Arab leaders said it was a threat to the international rule of law.

Monday's announcement by Secretary of State Mike Pompeo abandoned the position that settlements in Israeli-occupied territory were "inconsistent with international law", reversing a stand taken under President Jimmy Carter in 1978.

"I admit that I am very moved," Netanyahu said on Tuesday as he visited the Etzion bloc of settlements in the West Bank.

"The Trump administration has corrected a historic injustice. This is a very great day for the State of Israel and an achievement that will stand for generations."

In a video posted later on social media, Netanyahu said that the policy shift could pave the way for annexing the Jordan Valley in the West Bank which, during a September election campaign, the leader had pledged to annex.

However, some Israeli analysts said the announcement had little practical effect - with settlement building already in evidence under a Netanyahu government, as it had been since the area was captured from Jordan in the 1967 war.

The United Nations human rights office said the settlements remain in breach of international law, echoing a position taken by the International Court of Justice in an advisory opinion in 2004.

Netanyahu has cited historical and biblical links to the West Bank in supporting Jewish settlement.

Palestinians say settlements jeopardise their goal of a state in the West Bank and Gaza Strip, with East Jerusalem as its capital.

Although President Donald Trump told Netanyahu in early 2017 that he would "like to see you hold back on settlement for a little bit", the intervening period has seen repeated postponement of the White House's "Deal of the Century" peace plan.

Trump has also made a succession of pro-Israeli initiatives.

These include US recognition of Jerusalem as Israel's capital in 2017, moving the US embassy to the city in 2018 and cuts in US aid to Palestinians. In March, Trump recognised Israel's annexation of the Golan Heights, captured from Syria in 1967.

Hagit Ofran, Settlements Watch Director of the left-wing Israeli group Peace Now, said there were 430,000 settlers in the West Bank and 200,000 in East Jerusalem, living in 132 settlements and 121 unofficial settlement outposts. About 3 million Palestinians live throughout the West Bank.

"If you want to know what the Deal of the Century plan was, we know what it is now," said Ofran. "It is to say to the Palestinians 'you are not going to get any of your basic demands and rights'."

The speed and consistency of the response by Palestinian officials suggested they are familiar with headline-grabbing Trump moves and have decided to frame them in a wider context.

"The bias of the Trump administration towards the most extreme in Israel blinds it from seeing the basic principles of international law and consensus," said Palestinian Prime Minister Mohammad Shtayyeh on Twitter.

Palestinian Ambassador to the United Nations Riyad Mansour said he was consulting nations at the Security Council to "lobby a unified international position to confront the American illegal announcement regarding settlements".

Diana Buttu, a former legal adviser to the Palestine Liberation Organization, said that each US administration since Reagan had "pandered to Israel on settlements."

"I get the sense from the Palestinian leadership's responses that they believe this issue has to be framed as not just about 'us' but about the world order that people believe in ... when you go down this path it isn't just about Palestine, this affects Crimea and other places around the world."

FACTS ON THE GROUND

David Friedman, the Trump-appointed US Ambassador to Israel, said on Twitter that Pompeo's announcement would "advance the cause of peace" by creating a "level playing field" for future talks.

To many Israeli settlers, the move simply recognised the status of settlements they regard as permanent.

"From the sea to the Jordan River, it belongs to the people of Israel," said settler Zomi Osi in the West Bank.

But yards away, retired villager Mahmoud Salem said nothing could change the fact that the land was Palestinian.

"He (Trump) doesn't own it, he has no right to give it to anybody and he can't force its owners to leave it," he said.

In Gaza, where Israeli withdrew soldiers and settlers in 2005, Palestinian student Fatima Attallaa stood outside a building that was once part of the Israeli settlement Neve Dekalim, saying she looked forward to the day when the West Bank was also free of settlers.

"The American decision is void," she said. "Settlements will be removed. We are at a university that was once a settlement and today it is Al-Aqsa University."

Egyptian state news agency MENA quoted him as saying it would "push the legions of Israeli settlers to practise more violence and brutality against the Palestinian population."