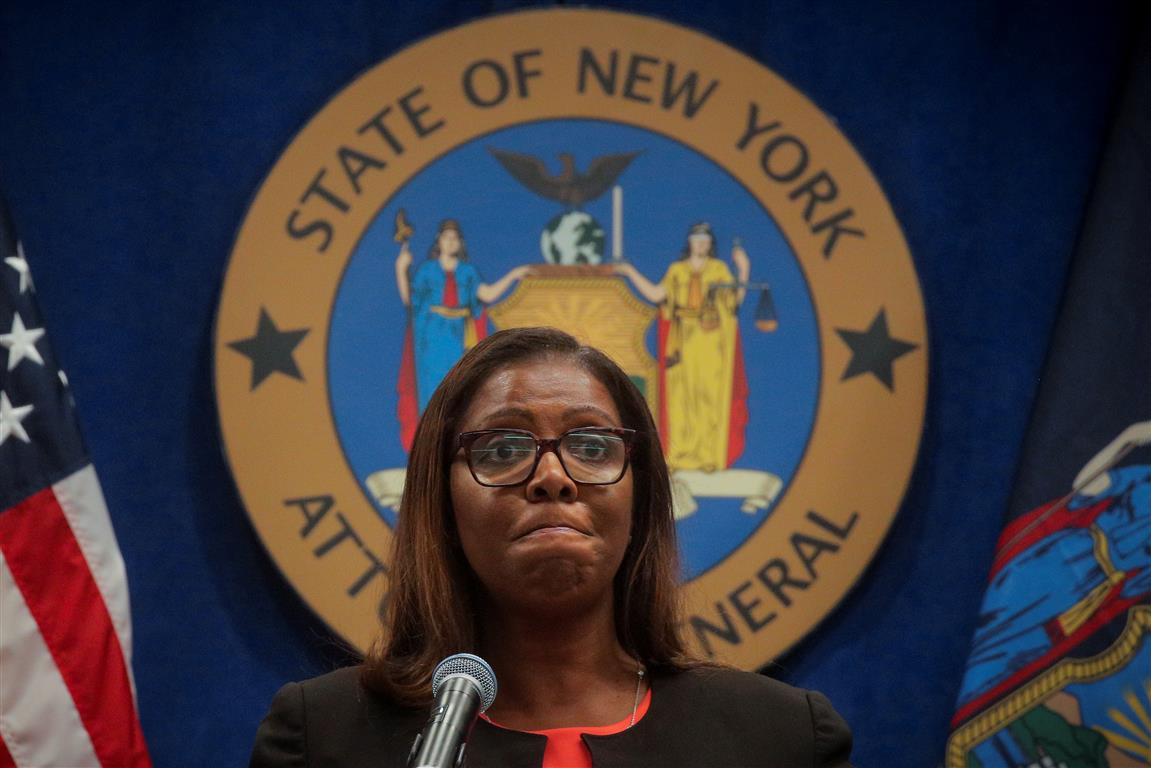 New York State Attorney General Letitia James speaks during a news conference to announce a suit to dissolve the National Rifle Association. Photo: Reuters
New York state's attorney general has sued to dissolve the National Rifle Association, alleging senior leaders of the non-profit group diverted millions of dollars for personal use and to buy the silence and loyalty of former employees.

The lawsuit filed in a Manhattan court by Attorney General Letitia James alleges NRA leaders paid for family trips to the Bahamas, private jets and expensive meals that contributed to a $US64 million reduction in the NRA's balance sheet in three years, turning a surplus into a deficit.

The NRA responded by suing James in federal court, saying she had violated the NRA's right to free speech and seeking to block her investigation.

James alleged in a statement that NRA leaders "used millions upon millions from NRA reserves for personal use," failing to comply with the NRA's own internal policies in addition to state and federal law.

She told reporters the NRA "has operated as a breeding ground for greed, abuse and brazen illegality," adding that "no one is above the law."

The lawsuit names the NRA and four leaders including Wayne LaPierre, the executive vice-president who has been atop the leadership for nearly three decades.

The confrontation pits James, a Democrat, against the largest and most powerful gun organisation in the United States, one closely aligned with President Donald Trump's Republican Party.

Just like Radical Left New York is trying to destroy the NRA, if Biden becomes President your GREAT SECOND AMENDMENT doesn’t have a chance. Your guns will be taken away, immediately and without notice. No police, no guns!

The actions are certain to further polarise a country where the NRA is revered by conservatives as a champion of the US Constitution and its Second Amendment right to keep and bear arms while at the same time it is vilified by liberals as an enabler of rampant gun violence.

Trump sought to make it an issue for his re-election on November 3 against Democratic challenger Joe Biden.

"Just like Radical Left New York is trying to destroy the NRA, if Biden becomes President your GREAT SECOND AMENDMENT doesn't have a chance," Trump said on Twitter. "Your guns will be taken away, immediately and without notice. No police, no guns!"

Biden has not called for confiscating guns. He has said he would seek to ban assault weapons and high-capacity ammunition magazines, let people who own assault weapons sell them back voluntarily, and expand background checks.

The NRA branded the lawsuit a "baseless, premeditated attack" and a "power grab" tied to the campaign.

"We not only will not shrink from this fight – we will confront it and prevail," NRA President Carolyn Meadows said in a statement.

Apparently expecting James' suit, the NRA fought back with the suit of its own in the Northern District of New York, saying James had been targeting the NRA politically ever since she ran for attorney general in 2018, vowing to take on the NRA which she called a "criminal enterprise."

The NRA is subject to New York law because it is registered there as a non-profit. Its physical headquarters are in Fairfax, Virginia, near Washington, D.C.

James' suit coincided with another one filed against the NRA and its foundation by the attorney general for Washington, D.C., in the district's Superior Court, alleging the misuse of charitable funds and wasteful spending.

Briefing reporters, James denied the New York suit was motivated by the NRA's support for Trump. Her written statement said the NRA's power had gone unchecked for decades, "which is why, today, we seek to dissolve the NRA."

"We have been warning regulators and the public about this corruption for years," Everytown said on Twitter.

Moms Demand Action sarcastically offered that "our thoughts and prayers are with Wayne LaPierre and his cronies at the NRA," mocking the common refrain used following mass shootings.