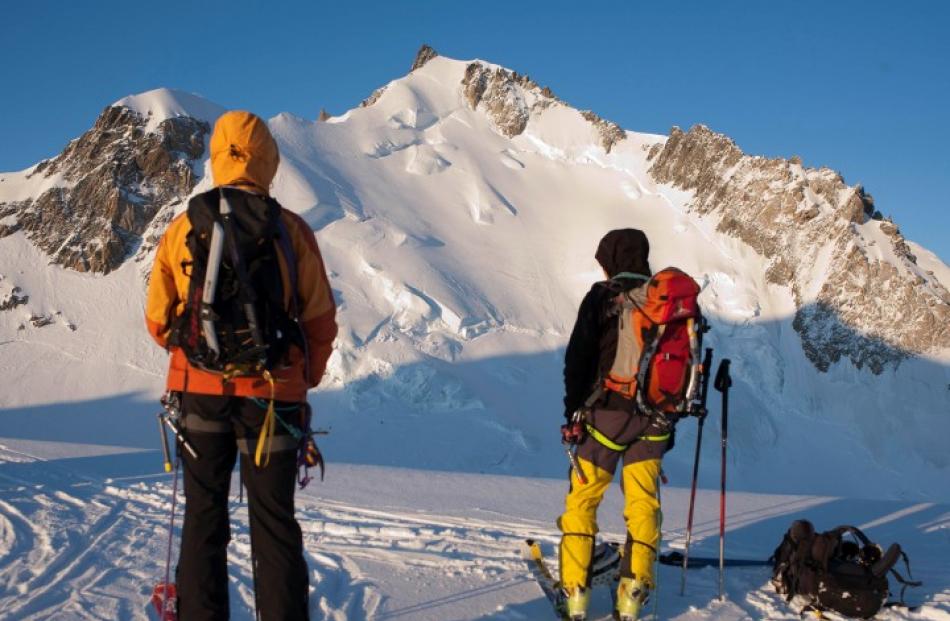 Climbers look at Mont Maudit in the French Alps, where nine people have been killed in an avalanche. REUTERS/Emmanuel Foudrot/Files

Nine climbers were killed in an avalanche near Chamonix in the French Alps when a wall of snow swept them away as they tried to scale one of Europe's tallest peaks, authorities said.

Two Britons and two Germans reported missing after the avalanche had been accounted for by the end of the day, when search efforts were called off until Friday (local time).

French Interior Minister Manuel Valls said an investigation would be launched to establish what had happened and how similar avalanches could be avoided.

A preliminary investigation suggested a climber may have stepped on an icy patch, unwittingly triggering the giant slide. Many of the climbers were roped together for safety reasons, and some of the injured sustained broken bones.

"The conditions are still perilous. At this stage, the mountain is not safe," Valls told reporters, adding that he had flown over the area and seen giant blocks of ice beneath him.

"Unfortunately, it's always in July and August that we get such events, but we will investigate and see if there is anything we can do."

Twelve people were injured, one of whom, a Swiss national, was in a critical condition and had been taken to hospital across the Swiss border in Sion. Six of the injured had been released from hospital by Thursday evening.

The most deadly avalanche in the Alps since 2008 swept down a popular climbing route in the Mont Blanc range near the border with Switzerland at about 0300 GMT. The scene of the tragedy - "le Mont Maudit" which translates as "Cursed Peak" - is one of two popular access routes to the famous Mont Blanc peak.

About 38 climbers were on the mountain - at an elevation of 4,000 metres (13,000 feet) - when the avalanche hit without warning in fine weather conditions, the head of the Haute-Savoie rescue squad, Bertrand Francois, told a news conference.

That included 28 climbers in two separate climbing teams, as well as solitary climbers, he said, adding that some of the climbers had managed to turn and flee.

Authorities had not expected any avalanches, as conditions were good on Thursday morning, said Jean-Louis Verdier, mayor of the resort town of Chamonix.

"We had no more reason than usual to be alarmed," Verdier told Reuters TV. "It's a steep mountain face. There are big plates of snow we know of where an avalanche can easily occur. But this morning we had no reason to expect an avalanche of this size and such a tragedy."

One of the climbers who managed to escape alerted the authorities.

Rescue workers in helicopters and on foot, as well as dog teams, had searched for the missing, but their efforts were hampered by the risk of a fresh avalanche as well as by high winds.

The search will continue on Friday, authorities said, to look for any climbers who may have set off on the mountain on their own.

Victims' families were being received at a chapel of rest set up at the hospital in Chamonix.

Eight Swiss, German and Austrian climbers perished in a similar avalanche nearby in 2008.