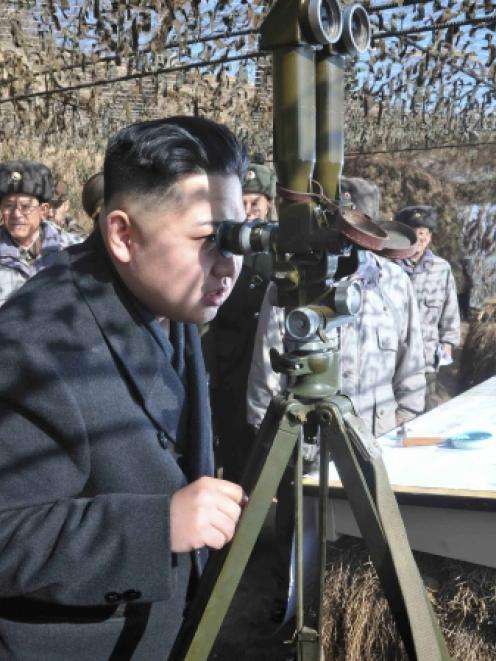 North Korean leader Kim Jong-Un visits a unit under the command of the Korean People's Army 4th Corps stationed in the southwestern sector of North Korea. REUTERS/KCNA
North Korea has agreed to stop nuclear tests, uranium enrichment and long-range missile launches, and to allow checks by nuclear inspectors, in an apparent policy shift that paves the way for resuming long-stalled disarmament talks.

The surprise breakthrough, announced simultaneously by the US State Department and North Korea's official news agency, makes possible the resumption of six-nation nuclear negotiations with Pyongyang. It followed talks between US and North Korean diplomats in Beijing last week.

While analysts cautioned that Pyongyang has backtracked repeatedly on past deals, the moves by North Korea mark a sharp change in course, at least outwardly, by North Korea's reclusive leadership following the death in December of veteran leader Kim Jong-il.

The State Department said that in return, the United States was ready to go ahead with a proposed 240,000 metric-tonne food aid package requested by North Korea and that more aid could be agreed to based on continued need.

Along with halting weapons activities, North Korea said it would allow nuclear inspectors from the U.N.'s International Atomic Energy Agency to visit its Yongbyon nuclear complex to verify the moratorium on uranium enrichment has been enforced.

"The DPRK, upon request by the US and with a view to maintaining positive atmosphere for the DPRK-US high-level talks, agreed to a moratorium on nuclear tests, long-range missile launches, and uranium enrichment activity at Yongbyon and allow the IAEA to monitor the moratorium on uranium enrichment while productive dialogues continue," North Korea's official KCNA news agency said.

North Korea is known formally as the Democratic People's Republic of Korea (DPRK).

"Today's announcement represents a modest first step in the right direction," Secretary of State Hillary Clinton told a Congressional panel, noting that Washington continued to have profound concerns over a range of North Korean activities.

The IAEA, which withdrew its inspectors from North Korea in 2009, said it was ready to return, calling the moratorium deal "an important step forward."

South Korea and Japan both welcomed the announcement, with the Foreign Ministry in Seoul saying it could form the basis for a broader agreement on North Korea's nuclear program.

"It is our assessment that the basis has been set for moving forward on our efforts to resolve the North Korean nuclear issue in a comprehensive and fundamental manner," Foreign Ministry spokesman Cho Buyung-jae said in a statement. .

As part of the deal, Washington reaffirmed that it did not have hostile intentions toward North Korea and was prepared to take steps to improve bilateral ties and increase people-to-people exchanges.

The US decision to resume food aid was a gesture toward Pyongyang, which has sought international help to cope with chronic food shortages.

The United States halted food aid to North Korea in 2009 amid a dispute over transparency and monitoring, compounding problems that have followed a crippling famine in the 1990s that killed an estimated one million people

The surprise announcement was a step forward for Washington's campaign to rein in renegade nuclear programs around the world and comes as the Obama administration steps up pressure on Iran over its nuclear ambitions, which western governments fear are aimed at producing nuclear weapons.

Analysts called the deal an important preliminary step and said the return of IAEA inspectors would give the international community an important window into North Korea's nuclear work.

"This puts an element of control back on the North Koreans' nuclear development program as well as their existing capabilities that we have not had for almost four years," said Jack Pritchard, a former US negotiator with North Korea who heads the Korea Economic Institute.

But Pritchard said he believed it was unlikely that Pyongyang's young and untested new leader Kim Jong-un was ready to comply with demands that he scrap the entire nuclear program.

"How does a 28-year-old give up the only legitimate piece of leverage that he has in dealing with the superpowers to preserve the survivability of his regime? He's not going to do that," Pritchard said.

The announcement followed talks between the United States and with North Korea last week in Beijing, the first such meeting since Kim Jong-un succeeded his father as leader of the communist state two months ago.

Bruce Klingner, a Korea analyst at the Heritage Foundation, said the move did not necessarily represent any fundamental changes in Pyongyang, noting that the deal tracked a draft agreement that US diplomats were nearing at the time of Kim Jong-il's death.

"This is the first step in a very long road," he said, saying it may simply provide the framework for additional meetings between the United States and North Korea to haggle over an agenda for any broader nuclear talks.

North Korea agreed to curtail its nuclear activities under a an aid-for-denuclearization agreement reached in September 2005 by six-party talks bringing together North and South Korea, China, Japan, Russia and the United States.

Under the agreement, the North agreed to abandon its nuclear programs in exchange for economic and diplomatic incentives to be provided by the other parties involved in the negotiations.

But the embryonic deal was never fully implemented.

Instead, the North held two nuclear test blasts -- in 2006 and 2009 -- and later disclosed a uranium enrichment program, giving it a second path to obtaining fissile material for bombs, in addition to its long-standing program of producing plutonium.

The United States, South Korea and their allies had been sceptical of North Korea's assertions that it stands ready to return to the six-party talks, and said they would insist on demonstrable evidence of Pyongyang's willingness to denuclearize before any such talks could resume.

Victor Cha, a Korea expert at the Center for Strategic and International Studies, said it could be some time before the IAEA inspectors are back in the ground in North Korea.

"I think it is going to be a tortuous process of synchronizing the shipment of the food aid with the arrival of the IAEA inspectors," Cha said.

"That's the way the North Koreans like to do things, and it could get drawn out for a very long time."