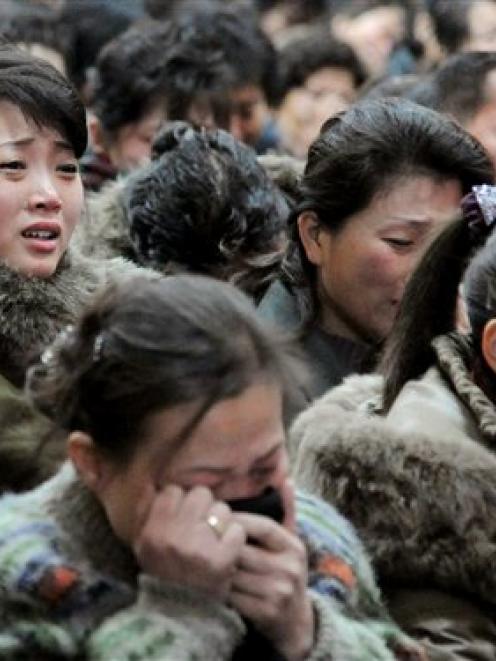 Clinton spoke after meeting visiting Japanese Foreign Minister Koichiro Gemba, who said Washington, Tokyo and Seoul all agreed on the need to maintain stability and repeated a call on Pyongyang to take "concrete action" to show it is interested in denuclearization.

"We both share a common interest in a peaceful and stable transition in North Korea," Clinton said.

"We reiterate our hope for improved relations with the people of North Korea and remain deeply concerned about their well-being," she said.

Clinton said Washington had "reached out" to both Beijing and Moscow following Kim's death on Monday as part of its effort to coordinate with partners in the six-party talks, which have been frozen since 2008.

Gemba said he and Clinton agreed it was important not to let Kim's death "negatively affect" the peace and stability of the Korean peninsula and on the need to closely monitor the situation.

"We share the view that we should coordinate closely with six party partners. We are also in agreement that all sides want stability and calmness during this period," Gemba said.

"In addition, we also confirmed that we should maintain our close coordination among Japan, the United States and the Republic of Korea on the efforts toward denuclearization of North Korea, in particular to ensure concrete actions taken by North Korea," he said.

Clinton was due to be briefed on Monday by the Obama administration's special envoy on North Korea, Glyn Davies, following his recent trip to Seoul, Tokyo and Beijing to discuss prospects for resuming the nuclear negotiations.

The six-way talks involving the two Koreas, the United States, China, Japan and Russia broke down in 2008, and United Nations inspectors were expelled from North Korea in 2009.

Despite repeated efforts, there has been little sign of progress since then.

U.S and North Korean official have met twice in recent months regarding an eventual return to talks on ending Pyongyang's atomic programs.

The meetings, despite no immediate breakthrough, marked the end of a period of acute tensions last year when Seoul accused Pyongyang of sinking one of its ships and shelling one of its islands.