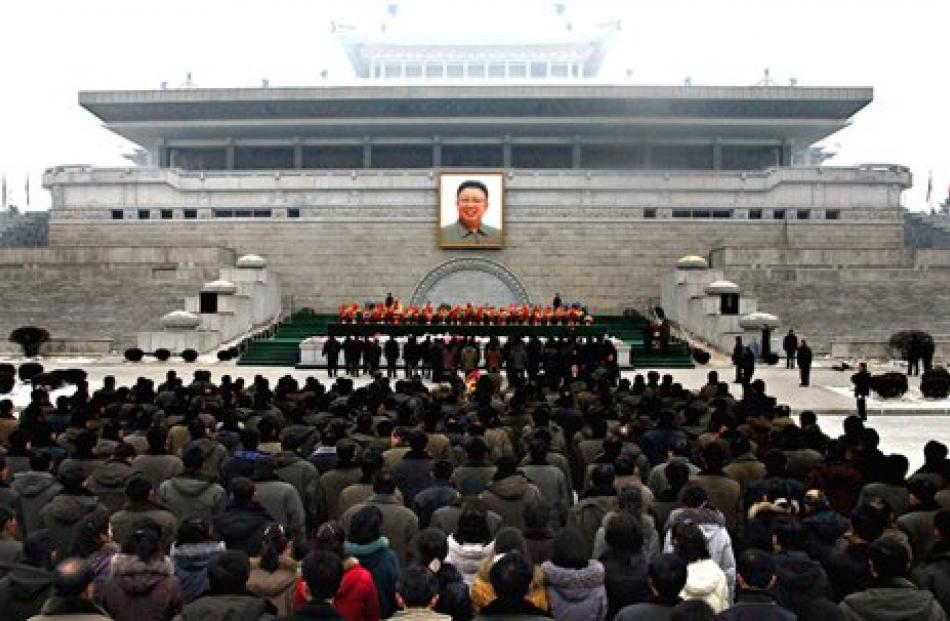 North Korea has vowed to make an all-out drive for prosperity as it unites behind new leader Kim Jong Un, ushering in 2012 with promises to resolve food shortages, bolster its military and defend Kim Jong Il's young son "unto death."

The pledge in North Korea's annual New Year's message comes as the country enters a new era, with Kim Jong Un installed as supreme commander of the 1.2 million-strong military and as ruling party leader following his father's December 17 death.

On the streets of Pyongyang, the mood was more sombre than in past New Year's celebrations, as people gathered in large crowds to pay tribute to Kim Jong Il, who ruled the country for 17 years.

This New Year's message didn't include the North's routine harsh criticism of the United States and avoided the country's nuclear ambitions, a suggestion that Pyongyang may be willing to continue talks with Washington to win food aid.

This year is a crucial one for North Korea as it tries to build a "great, prosperous and powerful nation" befitting the April 2012 centenary of the birth of national founder Kim Il Sung, the new leader's grandfather.

"Glorify this year 2012 as a year of proud victory, a year when an era of prosperity is unfolding," said the New Year's message, carried by the official Korean Central News Agency. "The whole party, the entire army and all the people should possess a firm conviction that they will become human bulwarks and human shields in defending Kim Jong Un unto death."

In Pyongyang, the day was cold, snowy and gray, with splashes of bright color provided by flags, lanterns and banners reading "Happy New Year" that decorated the streets. The celebration, however, coming just days after the official mourning period for Kim Jong Il ended, was muted, unlike past years when cheerful people in their best holiday clothes thronged the streets.

From early morning, streams of people, their expressions solemn, bowed and laid bouquets and wreaths at monuments to Kim Jong Il and Kim Il Sung. Families trudged through the snow, carrying potted flowers and plants, to put their offerings beneath large portraits of a broadly smiling Kim Jong Il.

Workers at covered flower stands handed out yellow and red flowers to large crowds. Some slogans around the city repeated the official New Year's message, calling on citizens to glorify the coming year. Newly released posters urged people to "turn sorrow into strength and courage," a sentiment often heard from North Koreans since Kim's death.

"We lost the great Kim Jong Il because we did not do our work well. How can we have a rest?" Vice Minister of Mining Industry Pak Thae Gu told The Associated Press.

Kim Jong Un spent part of the day visiting a tank division, state media said, in what was apparently his first reported military field inspection since his father's death. Kim Jong Il regularly visited military units, factories and farms across the country, and his son's trip provides further evidence of the North's intention to link him closely with the military.

The New Year's message said North Korea would boost its military and boasted that the country is "at the epochal point of opening the gates of a thriving country," with parts of Pyongyang "turned into socialist fairylands."

Still, the message acknowledged the country's food crisis, saying "the food problem is a burning issue." North Korea had been in talks with the United States on food aid, but they stopped because of Kim Jong Il's death.

The United Nations has said a quarter of North Korea's 24 million people need outside food aid and that malnutrition is surging, especially among children.

The message, a joint editorial appearing in the Rodong Sinmun, Joson Inmingun and Chongnyon Jonwi newspapers, said North Korea must build on foundations laid last year and turn itself "into an economic giant."

"This year's message shows North Korea will focus on its economy and ideological solidarity to establish stability" for Kim Jong Un's leadership, said Yoo Ho-yeol, a professor at Korea University in South Korea.

"There is also no specific mention of the United States or the nuclear program, and that shows North Korea is leaving room for the chance of improved ties with the United States," Yoo said.

North Korea in recent days has cemented Kim Jong Un's position as its new leader and on Saturday officially named him supreme commander of the military.

The New Year's message linked Kim Jong Un to the "songun," or military-first, policy of Kim Jong Il, and called him "the eternal center" of the country's unity.

The message spoke of a desire for reunification with South Korea - a point North Korea often mentions - but did not give specifics. The North warned Friday that there would be no softening of its position toward South Korea's government after Kim Jong Il's death.

North Korea, which has tested two atomic devices since 2006, has said it wants to return to long-stalled talks on halting its nuclear weapons program in return for aid. Washington and Seoul, however, have insisted that the North show progress on past disarmament commitments before negotiations can resume.

The Korean peninsula remains technically in a state of conflict because the 1950-53 Korean War ended in a truce, not a peace treaty.

Kim Jong Un also received a boost from China, his country's biggest backer, as President Hu Jintao sent congratulations to Kim on his appointment as head of the military.