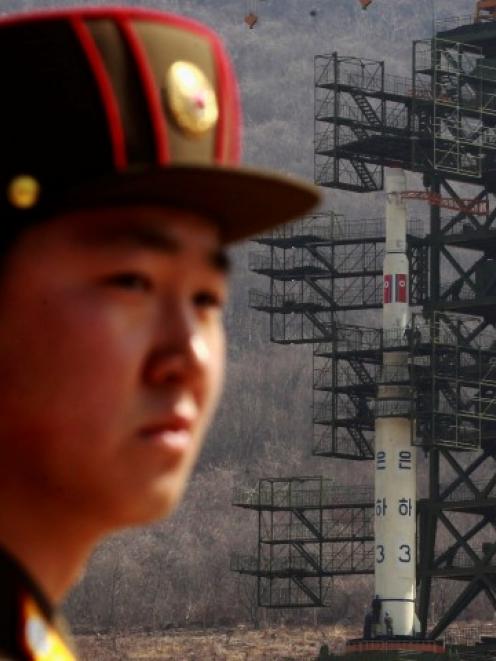 A soldier stands guard in front of the Unha-3 rocket at a launch pad at the West Sea Satellite Launch Site northwest of Pyongyang, North Korea. The North has reportedly launched the rocket today. REUTERS/Bobby Yip
New Zealand has joined other countries in condemning North Korea's long-range rocket launch today.

The Unha-3 (Galaxy-3) rocket was reportedly launched at 7.39pm local time (10.39am NZT), and is being seen by western countries as a ballistic missile test, which are banned by United Nations resolutions.

"It is a major disappointment following their recent agreement with the United States to put a moratorium on long-range missile launches.''

The much-hyped long-range rocket apparently crashed into the sea a few minutes after launch, South Korean and other officials said, dealing a blow to the prestige of the reclusive and impoverished state.

Pyongyang had defied international pressure from the United States and others to push ahead with the launch, which even its close ally China had warned against.

According to Japanese broadcaster NHK, citing a defence ministry source in Tokyo, the rocket flew for 120 km and then broke up into four pieces, crashing into waters off the west coast of the Korean peninsula.

South Korea's army said debris had crashed into the sea some 200km off the western coast of South Korea.

North Korea said it wanted the Unha-3 rocket to put a weather satellite into orbit, although critics believed it was designed to enhance the capacity of North Korea to design a ballistic missile deliver a nuclear warhead capable of hitting the continental United States.

Officials from Japan confirmed the mission had failed, while ABC News cited U.S. officials saying it had failed, although there was no immmediate indication of where it fell.

The rocket's flight was set to take it over a sea separating the Korean peninsula, with an eventual launch of a third stage of the rocket in seas near the Philippines that would have put the satellite into orbit.

This will be North Korea's second consecutive failure to get a satellite into orbit, although it claimed success with a 2009 launch. There was no immediate comment on Friday's launch from North Korea's official media.

The Unha-3 rocket took off from a new launch site on the west coast of North Korea, near the Chinese border.

The launch had been timed to coincide with the 100th birthday celebrations of the isolated and impoverished state's founder, Kim Il-sung, and came after a food aid deal with the United States had hinted at an easing of tensions on the world's most militarised border.