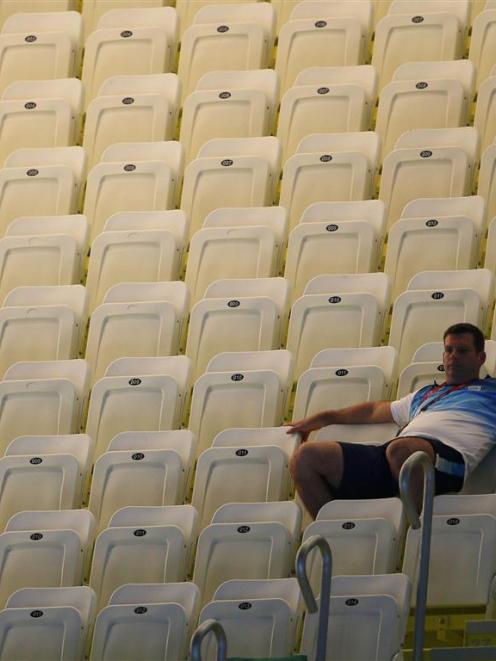 On a school holiday and after months of public complaints over the inability of thousands in Britain to buy tickets, Culture Secretary Jeremy Hunt, the minister responsible for the Olympics, said he was disappointed by the empty seats and that the London Organising Committee of the Olympic Games (LOCOG) were looking into it.

Television coverage of events on Saturday showed and visitors to venues found scores of empty seats in the early part of the day at the aquatics centre, in the basketball arena and later on at Wimbledon for the tennis. There was also plenty of space to stretch out in the Olympic Park.

"We think it was accredited seats that belong to sponsors, but if they are not going to turn up, we want those tickets to be available for members of the public, because that creates the best atmosphere. So we are looking at this very urgently at the moment," Hunt said.

Sports Minister Hugh Robertson said he was surprised that the events were not full.

LOCOG became used to putting up the "sold out" sign within minutes of each tranche of tickets going on sale to the public.

On Saturday some ticket box offices at venues in the park still had queues of people seeking to buy tickets for selected sports.

"I've been trying and trying every day to get (soccer) tickets for Argentina," 34-year-old Argentinian electrician Lucas Lopez told Reuters on a stroll through the park.

Nicolette Robinson, 47, a branding and design consultant, wanted to be a gymnast when she was growing up just like her hero Nadia Comenici and was very disappointed that she could not get tickets for the event at the London Games.

"I thought the least I could do was go and see them (the gymansts) and I'm watching them on television and the place is half empty and that's a shame. I would have paid whatever it takes to see them," she said.

LOCOG said in a statement late on Saturday: "Where there are empty seats, we will look at who should have been sitting in the seats, and why they did not attend. Early indications are that the empty seats are in accredited seating areas, but this is day one, and our end of day review will provide a fuller picture,"

LOCOG declined to provide a figure for the number of people in the park on Saturday or how many tickets had been sold but said that 11 million people would attend the Games.

"I was at the Beijing games in 2008 and one of the lessons we took away from that was that full stadia create the best atmosphere, it's best for the athletes, it's more fun for spectators, and it has been an absolute priority," Hunt said.

"It is a shame this happened but we are going to do everything we can to make sure we fill up those stadia."

By early June, 7 million of the total 8.8 million Olympic tickets had been sold, and about half of the 2.45 million Paralympic tickets, in a process that began last year.

But the combination of a complex and opaque online ticketing system which appeared unable to cope with the huge demand and seemed skewed towards those prepared to bid for thousands of pounds worth of tickets, resulted in a wary public.

About a quarter of the 928,000 tickets made available in May failed to sell, including for popular sports such as beach volleyball and boxing.

In early June, LOCOG still had about 550,000 tickets to sell with just weeks to go.

A large chunk of them were so-called contingency tickets which had been held back while logistics such as TV camera positions were resolved.

On a walk around the park, a Reuters correspondent found he could buy a burger from McDonald's at lunch time in four minutes flat from back of the queue to food in hand, plenty of empty picnic table seats at most of the eating areas and a vast Champagne & Seafood restaurant with fewer than 10 people inside.

Across the park, almost every visitor asked praised the ease of getting around, the lack of queues and the spacious feel of the park, the swift access to facilities, drinking water, open spaces and the friendliness of the staff.

Kyle Sutherland, a 22-year-old American sports management student on a course in London told Reuters he had been touring sports facilities all over Britain and been to many in the United States, but said the Olympic Park felt the most open.

"The park is so spacious it doesn't feel crowded with the amount of people in it."