One dead after US Navy fires on fishing boat 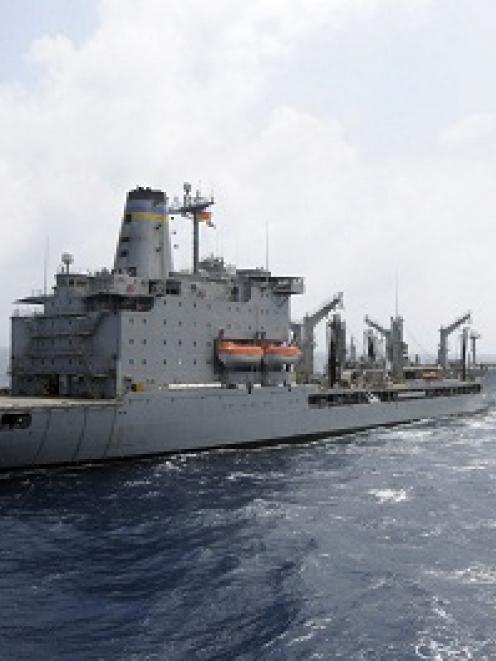 The US Navy supply ship USNS Rappahannock is shown in this file photo. REUTERS/MC3 Cale Hatch/US Navy/Handout
One person was killed and three others injured today when a US Navy ship fired at an approaching fishing boat off the United Arab Emirates, but officials did not immediately blame terrorism or cite an Iran-link to the still-murky incident.

Why the boat approached  the US refuelling ship, the USNS Rappahannock, was still unclear, US officials said. But the US Navy said the small motor boat ignored repeated warnings to halt its approach before a security team fired rounds from a .50-calibre machine gun.

Even small boats dwarfed by the size of the US vessel can still pose a threat. Two suicide bombers rammed an explosives-laden boat into the USS Cole in 2000, blowing a massive hole in its side and killing 17 US sailors.

But the incident was also reminder of how quickly a confrontation can turn deadly in the Gulf, where tensions with Iran have triggered military buildup by the United States and its allies.

Those killed and injured in Monday's incident were not Iranians and it was unclear whether the incident may have been a mere misunderstanding. The UAE state news agency, quoting a government official, identified all of the dead and wounded as Indian nationals.

The shooting took place in the waters near the UAE port of Jebel Ali, US Naval Forces Central Command said in a statement.

"The US crew repeatedly attempted to warn the vessel's operators to turn away from their deliberate approach," it said, adding the incident was under investigation.

The incident came as the US military has bolstered its presence in the region, sending additional fighter jets, deploying a floating naval base and doubling the number of mine-sweepers in recent months.

Iran renewed threats on Sunday to close the Strait of Hormuz, through which 40 percent of he world's seaborne oil exports pass, unless sanctions imposed over its nuclear program are revoked.

Shortly before news of the shooting incident broke, the Pentagon announced it was accelerating the deployment of an aircraft carrier strike group to the Middle East, assuring that the United States keeps two of the massive nuclear-powered ships and their entourages of warships in the tense region.

Pentagon spokesman George Little was vague about the motives behind the decision to send in the USS John C. Stennis roughly four months ahead of schedule. But he denied it was tied exclusively to Iran.

"This is about a wide-range of US security interests in the region. We're always mindful of the challenges posed by Iran but let me be very clear -- this is not a decision that is based solely on the challenge posed by Iran," Little said.