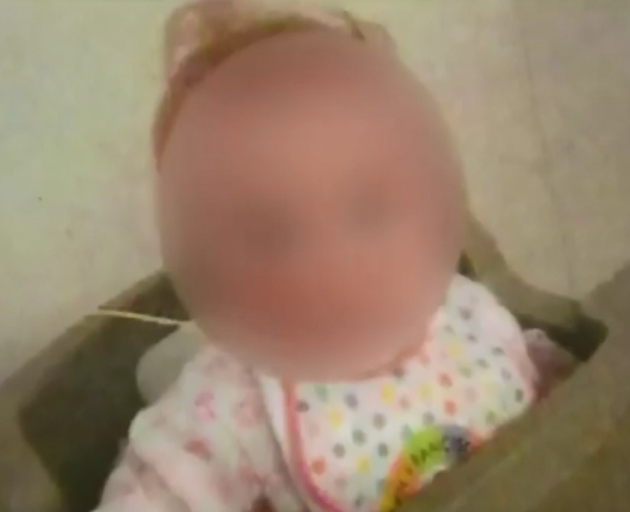 The girl was fed half a cup of oats for breakfast, a slice of bread for lunch and two sultanas for a snack. Image: 7 News via Twitter
The Australian parents of a baby girl fed a vegan diet and left severely malnourished have been sentenced to 300 hours of community service but spared jail.

The Sydney pair, who can't be identified for legal reasons, pleaded guilty in 2018 to failing to provide for a child causing danger of serious injury.

Vegan parents, who admitted failing to provide the necessities for their severely-malnourished baby, have avoided jail. The little girl developed rickets and was grossly underweight. In sentencing, the judge said they had failed in their duty as parents. @BryanSeymour1 #7NEWS pic.twitter.com/SRQ17lVIEl

They were sentenced on Thursday to an 18-month intensive corrections order in Downing Centre District Court.

The toddler, now aged three, was so malnourished by the time she was 19 months old she did not have any teeth and looked like a three-month-old.

She also suffered from a preventable bone disease which had caused minor fractures, and was not vaccinated.

Now living with other family members in Queensland, her health has improved but she requires ongoing speech therapy and physiotherapy, still takes drugs and supplements to boost growth and remains physically and mentally below average.

The parents' older two sons, aged 4 and 6, also live in Queensland. They were not considered significantly malnourished but were behind on vaccinations.

The parents, both in their 30s, maintain intermittent contact with the children but have lost custody.

Judge Sarah Huggett said the neglect was reckless rather than intentional but remained at the higher end of offending.

"It's the responsibility of every parent to ensure the diet they provide children is balanced," she said.

"That responsibility remains a very important one regardless of dietary preference. There must have been occasions to appreciate (their) daughter was not thriving."

Authorities were alerted when the girl was hospitalised after a seizure at the family's eastern suburbs home in March 2018.

At the time, she weighed 4.89kg and hadn't visited a doctor since leaving hospital as a newborn.

The toddler presented with blue lips and cold hands and feet, had low blood sugar and calcium levels, and little muscle tone.

She was unable to crawl or sit up unaided, had nil bone development, swollen legs due to fluid build-up and was yet to speak.

When placed on a normal diet in April 2018 and given extra support, she quickly began to grow and her teeth emerged.

Judge Huggett said the parents had been inconsistent and untruthful, telling authorities the girl had occasionally eaten animal products, would soon be vaccinated, had seen doctors and been growing.

Now separated, they have taken parenting courses since their arrest.

The mother has sought support for natal and postnatal depression which she said made her feel worthless, apathetic and listless.

Judge Huggett said there was a low risk of reoffending but sentenced both to an intensive corrections order to send a message of deterrence and denunciation.

She dismissed the father's claim he had a limited role in the girl's care and should receive a lesser sentence.

Both parents wept in the dock.