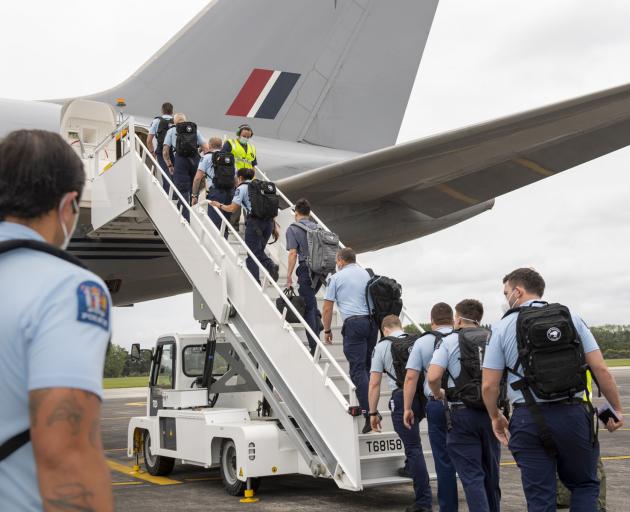 Police depart RNZAF Base Auckland for the Solomon Islands on a Royal New Zealand Air Force Boeing 757. Photo: NZ Defence Force
A team of New Zealand police and army personnel have departed for Solomon Islands today to aid in efforts to restore peace after riots erupted over the past week.

The island nation has been roiled by civil violence in the past week, resulting in the torching of most businesses in the capital Honiara's Chinatown district.

Rioting and looting has been fanned by protests calling for the removal of Prime Minister Manaseeh Sogavare.

Two planes transported New Zealand army and police personnel, vehicles and other equipment from the Auckland and Ōhakea RNZAF bases on Saturday morning.

Foreign Affairs Minister Nanaia Mahuta has said New Zealand's teams would support about 200 soldiers and police personnel from Australia, Fiji and PNG who were already there.

"In relation to the rioting, the damage to property, the impact on the community, it is a matter for us to support as we have been asked to. We will do that as a third party state," she told RNZ.

Earlier this week, 15 New Zealand Defence Force personnel flew to the Solomons, with about three dozen more going this weekend.

Regional governments who have sent security forces to Honiara have indicated they do not expect the mission to be more than a month.

Only personnel who are double-vaccinated against Covid-19 will be deployed, and they will also be required to have a negative Covid-19 test before departing.

Upon arrival, the Solomon Islands' protocols will be observed and personnel will also have to complete managed isolation upon returning to New Zealand.