Pope praying schism can be thwarted 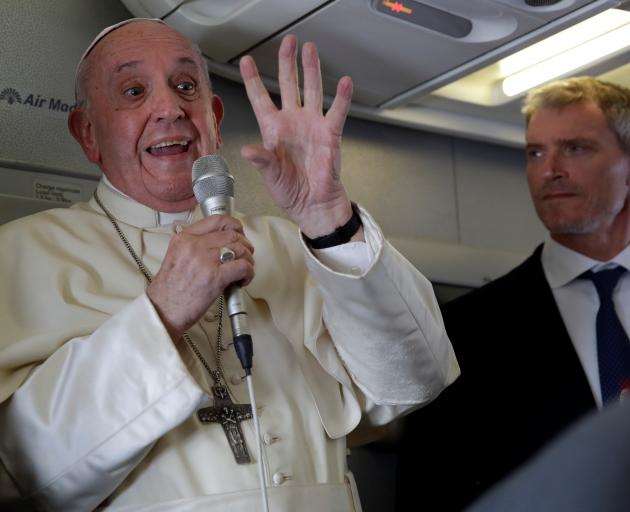 Pope Francis has been the butt of criticism from a small but powerful number of US conservatives unhappy with his stands on various theological issues and social matters from immigration to climate change. Photo: Reuters
The Pope says he has prayed that dissent from American Catholic conservatives would not lead to a schism in the Church and is willing to listen to critics and make corrections if necessary.

But in frank comments to reporters aboard the plane returning to Rome from a trip to Africa, Francis said on Tuesdsay he was not afraid of a schism.

Some of his critics had allowed political ideology to infiltrate religious doctrine, he said.

It was the first time Francis has spoken so openly about the possibility of a schism in the 1.3 billion worldwide Roman Catholic Church, albeit in answer to a question.

Francis also implied that some of his critics were hypocrites for accusing him of being "a communist pope" even though he was saying the same things about social issues that had been said by the late Pope John Paul, who many conservatives consider an icon.

Francis has been the butt of criticism from a small but powerful number of American conservatives unhappy with his stands on various theological issues as well as social matters from immigration to climate change.

An American reporter asked him about the attacks from conservative clerics, Catholic television stations and websites in the increasingly polarised US Church. Some have demanded his resignation, saying he is sowing confusion about moral issues, such as homosexuality and divorce.

"I am not afraid of schisms," Francis said in a 10-minute response, adding that there had been many in the 2000-year history of the Church.

"I pray that there won't be any because the spiritual health of many people is at stake," he said.

The critics' spiritual guru is US Cardinal Raymond Leo Burke, the former archbishop of St Louis who stepped up attacks after the pontiff demoted him from a senior Vatican post.

"When you see Christians, bishops, priests, who are rigid, behind that there are problems and an unhealthy way of looking at the Gospel," Francis said.

"So I think we have to be gentle with people who are tempted by these attacks because they are going through problems. We have to accompany them with tenderness."

Some conservative political movements in the United States have joined forces with religious conservatives to attack the Pope. They reject the Francis' stands on social issues such as climate change and immigration and back Catholic conservative groups who attack his doctrinal stands, such as allowing divorced Catholics to receive communion.

The Argentine pope implied in his response that he believed that political ideology was colouring conservatives' views of his six-year papacy.

"The things I say about social issues are the same things (Pope) John Paul said. I copy him (and they say) 'the pope is too communist,'" Francis said.

"Ideology is infiltrating doctrine, and when ideologies slip into doctrine, there is the possibility of a schism."

The Pope said he accepted "loyal criticism" but not from those who dispense it piecemeal via "arsenic pills" nor from those who "throw a stone and then hide their hands."

Some anti-Francis blogs and websites, particularly in Italy, host anonymous attacks and letters by people the bloggers say are current or former Vatican officials.

The last schism was in 1988 when ultra-traditionalist French Archbishop Marcel Lefebvre ordained bishops without papal permission, starting his own movement.

The pope is compromised. The Catholic church has been under attack for 2000 years. The attackers don't want to destroy the church, they want to control it, as they are afraid of it. Jesuit's are not what they once were. Let us pray for Benedicts sins.

Man is fallen, yet the message of Christ is divine.