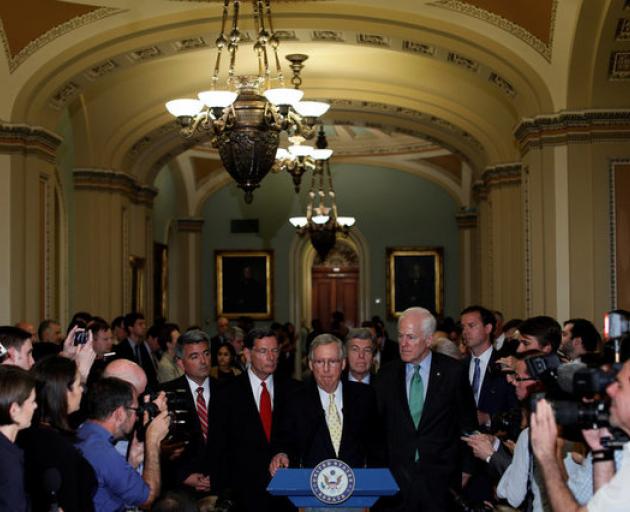 The disarray in the Republican-controlled Senate rattled financial markets as it cast doubt on the chances of getting Trump's other domestic policy priorities, such as tax reform, through a divided Congress.

Trump said he was disappointed by the failure and suggested he might let the insurance markets created under Obamacare go under and then, potentially, work with Democrats on a rescue.

US Senate Republican leader Mitch McConnell announced a vote on a straight repeal of Obamacare, which would take effect in two years, after it became clear on Monday night that he did not have enough support to pass an overhaul of the healthcare law. He said on Tuesday that the vote would take place "early next week."

But prospects for the repeal vote appeared doomed with at least three Republican senators voicing opposition. Moderate Republican Senators Shelley Moore Capito of West Virginia, Susan Collins of Maine and Lisa Murkowski of Alaska quickly announced they would not back repeal. With Democrats united in opposition, Republicans can only afford to lose two votes to pass the measure in the Senate, where they have a slim 52-48 majority.

"I do not think that it’s going to be constructive to repeal a law that at this point is so interwoven within our healthcare system and then hope that over the next two years we will come up with some kind of replacement," Collins told reporters.

The failed effort to replace Obamacare raised new concerns for US health insurers over whether the government would continue to fund billions of dollars in medical benefit subsidies.

US Senate Republican leader Mitch McConnell announced a vote on a straight repeal of Obamacare, which would take effect in two years, after it became clear that he did not have enough support to pass an overhaul of the healthcare law. Photo: Reuters

Obamacare has boosted the number of Americans with health insurance through mandates on individuals and employers, and income-based subsidies. About 20 million Americans gained insurance coverage through the law.

"This has been a very, very challenging experience for all of us," McConnell said, adding that the chamber needed to move on to issues like tax reform and a spending package to bolster the country's infrastructure.

As the healthcare bill collapsed in the Senate, leaders in the Republican-controlled House of Representatives unveiled a budget plan putting a proposed tax code overhaul on the same partisan procedural path that led to the anti-Obamacare initiative’s chaotic downfall.

Republicans had hoped to finish with healthcare before an upcoming August recess so they could tackle a wide-ranging rewrite of the US tax code in September. Separate talks on taxes appear unlikely to reach Trump's pledge to reduce the corporate tax rate to 15% from 35%.

But their failure exposed the sharp divide within Republicans' own ranks, with moderates concerned the healthcare bill's Medicaid cuts would take insurance away from millions of low-income Americans while conservatives backed the cuts and wanted even more dramatic changes to Obamacare.

The US dollar stumbled to a 10-month low against a basket of currencies and US Treasury yields fell after the fresh setback to the healthcare bill raised investors' doubts about Trump's ability to enact tax cuts and infrastructure spending. Reaction in the stock market was muted, and analysts said the expectation for business-friendly legislation out of Washington is all but priced out of the stock market.