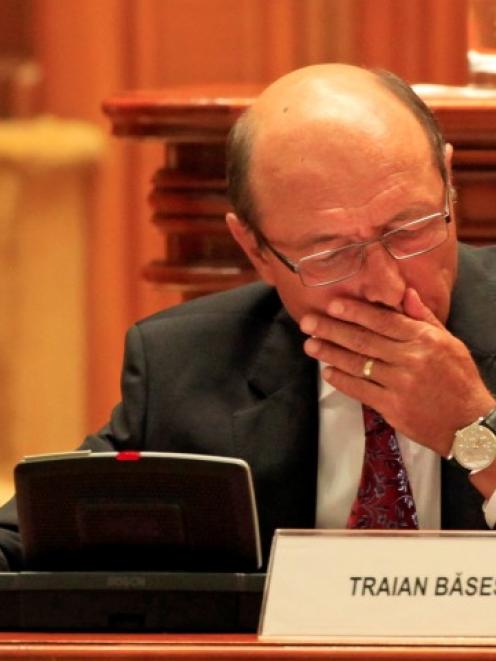 Romania's President Traian Basescu takes notes before the Parliament vote on suspending him over what the ruling Social Liberal Union (USL) says is his attempt to pressure judges and break the constitution, in Bucharest. REUTERS/Radu Sigheti
Romania's parliament has suspended President Traian Basescu, ruling he had overstepped his powers, setting the stage for an impeachment referendum that will be watched by the European Union which says it wants the rule of law respected.

In a vote that tightened the leftist government's grip on power, 256 of the bicameral p arliament's 372 deputies that were present voted to suspend Basescu, the final count showed.

The vote was part of a wider political row that has paralysed lawmaking, hit the leu, and raised doubts about Romania's ability to stick to its 5-billion-euro International Monetary Fund-led aid deal, hurting asset values.

The president is in charge of the country's foreign policy and nominates the prime minister.

Although the role is in part ceremonial, Basescu was able to influence the previous government's austerity policies because of his close links to the centre-right Democrat-Liberal Party (PDL), which led that government.

Antonescu, whose party initiated Friday's vote, will now serve as president during Basescu's 30-day suspension until a referendum decides if he is to be impeached.

The political instability has sparked concerns in the EU, which Romania joined in 2007, about the future of EU-driven justice reforms and Romania's fight against graft.

"We are concerned about the sequence of these events, not one in particular," said Olivier Bailly, a spokesman for European Commission President Jose Manuel Barroso. "And the quick way in which they were adopted."

The Commission has demanded Romania respect the rule of law and the independence of the judiciary. Prime Minister Victor Ponta will travel to Brussels next week for talks with Commission President Barroso.

Ponta's government took office in May and has taken a series of measures to broaden its power in what is the EU's second-poorest country and one that is also in deep recession.

Romania's politics - unstable at the best of times - have been in chaos for months and Ponta is the third prime minister this year, after protests against austerity, cronyism and corruption toppled his predecessors.

Ponta's ruling USL backtracked on a plan to replace Constitutional Court (CCR) judges after international criticism, but is now issuing emergency decrees that take immediate effect before the court can rule on them.

The government had a long list of reasons for suspending Basescu, including what it said was his attempt to pressure judges and break the constitution.

Basescu, who walked out of parliament before the vote, is unpopular for backing austerity measures, including salary cuts and raising sales tax.

He has said the charges are political. "The main objective of this suspension is to get the judiciary under control," he said.

The suspension is an attempt to undo his efforts to clean up the judiciary and to distract attention away from plagiarism allegations against Ponta, he has added.

Ponta, who has been jokily dubbed "Mr Copy Paste" by some, removed the authority of an academic panel just before it concluded he had copied a large part of his doctoral thesis.

A referendum will now decide whether to impeach Basescu. The result may depend on whether the CCR - which has accused the government of trying to dismantle it - accepts a USL law that changes how many votes are needed to win it.

The leu hit a low of 4.541 per euro, before regaining some ground, while borrowing costs have also risen.

However, the government denies it is endangering the rule of law, saying it is sticking to the IMF deal. It argues the row will hurt neither the justice system nor the economy.

The leftist USL remains favourite to win a parliamentary election later this year, though there have been no opinion polls in the last month. If Basescu is impeached, the USL would probably win the presidency.

But holding three elections - a referendum, a presidential and a parliamentary poll - in such a short time would further delay reforms under Romania's IMF deal. The IMF has said it wants Bucharest to overhaul energy prices along with the outdated health system and to sell inefficient state assets.