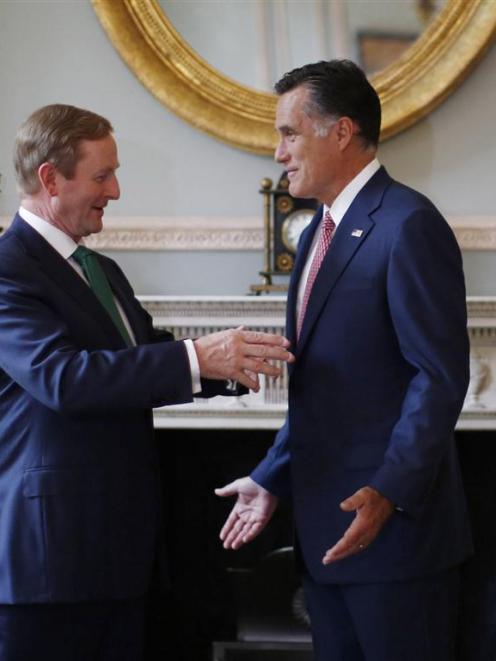 "Sometimes I think some Americans should not leave the country," Carl Lewis, a retired US sprinter and long jumper who won 10 Olympic medals, told The Independent newspaper.

"Are you kidding me? Stay home if you don't know what to say."

After a gaffe-filled day in which Romney came under criticism in Britain and in the United States for questioning whether London was ready for the Summer Games, the likely Republican party presidential nominee kept a low-key schedule that included a meeting with Ireland's prime minister Enda Kenny and a visit to Friday night's opening Olympics ceremony.

The former Massachusetts governor was overheard joking to Kenny that his state, home to many Irish Catholics, "is almost a part of Ireland".

Romney, who led the 2002 Salt Lake City Winter Games, otherwise seemed focused on merely basking in the glow of the opening ceremony, but back home some fellow conservatives joined Democrats in debating the impact of his flubs, which included a not-so-discreet mention of having met with "the head of MI6," Britain's secretive intelligence agency.

"All Romney has to do is say nothing," Krauthammer said.

"It's like a guy in a 100-metre dash. All he has to do is to finish; he doesn't have to win. And instead, he tackles the guy in the lane next to him and ends up disqualified. I don't get it."

A Republican official who supports Romney declared that "the front end of the trip is wiped out".

"What he can do is go to Israel and go to Poland and recover," the strategist said.

Trying to gain control of a trip designed to show that he is comfortable on the international stage, Romney appeared on NBC's "Today" show.

He tried to make amends by saying that the Summer Olympics in London will be impressive, and that "after being here a couple of days, it looks to me like London is ready".

Many Republican officials back in the United States said they have not liked what they've seen from Romney during his trip, which also will include a stop in Poland.

However, most said they did not believe it would change the dynamic of Romney's tight race against Democratic President Barack Obama in the November 6 election.

The presidential race is focused mostly on the sluggish U.S. economy, and Obama got bad news on Friday that gross domestic product growth slowed to 1.5 percent in the second quarter, a troubling indicator that the Romney campaign pounced on.

David Yepsen, director of the Paul Simon Public Policy Institute at Southern Illinois University, said Americans expect their political leaders to perform well on the global stage and the trouble on the London portion of Romney's trip was not a good start.

"I think it's one of those threshold tests," Yepsen said. Americans "expect (presidential candidates) to be good and competent political leaders. I don't think they get any prize for doing that. I think they're expected to do that. When they make mistakes, when they look bad, that could hurt them."

Romney's campaign signaled its desire to move beyond the missteps in London by arranging a conference call with senior Romney aides about the plans for his visit to Israel. He arrives on Saturday afternoon and has talks with Prime Minister Benjamin Netanyahu and other Israeli officials on Sunday.

"Romney must now focus his attention on Israel and Poland to show that can accomplish international diplomacy without turbulence," Republican consultant Ron Bonjean said.