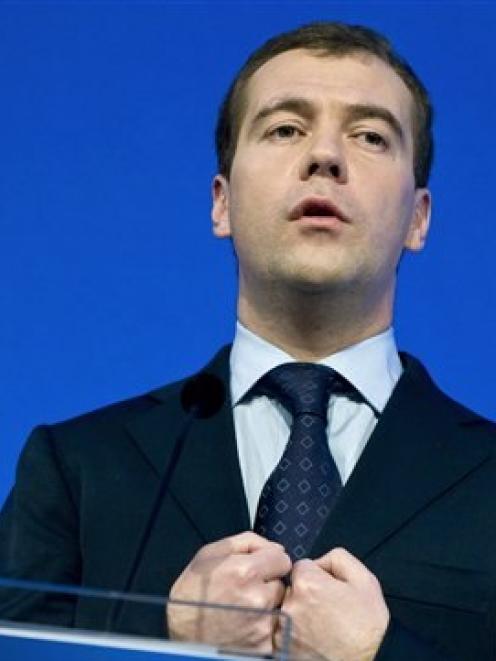 Russian President Dmitry Medvedev speaks during a press conference during the European Union and Russia summit in Stockholm, Sweden. (AP Photo/Scanpix Sweden, Claudio Bresciani)
Russia indicated today it is ready to slash its greenhouse gas emissions by as much as 25 percent, if other countries do the same, the president of the European Union said.

The pledge, made during an EU-Russia summit in Stockholm, was the latest indication that Russia and the bloc are improving their strained relations and renewing their strategic cooperation. On Monday, they agreed to create an early warning system regarding energy supplies to prevent a fiasco like the one last winter when Moscow cut off natural gas supplies to western Europe.

"This was one of the best summits we've had so far," European Commission President Jose Manuel Barroso at the one-day meeting.

Relations between the EU and Russia, whose bilateral trade last year was $382 ($NZ521) billion, suffered a major setback over the past year due to the war in Georgia in August 2008 and the dispute over natural gas supplies last January.

"I am quite satisfied," said Russian President Dmitry Medvedev. "We managed to discuss issues in a constructive manner, without the emotions that have hindered previous meetings."

Swedish and European leaders placed emphasis on climate change, given the UN conference on global warming in Copenhagen next month. They wanted to persuade Russia to cut greenhouse gas emissions, and may have succeeded.

"I very much welcome the signal from President Medvedev today of their (Russia's) proposed emission reduction target of 25 percent," said Barroso.

Previously Russia has said it is willing to cut emissions by 10-15 percent from 1990 levels, while EU members are committed to 20 percent reductions by 2020.

On trade, EU leaders urged Russia, which is the EU's third largest trading partner, to join the World Trade Organisation as quickly as possible - and here too they received an upbeat message from Russia's president.

"For us, the main thing is speed. Whatever path is the shortest, that's the path we'll take," said Medvedev.

Russia is the only major world economy that is not a WTO member, and Moscow recently stepped back from its insistence that Russia only join the trade regulator together with Kazakhstan and Belarus. The EU had criticized the earlier position, saying it would delay Russia's membership in the World Trade Organisation.

As always, energy issues occupied a central position at the summit - the 24th between the EU and Russia. Prime Minister Vladimir Putin warned last week that Russia would again close the valves on gas pipelines flowing west, if Ukraine fails to pay for its shipments or begins siphoning illegally - a warning that raised the hackles of some EU leaders.

To prevent a repeat of January's fiasco, the two sides agreed to create an early warning system comprised of information exchange, onsite inspections, and advance warnings in cases when energy supplies are deliberately severed.

Russia is the EU's largest energy supplier, providing 20 percent of the bloc's natural gas needs through the Ukrainian pipeline.