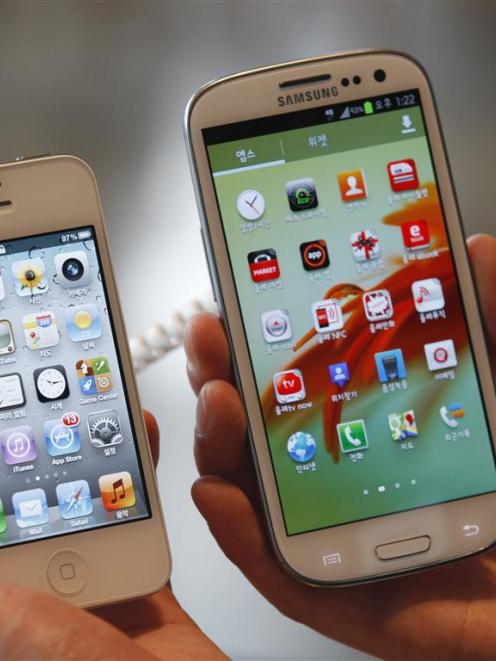 An Apple iPhone 4S (left) and a Samsung Galaxy S III. REUTERS/Lee Jae-Won
Apple scored a sweeping legal victory over Samsung otoday as a US jury found the Korean company had copied critical features of the hugely popular iPhone and iPad and awarded the US company $US1.05 billion in damages.

The verdict - which came after less than three days of jury deliberations - could lead to an outright ban on sales of key Samsung products and will likely solidify Apple's dominance of the exploding mobile computing market.

Apple's victory is a big blow to Google, whose Android software powers the Samsung products that were found to infringe on Apple patents. Google and its hardware partners, including the company's own Motorola unit, could now face further legal hurdles in their effort to compete with the Apple juggernaut.

Samsung lawyers were grimfaced in the quiet but crowded San Jose courtroom as the verdict was read, and the company later put out a statement calling the outcome "a loss for the American consumer."

The jury deliberated for less than three days before delivering the verdict on seven Apple patent claims and five Samsung patent claims -- suggesting that the nine-person panel had little difficulty in concluding that Samsung had copied the iPhone and the iPad.

Apple upended the mobile phone business when it introduced the iPhone in 2007, and shook the industry again in 2010 when it rolled out the iPad.

It has been able to charge premium prices for the iPhone - with profit margins of as much as 58 percent per phone - for a product consumers regarded as a huge advance in design and usability.

The company's late founder, Steve Jobs, vowed to "go to thermonuclear war" when Google launched Android, according to his biographer, and the company has filed lawsuits around the world in an effort to block what it considers brazen copying of its inventions.

The legal win today came one year after CEO Tim Cook assumed the helm of the company. Shares in Apple, which just this week became the biggest company by market value in history, climbed almost 2 percent to a record high of $US675 in after-hours trade.

Brian Love, a Santa Clara law school professor, described the verdict as a crushing victory for Apple: "This is the best-case scenario Apple could have hoped for."

The verdict comes as competition in the mobile device industry intensifies, with Google jumping into hardware for the first time with its Nexus 7 tablet, and Microsoft's new touchscreen friendly Windows 8 coming in October, led by its "Surface" tablet.

Apple's victory could present immediate issues for companies that sell Android-based smartphones and tablets, including Google's own Motorola subsidiary, which it acquired last year for $12.5 billion, and HTC of Taiwan.

Amazon - which has made major inroads into the tablet market with its cheaper Kindle Fire - uses a modified version of Android for its Kindle products but has not yet been subject to legal challenge by Apple.

"It doesn't take a rocket scientist to look at it and figure it out," he said. "Prior to the iPhone, none of the phones were like that. Android, if you look at it, is very similar."

Some in the industry say Apple's legal offensive is bad for consumers.

"Thx Apple it's now mandatory for tech companies to sue each other. Prices go up, competition & innovation suffer," Mark Cuban, an Internet entrepreneur and owner of the Dallas Mavericks basketball team, said in a Twitter message.

But the legal battles are far from over. In a separate but related case, Apple has won a pre-trial injunction against the Google Nexus tablet. Another lawsuit, against Motorola, was thrown out recently by a federal judge in Chicago, but litigation between the two at the International Trade Commission continues.

Still, the trial on Apple's home turf - the world's largest and most influential technology market - was considered the most important test of whether Apple would be able to gain substantial patent protection for the iPhone and the iPad.